The most fun chapter of my life so far just closed.

A guy about 18 years old drove away with my boat last night. He is a super sweet kid, though. He was so excited to get it, and I’m really glad it is going to someone who will love it like I did!  He was so nice. He is the brother of a girl that my cousin was good friends with in high school, so in a convoluted way I kinda felt like he was kin.  He brought a friend and we all rode down to the lake on Tuesday for him to test drive it.  It was the last time I’ll ever be in the boat, and one of the few times I’ve ever ridden in the passenger’s seat.  He grew up a river rat like me, and he was a natural with the boat so I know he will be just fine with it. I went to shake his hand as he was leaving with the boat and he gave me a hug and told me he would take good care of it. I broke down crying as it turned the corner and went out of sight. I hope he makes some awesome memories in it. As many as I have made or more.

I bought it when I was 22 years old and single and I was so proud to be a boat owner. My friend Lori’s dad helped me buy it from his buddy in Selma, and he showed me how to drive it because I’d never even driven a boat until I started looking for one. The first day I took it out by myself Lori and her mom were with me. I forgot to trim the motor down when I took off so the boat stood straight up in the air. When I pulled back on the throttle it came crashing back down and a huge wave washed over the back end of the boat. Lori’s mom screamed “TAKE ME BACK TO SHORE!” and left us alone to fend for ourselves. I had so much learning to do. I jackknifed the trailer so badly while learning to back it up that I had to get a new hitch welded on to it (and rode around with a crooked bumper on my truck).

Here is me driving it on the day I nearly threw Lori’s mom out of the boat.  My very first day on the water with it: 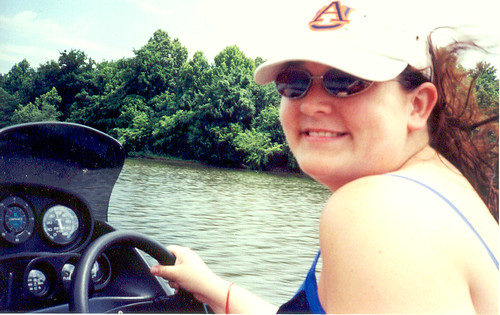 I laughed and I cried and I prayed and I fried in that boat.  I was in it the first time I saw an alligator up close and personal on the Alabama River.  I pulled countless people on the inner tube and the kneeboard, sometimes even in the rain and as the sun was setting behind us. I would take anyone who showed a glimpse of interest down to the lake with me so I wouldn’t have to go alone. I befriended an older couple who had just moved into my apartment complex and took them to the lake without even knowing their names. 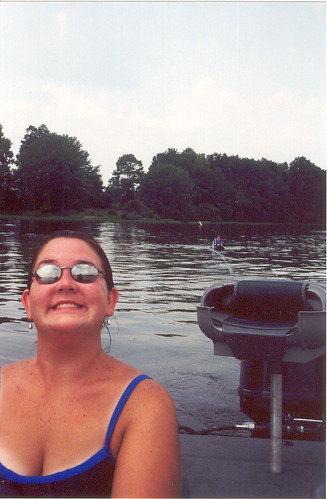 I caught a few fish, not a ton but enough to make me happy. 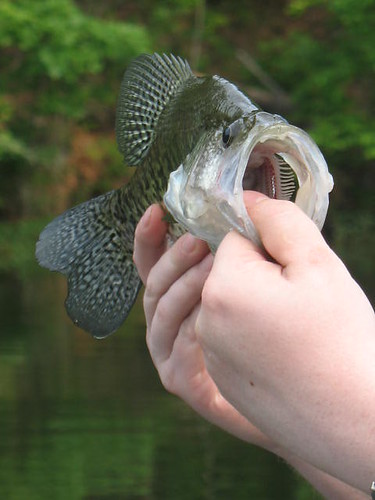 On my 24th birthday I got stung by a bee and broke the fishing rod that my ex boyfriend had given me. I cried over both incidences. 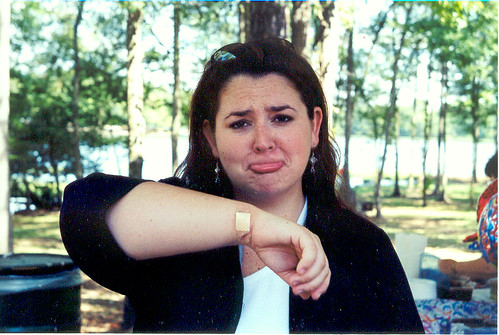 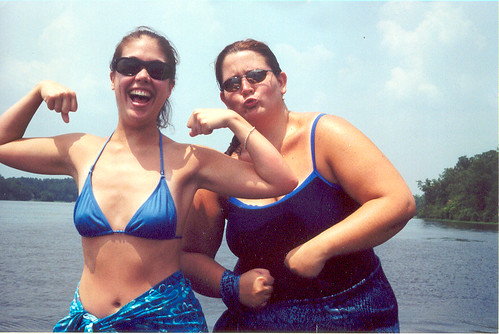 I sat in the dark in the middle of the lake with Cousin Michael and watched a Sheriff’s car pull up to our friends campsite and bust us for camping on private property. We nearly died from trying to contain our laughter at them apologizing and falling all over themselves to get the campsite cleaned up while we floated out in the safety of the boat and didn’t get caught. Then there was the night at 1:00 am on Guntersville when we were riding along and the motor died for no reason. I turned on the spotlight and saw nothing but milfoil weeds for as far as the light would shine. It was wrapped all around the propellor like the worlds largest ball of rubber bands, and Michael had to paddle us out into the channel and pull off all the weeds before the engine would crank again.

I fell out of the boat and nearly broke my ribs on the edge of the pier while my mom yelled and tried to catch me. I probably would have pulled her in with me so I chose to fall into 50 degree water in the middle of February to avoid hurting her. One of the worst pains I’ve ever experienced. I took the lid off of one of the compartments so my sister could lay on her stomach when she was 7 months pregnant and sunbathe. Her little belly fit perfectly inside that hole. I floated down the river and talked for hours to my friends about life and religion and joy and pain. I tried my hardest to kneeboard, and I came close a few times but then the scaredy cat in me got the best of me and I let go of the rope. That didn’t stop me from innertubing all over the lake with Julie at the wheel, ready to sling me up in the air with her slow down, turn and punch it maneuvers. She and I ate so many corndogs from Lake Mitchell marina, and once had a little boy look at us in awe and say, “That’s a dang nice boat you got there.”. Julie and Martha and I spent countless hours floating and reading magazines and picnicing by the waterfall at Lake Mitchell, sunbathing and listening to the radio. We were always nervous when we had to launch the boat in front of all of the tournament fishermen. They watched us like we had three heads when we pulled that boat out in front of them. 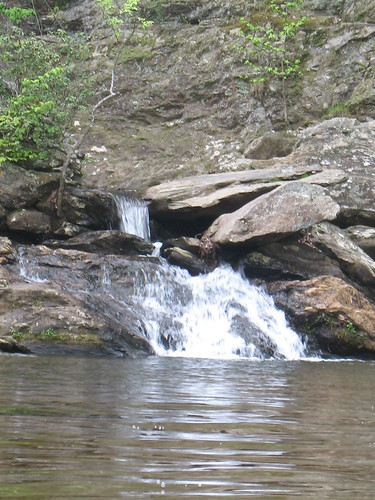 I had the satisfaction of parking my boat nose to nose with my ex boyfriend’s boat at Higgins Ferry one day. He saw me from his seat at the campground and came running down the hill yelling my name. I thoroughly enjoyed looking at my sparkly green Javelin next to his white old man boat.  It got even better when I showed him that I could back up a boat trailer as well as he could (after years of practice, I had gotten pretty good). He never would let me drive his boat or back up his trailer, so talk about a “How do you like me now?” moment when he saw that. Then a few months later Julie and I were driving down I-65 pulling the boat behind us when she saw his engagement announcement in the Birmingham News. We always skimmed the engagement announcements and when she saw his announcement her face fell and she looked at me with sympathy. I asked her what she had seen, and she told me it was him. I was happy for him and heartbroken for me all at the same time. For three years of my life I was sure that I was going to be the one in the newspaper showing off my ring from him. But I guess that just wasn’t in the cards for us.

I met Uncle Ed of Blue Creek Marina, a 90 year old man who sat on the front porch and spun stories that would make you smile for hours. He had carved “No smoking” signs in four different languages to hang all around the gas pumps. He said he didn’t want any Germans or Frenchmen to blow themselves up just because they couldn’t read his sign. He had handwritten signs hung all over the bulletin board on the porch of the store. My favorite said, “Don’t do unto others until they do unto you. Then WHAMMO!” He had a walking stick carved out with the story of the U2 Bleeth. I can’t remember the story, but I remember how enchanting it was when he told it on the weathered porch of the old store. Uncle Ed was one of the coolest old dudes you would ever meet. I cried the spring day I walked into the store and asked where he was and his son told me he had passed away during the winter.

I layed on the deck under the stars and prayed for a husband. When the man of my dreams finally came along he asked me to marry him while sitting on that same deck of my boat. Then we got married a year later on the very same lake where I prayed and he proposed. 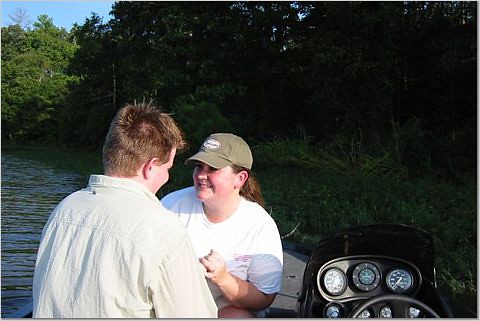 After a few years of marriage we fulfilled our dream of owning a lake cabin and that boat followed me to our very own boathouse where it sat proudly on the slings and was ready to go at a moment’s notice. 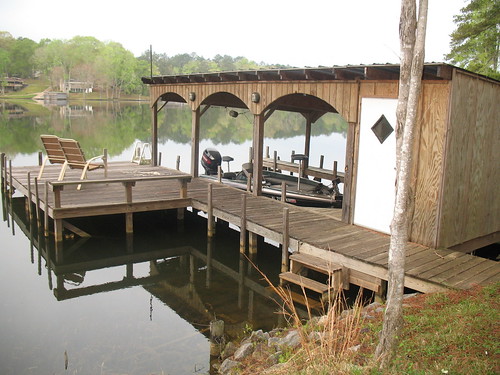 I was in that boat with J the first time we ever attended River Church, where the preacher stood on the pier and broadcasted his sermon out to the whole lake. Some of my most theraputic and relaxing times were spent alone on that boat. I told J that I found God more often on my boat than I did in any church I had ever attended.

I fished from that boat when I was just days pregnant with Garrett, and then days turned into weeks and months until I felt too sick and hot to go out in it. Then in my second trimester I got a second wind and went out again. I would get up at the crack of dawn and sneak out of the cabin leaving J to sleep so that I could go fishing alone. We bought the pontoon boat when I was about 5 months pregnant, because we knew that we would want to have a smoother, safer, and more stable ride for our baby when he arrived. And that’s exactly what we got on his very first boat ride – a nice relaxing trip on the lake with his Daddy and Papa and me. 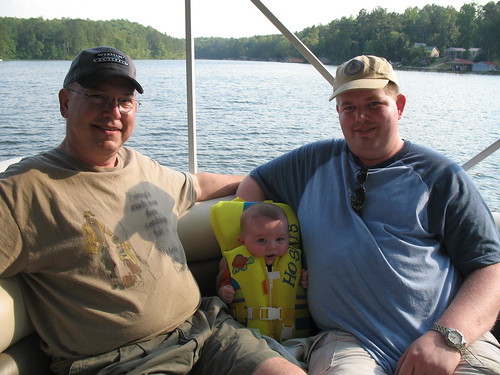 After Garrett was born we stopped using the bass boat completely, and I knew it was time to let it go and watch someone else have a good time with it. 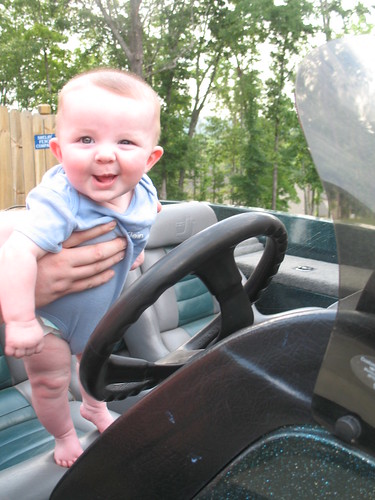 I am completely and totally going to miss that boat. I loved it so very much, and it will always have a piece of my heart in it.

Goodbye, BOBB. Thanks for the good times. 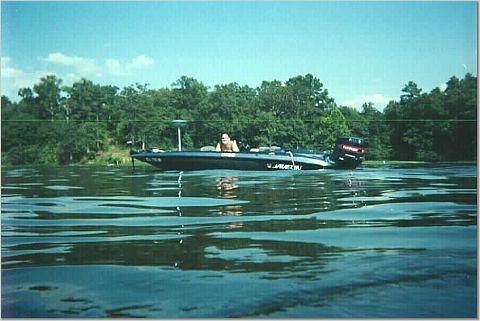 « A Day In The Life – aka the Five Month Update
Finally, adulthood comes to my bedroom. »

« A Day In The Life – aka the Five Month Update • Finally, adulthood comes to my bedroom. »