Well, here we are. 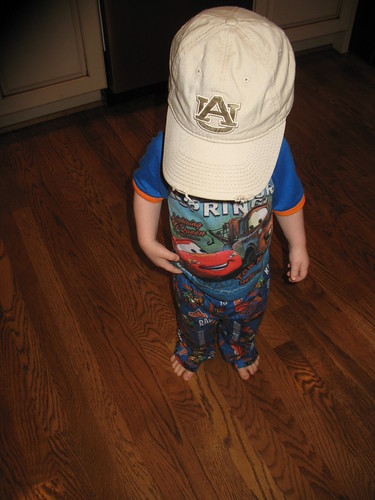 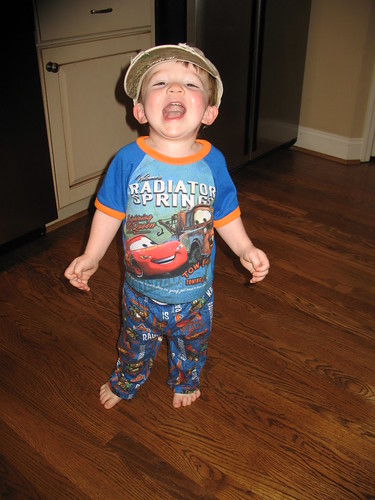 One and a half.

Six months away from the terrible twos.

And smack dab in the middle of the awful alligator acting eighteen months. I call him a gator because he is strong as an ox an immediately begins a death roll whenever I say the words “put on your clothes” or “change diaper” or “get in the carseat”. Everyday is like a WWE Heavyweight Championship match, and I am constantly defending my World Title. After every diaper change I stand on a table and hoist my big gold belt in the air and scream “I AM THE AYATOLLAH OF DIAPAH ROLLAHS!!” 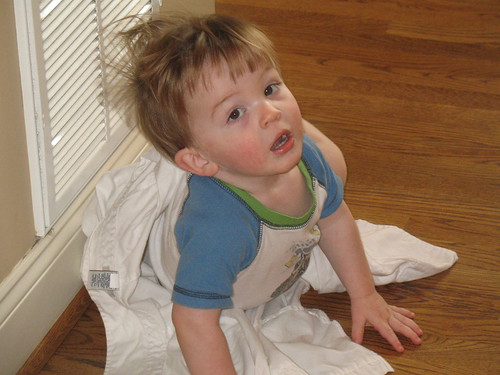 Garrett has gotten a lot more unsupervised freedom to wander lately, which so far (knock on wood) he hasn’t abused too bad. Except for this morning when I found him sitting in my shower chewing on the pumice stone. I was too grossed out to take a picture.

When we go down to the basement every morning he walks down them like a big boy. We hold hands and take one step at a time until we are both at the bottom. It’s taken a load off of me from having to carry him, but that doesn’t make it any less nervewracking. Once we make it to the bottom he runs around behind the lawnmower and tries to hide from me so I won’t strap him in the car seat. He’s fast and he’s silent, and that makes for a scary combo. In one instant he will be standing by my leg and the next he will be on the other side of the car trying to figure out how to open the gas tank. The troubling part is when he disappears like that I have no way of knowing where he is gone because he won’t answer me when I call. I say “Garrett, where are you?” and there is no answer.

So I have consulted the DJ Kool and Doug E. Fresh Handbook for Raising Toddlers and decided to try to teach Garrett when I say “Hey!” he says “Ho!” so that I can keep track of where he is at all times. Here is a video of us working on our Hey! HO! Hey! HO! but we still haven’t mastered that quite yet.

When I say Hey! You say Ho!, originally uploaded by meezealeeze.

His stats at his last appt. were 26.5 lbs (50th%) and 34″ tall (90th%) and his head circumference was still in the 95th percentile! He got his MMR a month ago. You know me, I was so worried about it, but he did FINE! He had a fever about 10 days after the shot and that was it. No rash, no sixth toe, no compulsive gambling, nothing. 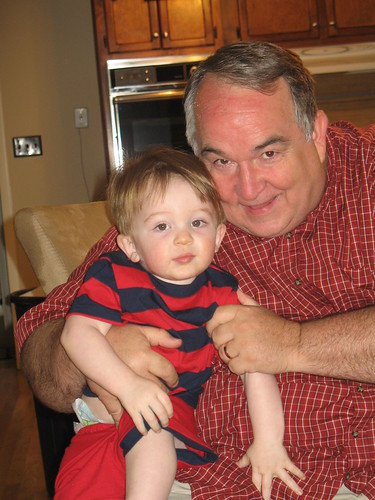 He has gotten a TON of new words in the past month. And he can point to a lot of his (or my) body parts. Eyes, ears, nose, teeth, hair, mouth, belly, etc. When we were getting ready for bed one night a few weeks ago he grabbed his little package and said “DUNK!” which translates to “JUNK!” in Garrettese. That’s what we are calling his boy parts, and I hope it doesn’t scar him for life whenever he passes by a junkyard.

Last week he grabbed a box of raisins from my purse and said “SNACK!” except it sounds more like “Knack!” because he doesn’t prounounce the S sound yet. When we walk up to the door at the office and he knocks on it and said “knock knock!” I am so ecstatic that he is saying new things on his own without prompting. Last night he handed me his cup and said “Hold this.” I’m counting that as his first two word phrase and I love it!! So proud of him.

He is climbing on everything, nothing is safe anymore. High drawers that I thought were out of reach are no longer, and I need to babyproof even further. I’m thankful we bought a convertible crib and we dropped it like it was hot the minute he started pulling up on his own. The thought of him climbing over the side and taking a midnight stroll through the upstairs terrifies me. Cousin Michael’s little boy Evan woke them up at 6 am the other morning by banging on their bedroom door. He had made the great escape and he’s six weeks younger than Garrett! That news alone is enough to make me want to buy a crib tent and lock G inside it every night until he’s eleven. 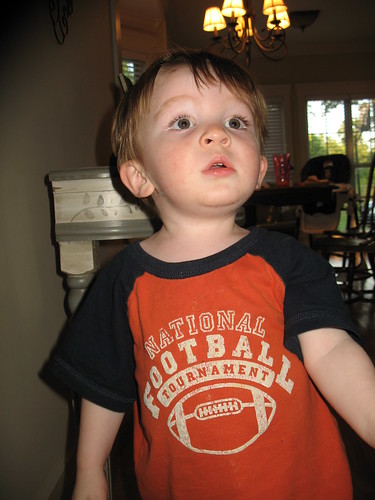 He seems to be clumsier these days, and he keeps getting hurt a lot. Sometimes he will put his arms out and just free fall backwards like he’s stage diving but instead of crowd surfing he just konks his head on the floor. Last week he pulled his Little Tykes table over on himself and busted his lip. Then 10 minutes later he pulled a chair over on his head. He runs into walls or tables or corners of things all the time because he doesn’t watch where he is going and he’s so tall now everything is right at his eye level. Graceful, he ain’t.

You can see the scab on his forehead in this picture during his playdate with sweet Cousin Carter. Every week it’s a new bump, bruise, or bang. 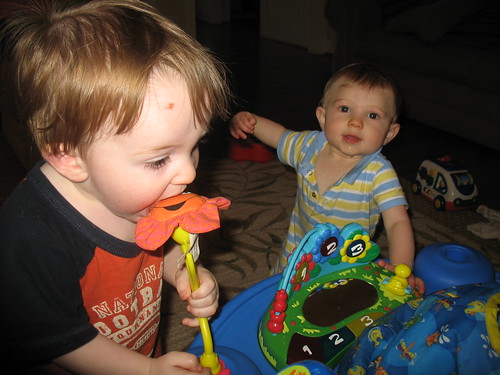 He can follow directions like a CHAMP. I tell him “go pick up that piece of paper and put it in the trash.” and he’ll say “TRASH!” and run and do it. He loves helping me clean up, or sweep, or vacuum or put things away.

Clean up!, originally uploaded by meezealeeze.

This is such a monkey-see-monkey-do stage that I am really rethinking a lot of my own actions these days. When I brush my teeth in the morning I sit him on the sink next to me and he brushes his teeth. He turns on the water and sticks his brush under it and pretends to put the toothpaste on it and everything. When I brush my hair, he brushes his. But I try not to let him see me put in my contacts. Yikes. 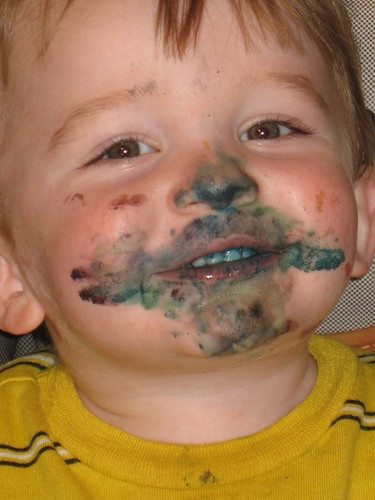 He can work the apps on my iPhone. I bought a few toddler games for him that he loves (Where’s Gumbo, Peekaboo Barn and Balloonimals) I will turn on the app and hand him the phone and he will take it from there. I don’t have to punch any buttons for him because he can work the entire game on his own. It’s amazing to watch. The Ballonimals is a balloon animal game where you blow into the speaker of the phone and it blows up the balloons, then you shake shake shake the phone to make it tie up into an animal shape. He can work it all by himself. I’m amazed at how fast he picks things up. He is smart as a whip and it makes me so proud to watch him grow! I cannot believe how fast he went from tiny baby to big boy.

When we are not jamming out to XM 116 Kids Place Live or practicing our Hey! Ho! routine, he pretends to read his books to me in the car.

But sometimes reading can tucker a little feller out. 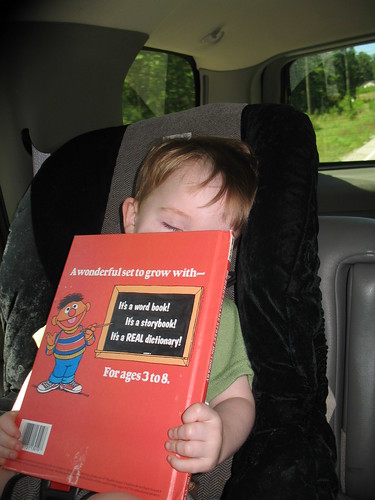 He is obsessed with cars and trucks and things that go. He has his very own Cozy Coupe at the office (and another one or three at Nana’s!) 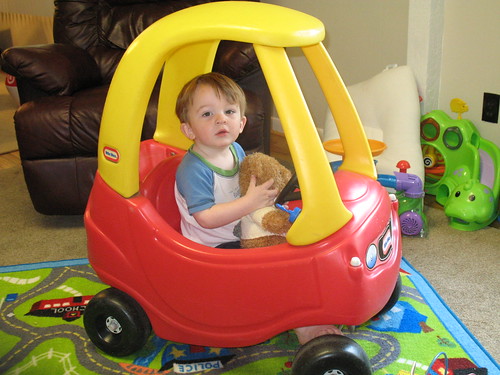 He loves riding around in it and even using it for some high quality tv watching time. 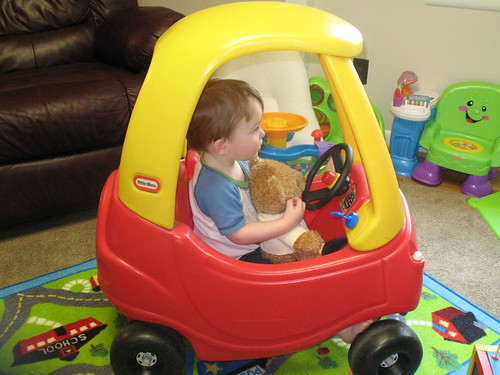 To say that he is obsessed with Little People cartoons is an understatement. I’ve heard enough Aaron Neville verses to last me a lifetime. I’ve spent the last month discovering horses, and giraffes too, discovering me and discovering you. 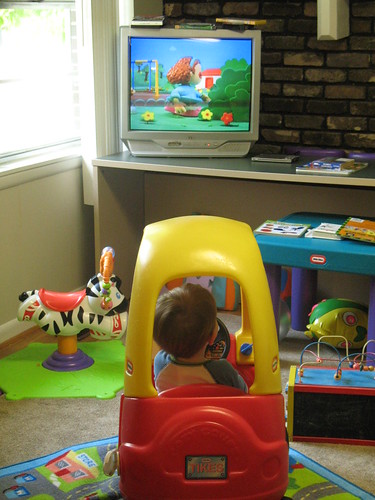 And discovering that I need to stop and enjoy these days when he is still little enough for me to pick him up and force him to give me snuggle time, even if I have to distract him with an iPhone and a tv show.

I love you little dude!
Mama

« Mistah T says “I pity the fool who tries to steal my milkbone!”
Wordless Wednesday: Playdate with Baby Carter »

« Mistah T says “I pity the fool who tries to steal my milkbone!” • Wordless Wednesday: Playdate with Baby Carter »