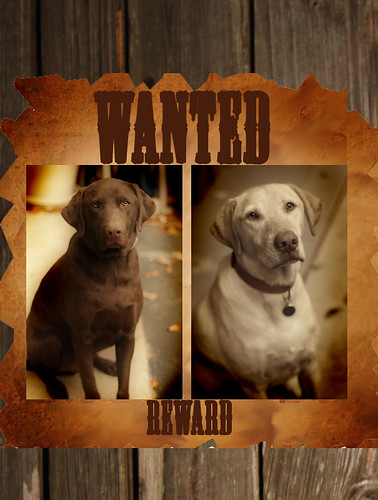 Last month Gus and Woodrow decided to make the great escape from the invisible fence. We had the invisible fence installed for them at the new house so they could have the freedom to roam out in the woods without us having a big wooden fence blocking our view and our circular driveway. We have been in the new house now for what? Like five, six months? The dogs were well trained with the invisible fence. They went through a few intensive weeks of training where we kept them crated and on leash until they learned to stay inside the boundary. They got praised and treated and rewarded like crazy for not crossing the invisible fence line. They did so well that our invisible fence dude never needed to crank up the settings on their shock collars. They were still in training mode when they broke free. We even started leaving their collars off most of the time because they were so well behaved.

That all flew out the window as soon as deer season started stirring in the woods around us. That’s when all heck broke loose.

It all started when we were on our anniversary trip to Vermont. We were gone from home for four days. In addition to babysitting G for us, my inlaws were so gracious to come feed the dogs. Apparently during our little weekend vacation, the dogs decided to make a break for it. They were not wearing their collars at the time because we were sure we could trust them. (Big Mistake #1) When we finally returned from our trip we found them locked inside the pool fence gate with their shock collars around their necks. Like dummies we didn’t call the inlaws to find out WHY they were entrapped like this, we simply put them back outside the pool fence and went about our merry way. (Big Mistake #2) The next morning when we woke up… they were gone. I found them at the neighbors house prancing through the trees like little woodland fairies. ‘

Turns out both of their collars had dead batteries. Apparently they wore out the batteries testing the fences like a pair of velociraptors. I wrangled them home and replaced the battery in both of their shock collars. I felt assured that would keep them safe at home. (Big Mistake #3)

Unfortunately the Call of the Wild and the lure of Bambi jumping in the woods was just too tempting for them. While we were at work that day they broke through the fence yet again to go chasing after the wildlife. I guess their hunting dog instinct was so strong that it was willing to withstand a nice zap from the fence just to get to the other side. This time I was sure they were gone for good. They were nowhere to be found. I called every vet and animal control officer in my area. We spent all afternoon calling for them and canvassing the neighborhoods and acres of surrounding woods around the house and still coming up empty handed. I had a feeling in the pit of my stomach that they would not be coming back to us. It was terrible. The most heartbreaking part was Garrett yelling into the woods “Gus! Ro! Where are you?!”

The first night came and went with me printing hundreds of flyers to be put on every mailbox in a five mile radius. I put up “Missing Dog” signs on the lamp posts and gas stations and stop signs. I posted on facebook to spread the word in the hopes that six degrees of separation would be on my side and help bring them home safely. And still nothing. My sister came over the next morning to help distribute flyers to mailboxes. She must have been the good luck charm, because about two hours after she put up a flyer on a stop sign in a neighborhood close to mine, we got a phone call that someone had found our dogs.

They had curled up on someone’s back deck overnight and the next morning the people found them lying together looking at them through their sliding glass doors. Thank goodness they were dog lovers, because they took good care of them until they could get them back to us. The flyer on the stop sign is what brought them home.

I have never been more overjoyed to see those two crazy dogs. When we finally got them home I put them back inside the pool gate fence. We got the invisible fence man out there to crank their collars up to the highest levels. And that was all it took. There haven’t been any more break-throughs. *knock on wood* They are now both wearing these new Pet ID tags where I can issue an online Amber Alert for them if they get lost again.

Let’s hope we never have to use that service.

« Have yourself a Pear-y little Christmas
Garth Giveaway Winner! »

« Have yourself a Pear-y little Christmas • Garth Giveaway Winner! »