Our house has been on the market now for approximately six weeks and we haven’t had one single solitary showing. Not even a nibble. It’s extremely disheartening because I was really hoping after the holidays things would pick up for us and we would at least get ONE showing. But no. Nothing. Nada.

In an effort to drum up some interest, our realtor has set a date for an open house and a realtor walk-through.

Knowing that is coming has spurred us to clean out some of the excess crap that we have accumulated over the years that is hiding in our closets and under our cabinets. It’s amazing how much STUFF you can cram into the nooks and crannies of a house in just four short years. We spent today cleaning out the kitchen cabinets and the pantry. This was my countertop just a few hours ago: 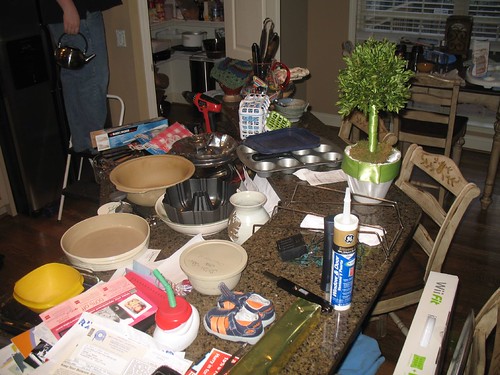 We pulled out all sort of random things, from Royal Caribbean hurricane glasses that we brought home from our 2003 cruise to these lovely Bob Riley 2006 Inaugural wine glasses. 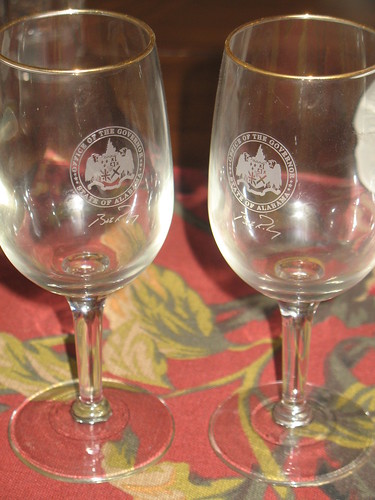 Why I feel the need to hold onto these things for so long, I’ll never know. Must be in my genes. Thanks, Grandma.

Buried deep in the cabinet above my refrigerator was a penis shaped cake pan that I bought when I was planning to throw one of my friends a Bachelorette party. I guess I never got around to baking that cake or throwing that party. But I still have it, because you just never know when you’ll need a good pecker cake pan. 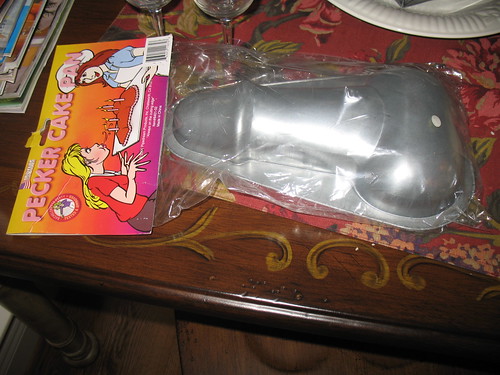 So instead of letting it go to waste J decided to model it for yall. 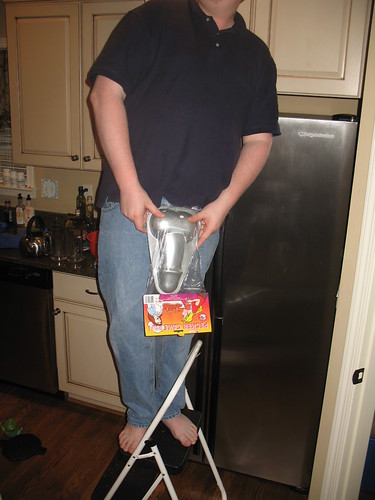 See? I told y’all this was a Keeping it Real post.

J has been working much harder than I have to get things packed up around here. I am so thankful to him for working so hard around here. He gets in these moods and starts packing away boxes of our stuff and scurrying them down to the basement like a squirrel hoarding nuts (no pun intended). This is AWESOME because I sincerely hate packing boxes with a passion that resonates all the way down to the depths of my soul, and he’s really good at it. But the one downside of this is that I am living in that state of limbo where half of my stuff is gone, seemingly never to be seen again.

When we listed the house he decided that my beautiful Pier One bookcase in our eat-in kitchen area that held all my cookbooks and nice serving platters was taking up too much space. So all of that stuff got packed and sent to the basement for storage, along with the bookcase. Trouble is, when I had my Watkins Open House Brunch, I had to go back down to the basement and unpack all of my serving platters so I could use them again.

I hate living in limbo.

Then this morning, J decided to fix some minor things around the house like a trim board that came loose and caulk in our shower. Because the shower needed to be completely dry for the caulking, we both had to shower upstairs.

And guess what? J has already packed our shower curtains!

It was bad enough that we had no curtain to contain the shower overspray, but add to that the fact that our upstairs bathtubs are TEE-TINY and we are both large folks, and our bathrooms were soaked. I couldn’t believe how small our tubs are! It was the first time I’ve ever used one of them personally, and I felt like the Jolly Green Giant in that thing. I measured it, and the inside is only seventeen inches deep! I don’t know about yall, but squeezing my XXL body into 17″ clearance is not easy. It’s actually probably a good thing there wasn’t a shower curtain, or it would have been stuck to the entire left side of my body the whole time anyway.

It’s fine for G as a one year old, but when he’s a teenager that would be a major issue.

Note to self: Our next house will have a nice large shower in the guest room for future grown-up Garrett and any normal sized people who might happen to visit our home and want to have adequate space to cleanse their normal sized parts.