Day two was sunny and warm and breezy- perfect pool weather! Check out the pool at the hotel. I stole this photo from another website, because I didn’t take too many pictures of the pool while we were there. I was too busy fending off the wildlife. But we’ll get to that in a minute.

This pool was HUGE! 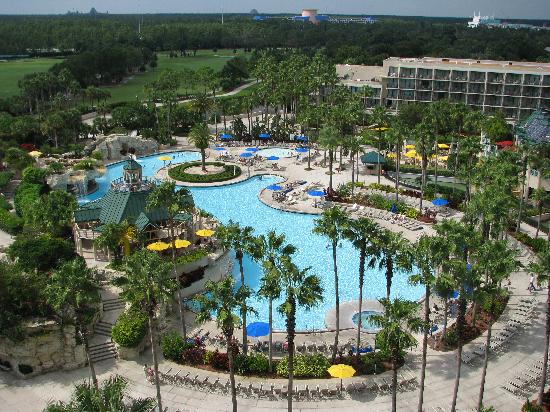 Garrett and I ate a quick bite of breakfast, slathered down in sunscreen and headed down with our blow-up duck to take full advantage of the aquatic recreation the hotel had to offer. 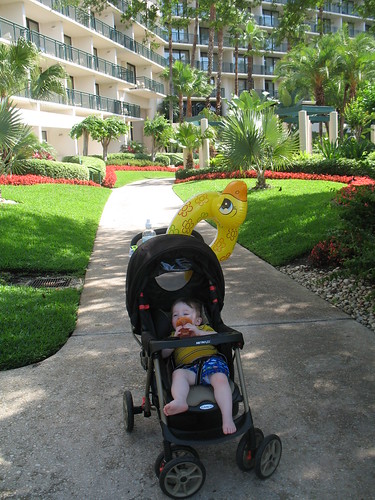 We swam for about an hour, most of which was spent trying to stay behind the waterfalls and avoid the blazing Florida sun. Finally I decided to get G’s fair haired self out of the heat of the day and into some real shade. 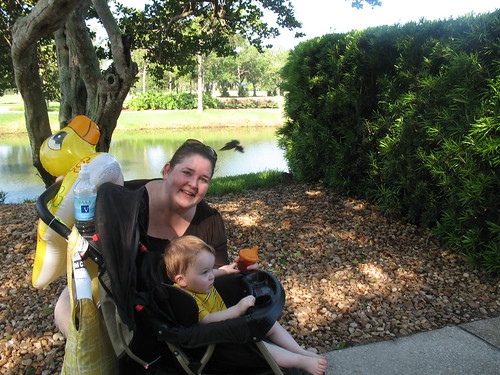 We took a stroll around the property and saw a cute little bunny rabbit by the lake overlooking the golf course. This little guy was the first of many not-so-wild animals that we encountered on our trip. 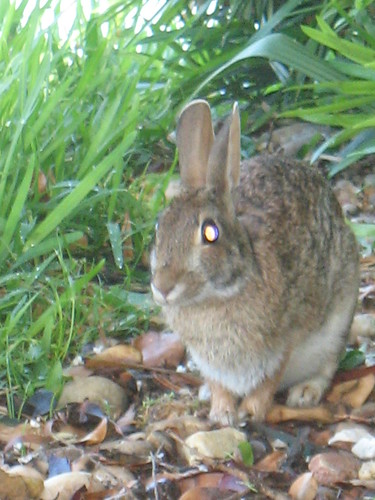 The hotel grounds were just beautiful, like a tropical paradise. It wasn’t very crowded so we got to explore it in peace while G zoned out. Can you tell that it was very close to nap time in this pic? 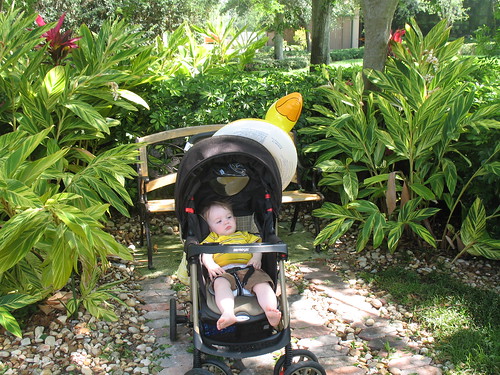 After naptime we had the afternoon to kill, so I decided to head over to Downtown Disney and do some shopping that afternoon. 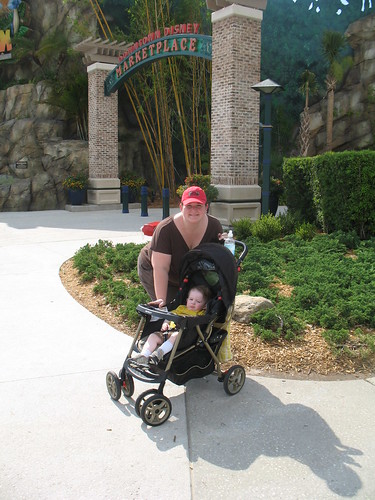 We wandered through the shops and bought some souveniers. G was not too excited about me posing him in front of all these touristy things, but I did it anyway. 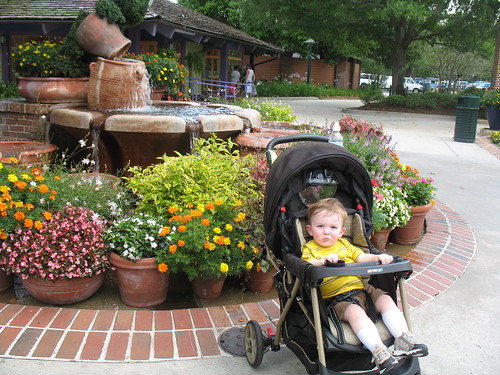 Can’t you just hear him saying, “Will you stop it, Mom?” UGH! You are embarrassing me!” 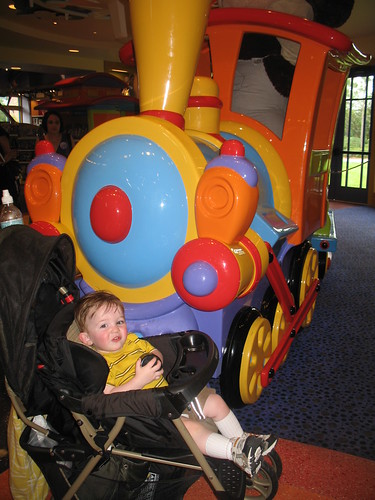 Here he is pouting in front of the giant tinkertoy. 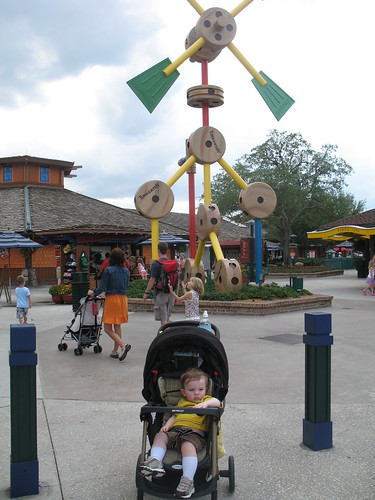 Then he got to ride his very first carousel! Do you know how hard it is to get a good photo of a kid going up and down on a carousel while trying to hold him on the horse with the other hand?

Here was the first attempt. FAIL. 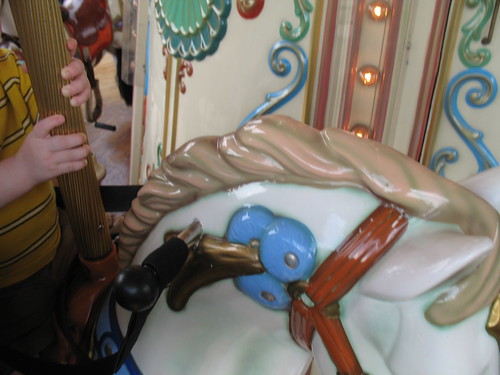 But this pic came out great, I thought! 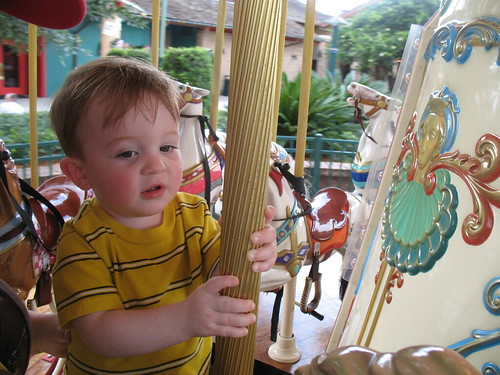 After a few hours of walking around and shopping, we were both spent. We grabbed some dinner and took it back to the room for another night of Golden Girls, shoulder sleeping and fireworks.

The next day, we headed back out to swim at the pool some more. That pool was really great for entertaining a bored 15 month old who doesn’t like to be stuck in a hotel room all day. 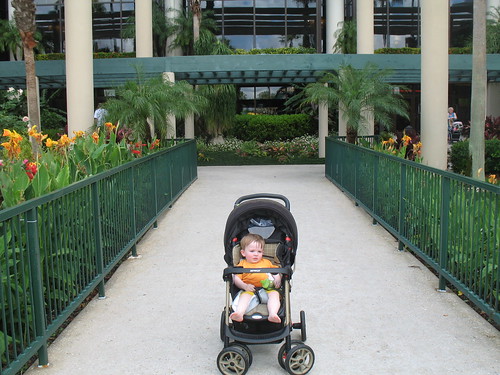 We had some unexpected action at the pool this day, however.

I bought an apple bran and a blueberry muffin at Starbucks for our breakfast that morning. I decided that a little alfresco dining sounded nice, so I strolled Garrett out to the pool and we shared bites of the apple bran muffin. I had the blueberry muffin sitting on the pool chair right next to me.

As I was getting Garrett ready to go in the pool, this deranged squirrel came up and snatched my muffin!! Right out from under my nose! I couldn’t believe it! I went and got it back from him just to see if I could get it on videotape and sure enough, he came back for more.

Hope you enjoyed my blueberry goodness, you hairy little thief.

My apologies for my twangy Redneck voice that you are about to hear in this video. What can I say? Alabama. Southern born and Southern bred.

After we lost half our breakfast and swam for a while, G and I headed over to the arcade and the kid’s activity center for some indoor fun during the heat of the day.

Here he is waiting on Dad to bring some dry pants that Mom forgot to pack in the pool bag. Whoops. 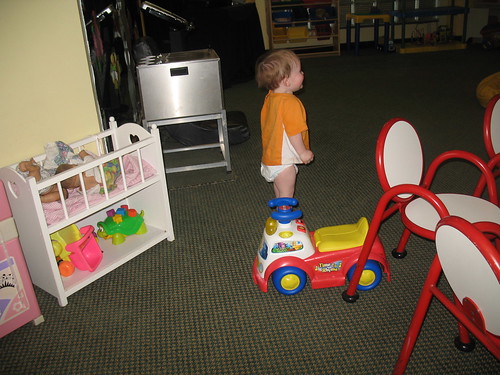 He LOVED the arcade. He went buck wild, and I didn’t even need to spend a dime. He just liked watching all the lights and sirens flash on the games. No money required. 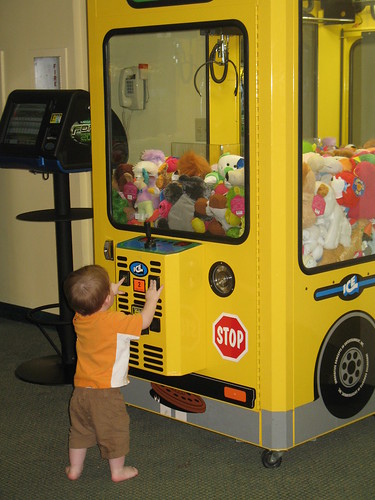 He rocked out to Guitar Hero. 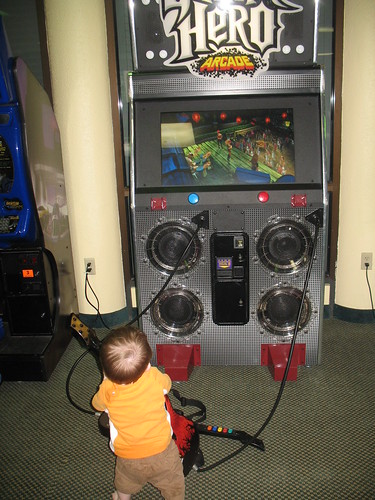 Then he did some break dancing on the Dance Dance Revolution knock-off game. 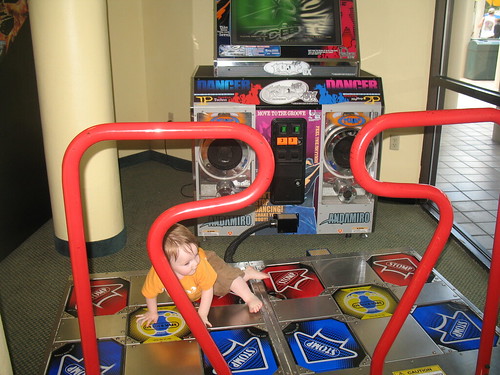 Then he drove the race cars while making vroom vroom noises. I swear boys must be born with that gene to automatically know that a car goes vroom. 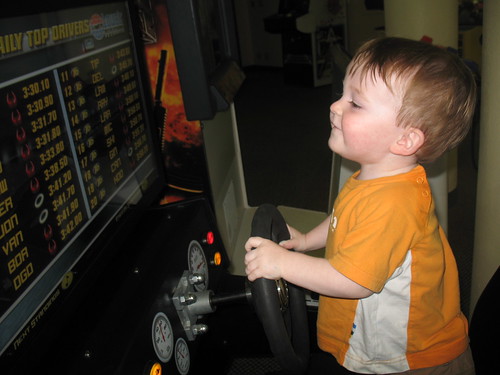 After we wasted the afternoon hours in the arcade, J wrapped up his final sessions in his conference. He was finished with everything work-wise, so we finally got some Daddy time on the trip. We considered going to the Magic Kingdom that afternoon, but we quickly changed our mind after looking out the hotel window and seeing this. 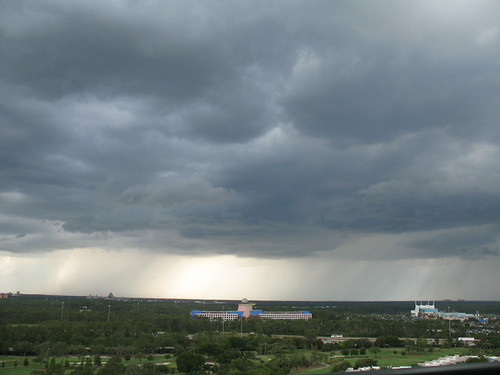 So instead we headed back over to Downtown Disney to find some dinner. Check out the awesome Lego creations- a black lab, German Shepherd, dalmation, bulldog and even an old hound dog! Awesome! 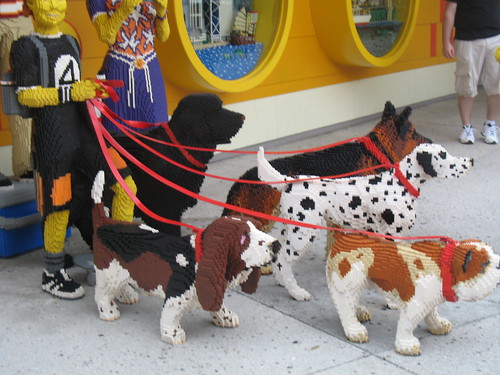 Here is J going “RAWR” in front of the giant Lego T-Rex. 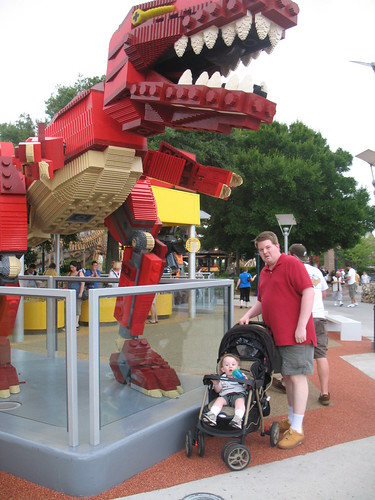 It started to rain on us as we left the Lego store, so we headed to the first available restaurant that didn’t have a mile long wait. That happened to be Fulton’s Crab House, which is located on the big riverboat in the middle of Downtown Disney. Food was pretty good, but MAN was it pricey. Wow.

We were seated next to a family from Wisconsin who had a little girl that was a few months older than G. The two of them spent the entire night having a contest to see who could shake their head “no” the hardest and the longest. It was pretty cute to see them sitting there like this the whole night. I was beginning to worry that G might suffer from Shaken Baby Syndrome from shaking his head at that little girl so much, but it got us through an entire sit down dinner without a meltdown, so I just let him keep shaking. I wish I had gotten it on video, but I thought it was kind of creepy to ask a perfect stranger if I could videotape their two year old daughter to put on the internet. So instead I settled for a pic of me and G with our crayon masterpieces on the table. 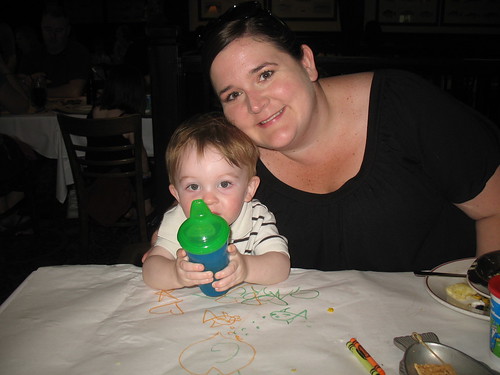 From there we headed home for yet another night of Golden Girls, shoulder sleeping, and a beautiful Epcot eclipse as the sun set over Disney. 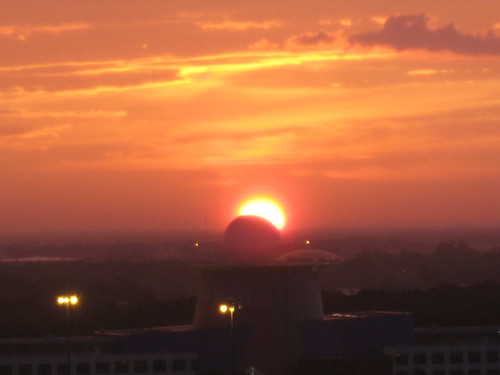 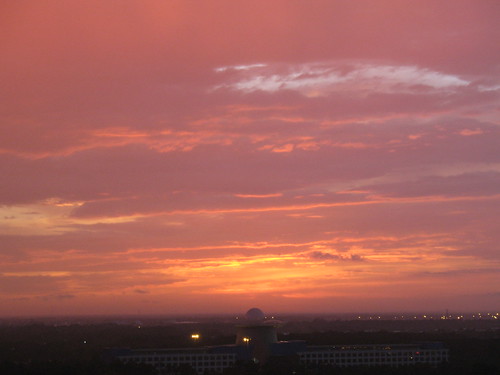