Last week we took an impromptu trip to Disney World with Garrett. I say impromptu because two weeks before we went J got an offer to go to a work conference at the Marriott World Center in Orlando, which happens to be one mile from Disney World. I debated whether it was worth contracting the swine flu to take Garrett down for his very first trip to Disney. We haven’t had a real family vacation together at all, so this was a nice opportunity to venture out in the world with Garrett. After an informal Facebook poll of my friends that resulted in an overwhelming “YES! GO!” I decided to attempt it.

Garrett had never flown on an airplane before, so we had no idea what to expect from him on the plane.

We let him run around the Birmingham Airport for a while to burn off some energy while we waited at our gate. The BHM is never all that crowded, so this was a good place for him to get all his wiggles out before we boarded the flight.

“Who me? Wiggly? Surely you jest, Mother.” 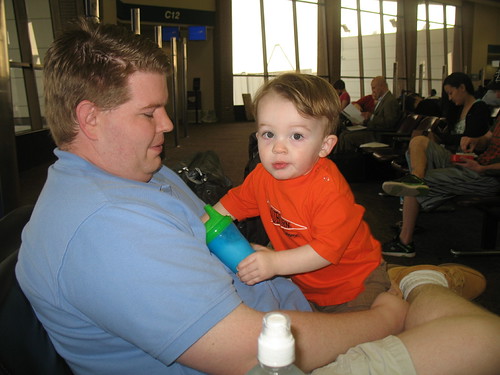 He did exceptionally well on the flight. No trouble with ears or pressure or anything, which I admit had me worried. 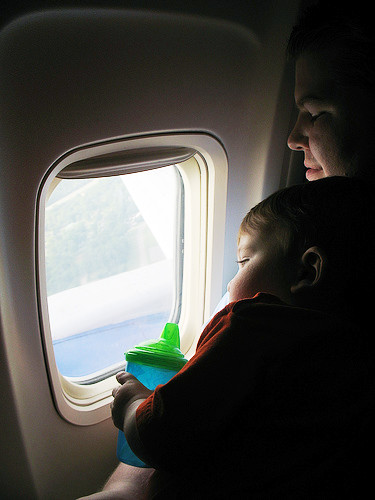 The lifesaver of the trip was the portable DVD player and the Wiggles and Thomas the Tank Engine DVD that we borrowed from Nana. This got us through about an hour of the flight. 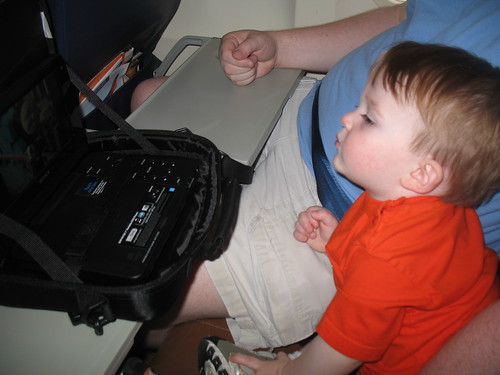 And right when the stewardess said, “Welcome to Orlando.” G fell fast asleep. What kind of timing is that? He only got about 10 minutes of rest while we taxied to the gate and then we were up and at ’em. 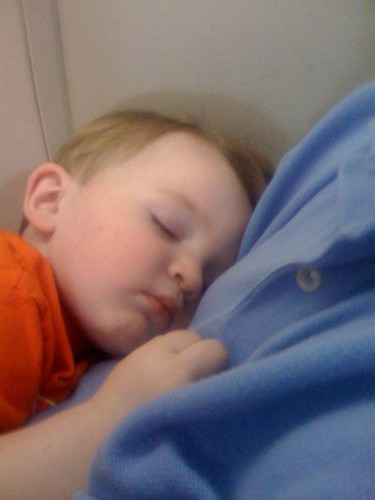 We rented a car at the airport so we would have a car seat to get us to the hotel. The car we got was a Ford Focus, which made me feel like the Jolly Green Giant. My head was literally touching the roof of the car as I was driving. And y’all don’t even want to know how my 6’2″ husband felt about riding around in that car. We are way too spoiled by the roominess of our giant gas guzzlers, I guess.

G was perfectly cool in the backseat though.

Just chillin’ in the Graco. 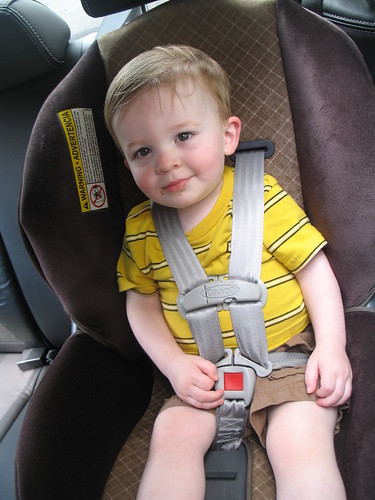 The car got us around town just fine, though. We even stopped at a grocery store for some breakfast foods and snacks to keep in the room for G. The grocery store turned out to be kind of scary in a not-so good neighborhood. But it was comforting to know that if someone tried to carjack me and put me in the trunk (on the off chance that I would actually FIT inside the trunk) there was this handy little lever inside that I could snatch open and high-tail it out of there like this little stick man. 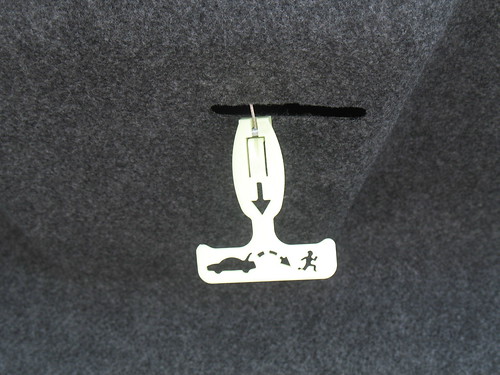 We arrived at our hotel and discovered that our room was on the 18th floor of the North tower, with a fantastic view of the entire Disney World property. 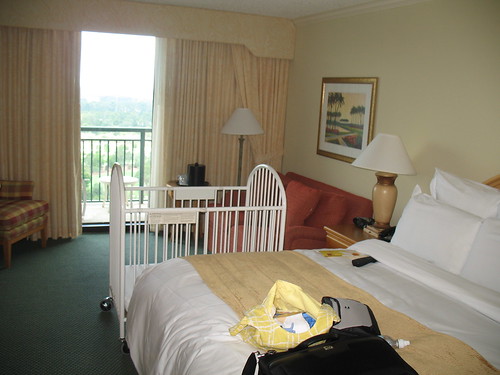 That meant we got to watch the fireworks at Epcot and Magic Kingdom every night and the gorgeous sunsets every afternoon. 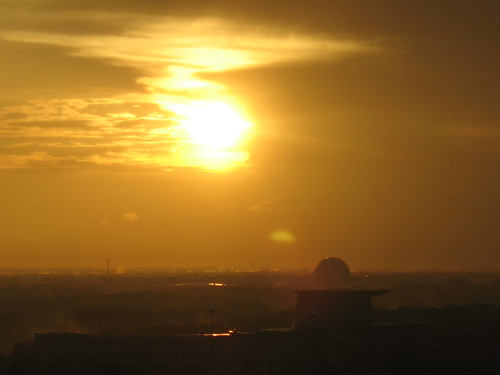 It also meant we got to watch the WICKED storm clouds roll in from many many miles away, then hit our hotel with a vengeance each afternoon at around 5:00 pm. Here was the terrible hail storm that happened the day we arrived. The pounding rain, lightning and thunder that accompanied this storm was kinda scary. 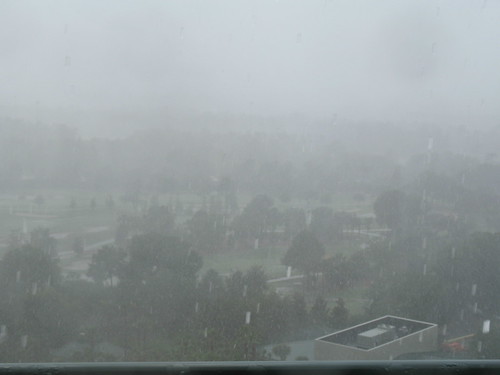 J had to attend a Welcome Reception on the first night, so Garrett and I were on our own from the time we arrived until two days into the trip.

We decided to go exploring the hotel and get the lay of the land on the first night. The lobby was huge with a beautiful glass atrium that leaked during the hailstorm. There were garbage cans, rugs and “Wet Floor” signs everywhere. 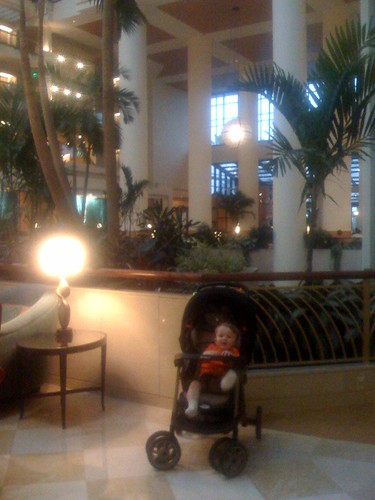 We had dinner together at the Solaris restaurant inside the hotel. G did so well at dinner, and I was so proud of him for being a nice little gentleman during the meal. 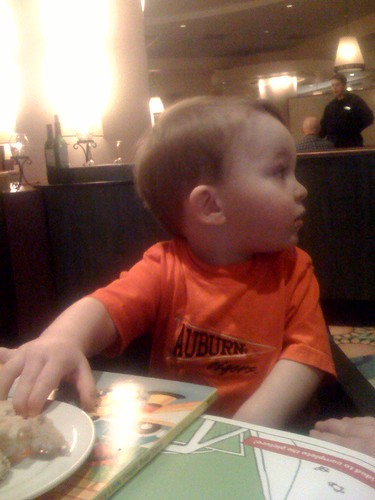 On the way back to the room, Garrett really wanted to push all those shiny buttons on the elevators. 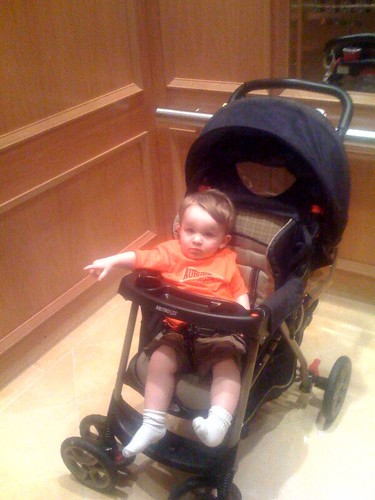 We got back to the room that night and tried to keep his bedtime routine as normal as possible. He was so keyed up from the excitement of the day that the routine didn’t help him fall asleep. So I turned out all the lights in the hotel room and held him in my lap while we watched an episode of Golden Girls. (Ang and Nat- Since I know yall will ask–it was the episode where Blanche meets the man at the library and doesn’t realize he’s in a wheelchair.)

I put him to bed, and sat in the dark waiting on J to get back to the room. He arrived just in time to watch the fireworks at Disney. Check out our view! 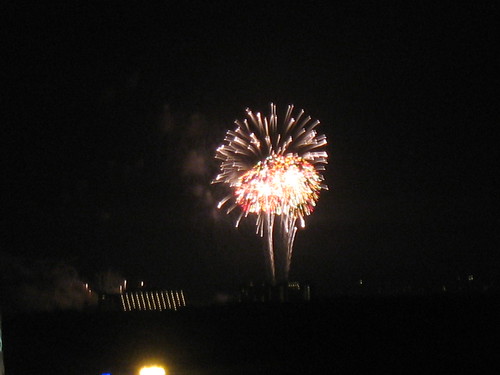 We were so tired that we fell asleep soon after, and Day one ended.