I’ve been scared to write this blog entry since December for fear of jinxing myself.

But now that we’re a few months over the hump I feel ok about tentatively putting it out there that Garrett has officially moved back to his bedroom and is sleeping in his big boy bed! When we first moved into our house in May of last year this is what his bedroom looked like: 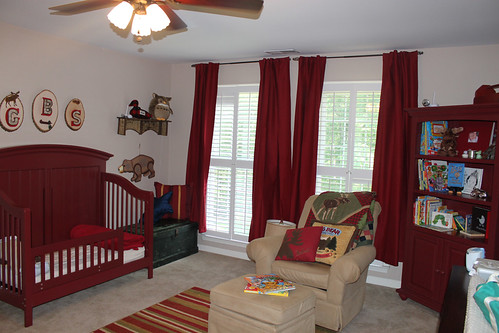 And before you even ask– yes, those curtains are STILL highwaters. I have the fabric to sew onto the bottom of them but I haven’t gotten around to it yet. One day…

We converted his crib to a toddler bed the day that we moved in, so he had a pretty big transition during that time. He stayed in his room for about two months and then he started having tremendously scary nightmares and night terrors. You see that stuffed owl in the corner on the shelf? Yeah, turns out that owl is the root of all evil. I think I’ve scarred my kid for life with that sucker. Backstory–there is a Thomas episode where Max and Monty are driving through the woods and a scary owl hoots in the distance. Combine scary owl cartoon + stuffed owl + REAL owl that lives in the woods by us + overactive two year old imagination and we had a full on hysterical owl emergency one night. He heard the real owl hoot outside and freaked the eff out.

“THAT SCARY OWL IS GONNA GET ME MAMA!!”

Since his room is upstairs and ours is on the main level of the house, I was scared that he would fall down the steps, or worse, go over the balcony in the middle of the night. So we put a babyproof doorknob on the inside of his room. This just made things worse, because then during one particular night terror he tried to rip the door off of the hinges like Captain Insane-O. There were nights I would wake up with my feet hitting the floor running up to his room because his screams were so crazy scary.

It just wasn’t worth it.

One night I got fed up with the near nightly heart attacks and running up the stairs to check on him. That night J brought his crib mattress downstairs and stuck it in the corner of our bedroom so we could all get some sleep. And once that happened, he didn’t leave our bedroom for about six months. We’ve never co-slept with Garrett because we’re not big fans of taking kicks to the kidneys and groin while we sleep. Plus, he’s been a pretty good independent sleeper for the most part. But the new house and room really threw him for a loop. The mattress on the floor in our bedroom seemed to be the logical solution until one night I woke up to him coughing quietly. I ran over to his pallet on the floor to see his head had gotten wedged between the mattress and a big pillow that was beside him on the floor and he was struggling to breathe! Now THAT scared the ever-loving crap outta me! So that next morning we drove to Target and bought a small toddler bed. From there on out we were stuck with a toddler bed in the corner of our bedroom, which was a blessing and a curse. We all slept a little bit easier, but the strict 8:00 pm bath, book, prayers, bedtime routine that we had followed since he was a year old flew right out the window. Not to mention the fact that a little boy was in our room every.single.night for nearly half a year. :blink Talk about zero privacy.

One day in December J found a full size Simmons Beautyrest mattress on sale at Macy’s for a ridiculously low price. He emailed me to ask if we should get it for G and I agreed. It was delivered a few weeks later, and we made a HUGE production about introducing it to Garrett as his new big boy bed.

From there on out, he has slept in it every single night.

Without further ado… I introduce to you, my hero, the Big Boy Bed! 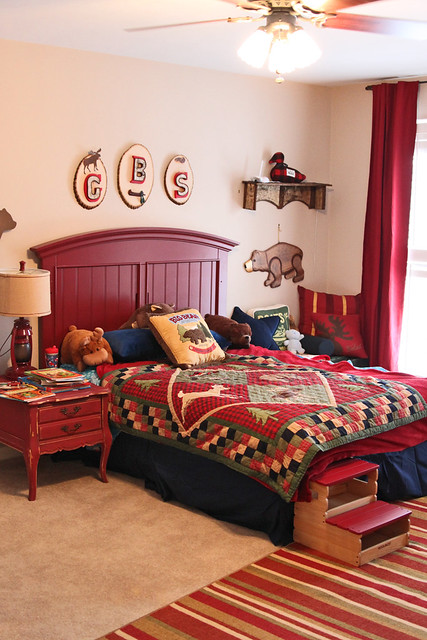 This has been The Best Decision of 2011. Garrett loves his bed. J and I especially love his bed. We are back in our old strict 8:00 pm routine of bath, book, prayers, bed. Life is much better because of this bed. 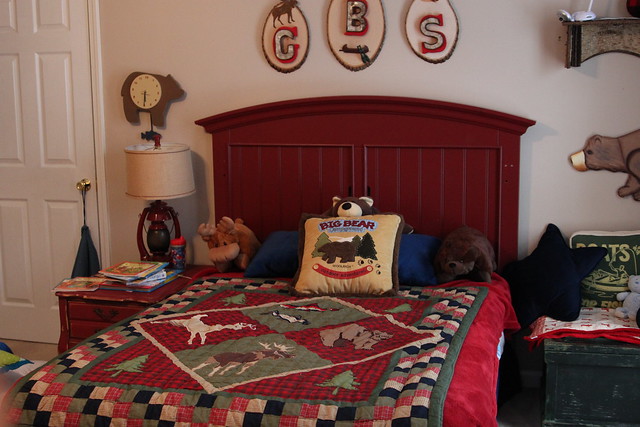 If only we had thought of it sooner.

« An Ode to Krispy Kreme
When skies are gray do I really want my wall color to be, too? »

« An Ode to Krispy Kreme • When skies are gray do I really want my wall color to be, too? »