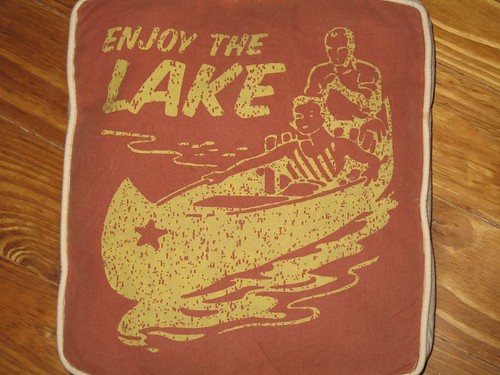 We spent Memorial Day weekend at the lake in the same cabin we rented last year. I love the cabin because
a.) it’s on my favorite lake in the state of Alabama
b.) it’s got a great front porch where I can sit in a rocking chair and listen to music all night while watching the ripples on the water and
c.) it’s got this rockin’ Kohler sink that I’m seriously considering stealing one day. 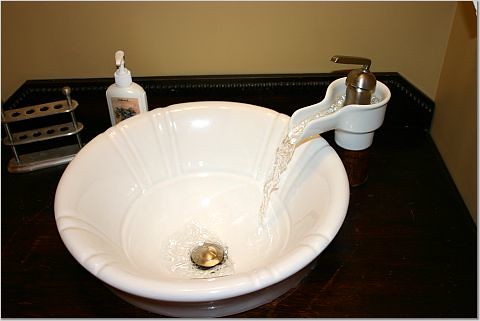 See? Told y’all it was rockin’!

Last year J tried to take the canoe out for a spin and this is how well that went: 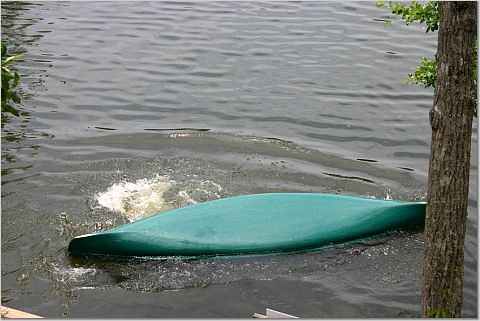 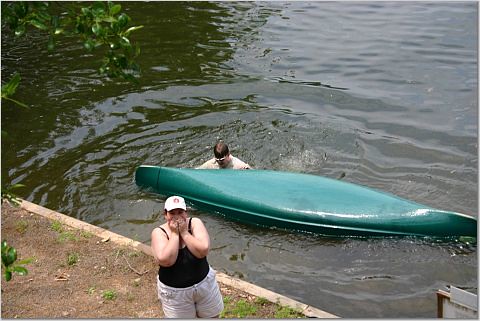 Lori and Anthony came down with sweet baby Cutler on Saturday to hang out with us. We grilled Baby Back ribs on a charcoal grill that seriously might have contributed to global warming. If you hear about some polar ice caps melting this week it’s because of this grill. 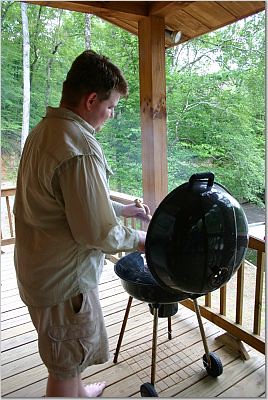 9000 degrees this grill was, I tell you. Thankfully J and Lori did all the grilling. Then Lori fell off the steps backwards but somehow managed to land on her feet, still holding the BBQ tongs. And there was not even a funnel in site. It was pretty damn funny.

We floated on some rafts and got solicited by drunk 15 year old girls across the slough to borrow my Sea Biscuit inner tube. I told them no, I mean, the nerve? Then they asked how much it cost if they were gonna buy one. I told them $150 and they hightailed it back across the water to their pier. Later in the trip my inner tube had a nice “V” shaped hole in the side of it and all the air leaked out. I honestly don’t know if it got caught on something and ripped, or if the little drunk girls came back for their revenge later on that night. Either way, it’s nothing a patch can’t handle. I tried to keep the sunscreen in full use but I still got a little sunburn on my shoulders. Today it’s fine. Got some nice tan lines.

Lori and I took a boat ride and nearly took out not one but two jet skis. Punk ass teenage jet ski riders make me want to scream. Errr. They don’t watch where they are going, and come flying right in front of the boat, forcing me to back off the throttle to keep from smacking into them. If the rider in the back fell off, I would literally run over them. It’s happened before where the rider fell off right in front of me and I nearly crapped my pants. UGH I mean what is the deal? When there is a huge lake surrounding us, why the heck do you have to ride like 10 feet away from my boat and then cut me off???? Geez. I’m starting to sound like my grandpa, but it’s just amazing to me how stupid kids can be sometimes.

So anyway… we really did enjoy the lake! Aside from the jetski’s it’s very relaxing and peaceful, even if it was 900 degrees outside (350 in the flowerbed). We gave up trying to fish on Sunday and went to Petals from the Past and the Jemison Trade Center to pass some time. I got three gallon containers of French Lavender and some bridal veil at PftP. Love that place!!

Hope everyone had a great holiday weekend! Holler at me and tell me what you did!