Ok, so per my good buddy Dawn’s request, here are more “before” pictures of the cabin. Hopefully the “afters” will be more Betherized (do ya like how I just made that word up?) and colorful.  Let me give you some background info on this cabin.  Half of it (the kitchen, bathroom and one bedroom) was originally one of those old Airstream silver bullet trailers from the 1950’s.  It was probably at one time very similar to this: 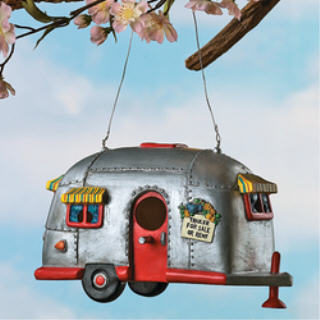 Which, by the way, this is the coolest little birdhouse I have ever seen, and if you ever want to send me a cabinwarming gift, this would totally be IT! The little sign says, “Trailer for Sale or Rent” which is ALL ME. Hehehe.

So sometime between 1950 and today, someone parked the trailer on this lot, and built an addition around it, adding a large living room and another bedroom.  They also put on some nice vinyl siding and a tin roof, for which I am very thankful.

This is the living room. All the fine furnishings and fixtures are to remain. The green corduroy sectional sofa is rockin’, huh? You’ll be blown away by the table in front of it – the entire top lifts up to tabletop height so you can sit on the couch and shovel food directly into your mouth with minimal effort. A brilliant contraption. The futon, well, is a futon. Painful and ugly. The valances have already been snatched off the windows in this room. And next on the agenda for this room is PAINT. I’ll probably go with something warm. Any kind of color is better than Navajo White.

Another shot of the living room and into the eat in kitchen. We’ll discuss those pink cabinets in a minute. The gangly legged coffee table had it’s fate sealed when we went shopping at the Trade Days this past weekend. We bought an old weathered green chest to put in it’s place. Don’t ask me why there are random boards nailed to the ceiling. They could be the only thing holding the roof up, I really don’t know. We’ve decided not to touch them. See that big cased opening? Well the dimension of that opening is exactly 6 feet tall. The dimension of my husband is exactly 6 feet 2 inches tall. Yeah, he’s already smacked his head once. He’s suggested I put a picture of a Mallard above the door to remind him to “DUCK!”.

Ahhh the eat in kitchen. I’m actually thinking of letting the valances remain in this room because the fabric matches the seats of the chairs. Someone must have gotten a steal of a deal on that fabric from the $1/yard bin at Walmart. The fabric is very outdoorsy, with little fishing tackle and rods and reels and trout baskets all jumbled together so it goes with the whole rustic theme. The table and chairs is incredibly sturdy, which is a must for the giants who are now occupying the little lilyputian cabin. (Ceiling height of this room, six feet, 3 inches so J has this much head clearance.

Ahhh the pink pepto cabinets. Where shall I begin?  This weekend I was inspired by the Solo cups sitting on the counter , and have decided to paint those cabinets deep dark red color with crackle and distressing so the pink can still show through. Wish me luck.  The stove works, the fridge works, even the original vent fan still works!!  And that is a huge deal, considering this camper was probably built circa 1954.

Here we have the lovely master bedroom. Bathing suits not included. The bed may look like something straight out of the psych hospital, but hiding underneath that fuzzy peach blanket is a quite comfy brand new Sealy Posturpedic to snuggle up in all night. Again, valances have already been removed. I’m planning to paint this room a nice shade of sagey green.

Bedroom Number Two. Not much to say about this room. It’s tiny. It has a rounded ceiling because it is in the back of the old silver bullet trailer that they built the cabin around. Ok, moving on…

The itty bitty teeny tiny really small bathroom. The best thing I can say about this room is AT LEAST WE HAVE INDOOR PLUMBING. And yes, those are mirrored tiles behind the tub. And behind those is some funkadelic ’60’s wallpaper that will rock your world. I don’t plan on spending much time in this tub.  The water from the faucet is pumped directly from the lake, so it’s not potable.  Which reminds me, I need to buy a water cooler for the kitchen.  But as for bathing, I would rather just take my Pantene down to the boat and lather up out in the middle of the lake.  At least it’s a clean lake.  No PCB’s in sight.   :o)

And that concludes our tour of the inside.  The outside pics will come later.

« Waited all winter for the time to be right just to take you along… Baby, get ready.
Aboot last week… »

« Waited all winter for the time to be right just to take you along… Baby, get ready. • Aboot last week… »