I am just now settling back into my life after this whirlwind I’ve been on the past week. We left a week ago for Vancouver, with an uneventful flight connecting in Dallas Fort Worth. We did see a special sight at DFW – there was a large group of soldiers returning from Iraq that drew a 10 minute standing ovation from the people waiting in the terminal. It brought tears to my eyes watching those men and women in uniform waving and beaming with happiness to be home again. Very heartwarming. 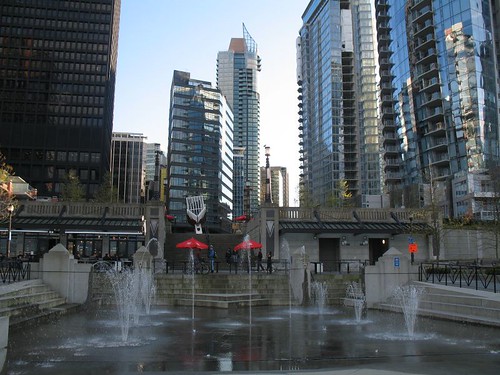 Once in Vancouver the weather was foggy and around 5 degrees Celcius. I finally learned how to convert celcius to farenheit on this trip. Take the celcius number and double it, then add 30 and you’ve got an approximate farenheit temp. So 5 degrees Celcius = somewhere around 40 degrees. I also became somewhat familiar with converting kilometers to miles and the Canadian dollar to US. It helped once I converted over to Canadian dollars, though. I didn’t feel like I was throwing my money away. 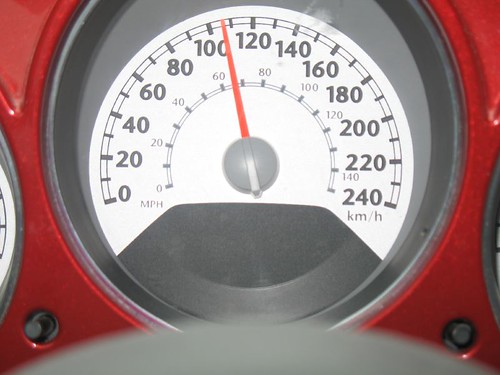 When we got our rental car, and they said they were all out of mid-size cars, so would we like to upgrade to a convertible? I said, “Sure!” so off we zoomed in our little red PT Cruiser convertible. It took some getting used to driving, but once I learned the blind spots we were rolling. 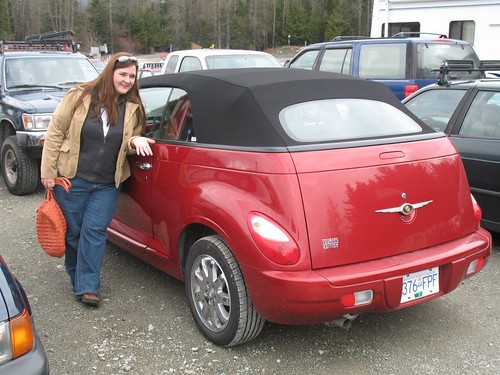 Our first stop was Granville Island, a CUTE little market right on the water before you got into the downtown core of Vancouver. 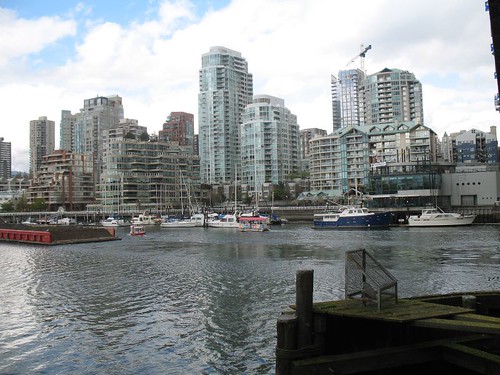 I bought a few souvenirs here, mainly for me. One was a napkin holder in the shape of an old vintage camper to go into the lake house. :o) They had a farmers market type place that had fresh cheese and meats and breads and candy and fruits and veggies. 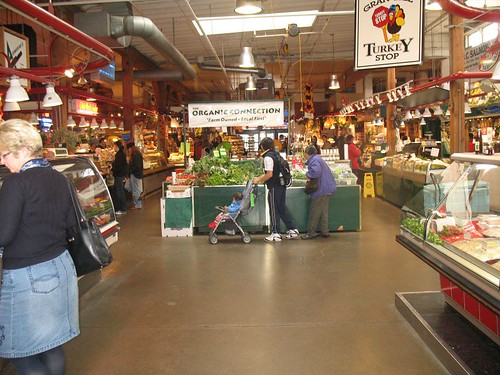 It blew me away. I was so jealous wishing there was someplace in Birmingham like it. We bought some bread and cheese and fruit to take to our hotel for snacks, then we headed to the Marriot Pinnacle Downtown to get checked into our room. It was a super nice hotel right in the middle of the business district. The city itself was beautiful, but I spent most of my drive trying to avoid hitting the pedestrians and bicyclists that were crowding the sidewalks. Not something this rural Alabama girl was used to, so I tried to keep my eyes peeled at all times. During the entire trip I only sideswiped one bicycler – no, just kidding. I came damn close to it, though. Nothing like getting the heart racing like slamming on the brakes with a bicycler eye to eye and inches from your bumper.

The hotel was beautiful, and we ate dinner that night at the restaurant on the premises. The chef must have been Thai, or at least obsessed with Thai food, because the menu featured lots of curry. I had a dish called Butter Chicken that was incredible. It was like chicken chili served over coconut jasmine rice with a side of golden raisin salsa and some kind of flatbread. Too bad I couldn’t eat it all, because it was so good.

The next morning our body clocks were still set to Central time so we were awake by 4:00 am Vancouver time. We decided to make the four hour round trip up to Whistler before J had to be back and check in for his seminar at 1:00. We set out on the Sea to Sky highway, crossing the Lions Gate Bridge and up into the Canadian Rockies. The air was clear and crisp, except for the occasional smell of burning brakes from the log trucks trying to slow down going down the mountains. The highway is under construction in preparation for the 2010 Olympics, so it was slow going most of the way up. 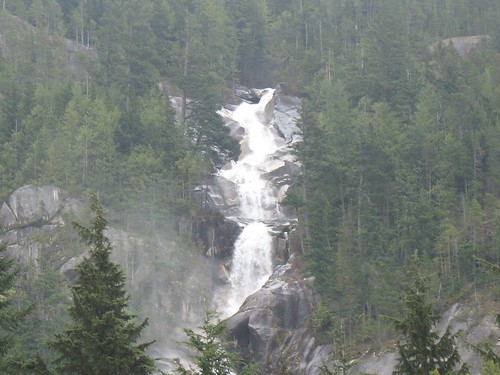 Once in Whistler we only had about an hour and a half to see the sights before heading back, so we walked around the village and sipped a Starbucks. 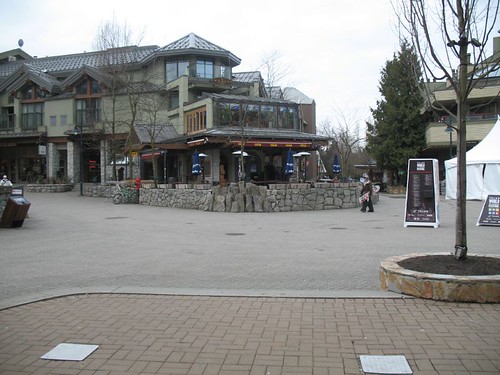 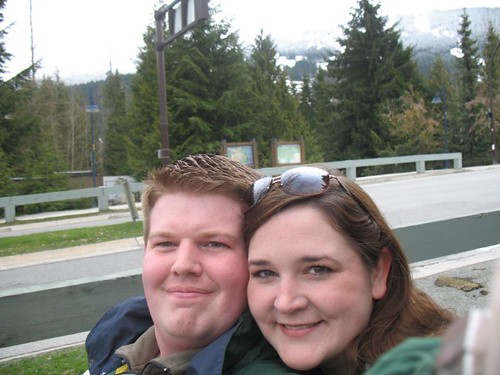 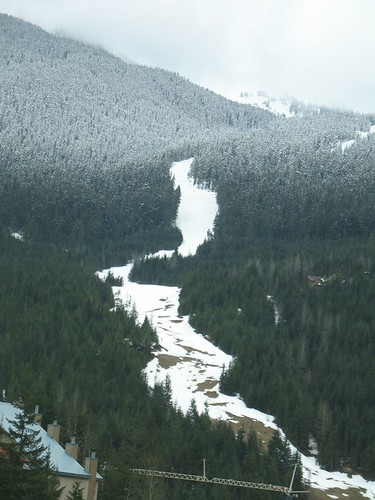 Bought some more souvenirs, the funniest being a clay plaque with a buck nekkid couple holding a fishing pole and a stringer of fish. They were even pot-bellied like us! She just needs some brown hair and it would be us! I thought it was perfect for the lake cabin bathroom, so I snatched it up. 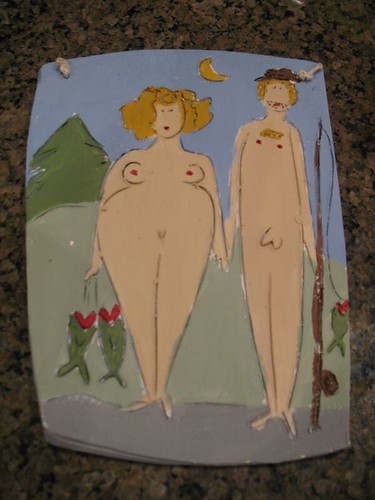 I also snapped some pics and ogled the snowboarders changing clothes at the tailgate of their cars. They were having the Telus World Ski and Snowboarding Festival while we were there, so lots of college kids around. It looked like Spring Break in the snow. It was such a beautiful place – and unlike any I’ve ever seen before. 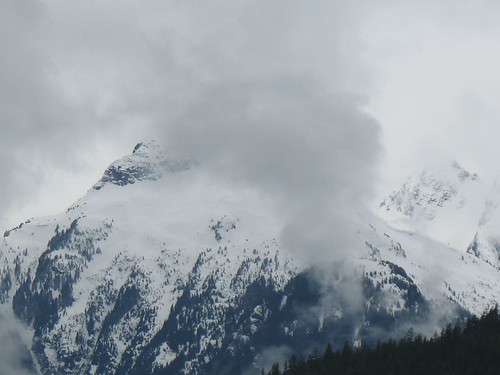 They had 14 inches of new snowfall the weekend before we arrived, and it was like a Winter Wonderland in April. I said I wanted to see snow J got checked into his conference, and I was free to see the sights on my own. I drove to Stanley Park, and walked around looking at all the cherry blossoms and totem poles and downed trees from the winter windstorms. There is lots of cleanup to be done, but it was still a magnificent park with a great view of the city. I visited Prospect Point and the Vancouver Aquarium. 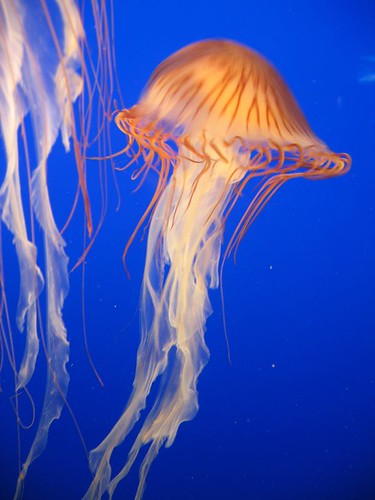 It was a good way to spend the afternoon. I walked around Stanley Park and enjoyed all the trees and clean air. The air in Vancouver is different than Alabama air. I can’t describe it. Maybe it’s the humidity or cooler temperature or absence of so much pollution, but it just felt good to breathe it in. That night we ate dinner at Joe Fortes Seafood and Chophouse. All I can say is – YUM. Cedar Plank Salmon was just incredible. Afterwards we walked around Robson Street and window shopped. 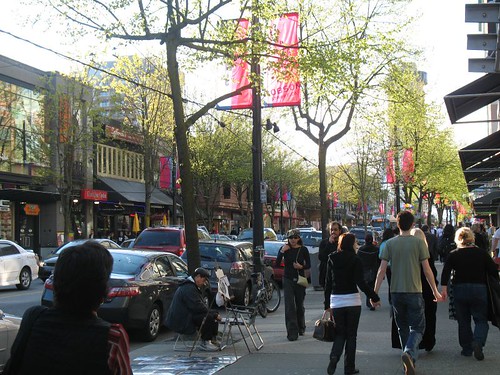 We wandered back toward the hotel and stopped off at a little park along the water. I love the way the city is right on the water. That night I had to make a decision about how to spend the next day – my last- in the city. I opted to take the Grey Line tour over to Victoria and tour Butchart Gardens and see the Titanic exhibit at the Royal BC Museum.

I’m so glad I did. The next morning, the tour bus drove us to the Ferry terminal, where, guess what?? I bought more souvenirs! Canadian Christmas ornaments all around! You’re quite welcome, citizens of Vancouver, for the temporary boost in your economy while I was a visitor.

I took a 90 minute ferry ride through the Gulf Islands to Victoria. It was such a scenic ride, and it made me want to take an Alaskan cruise. I’m such a blue-hair trapped in a 30 year old body. Oh well.. whatever makes me happy, right? The ferry itself kind of freaked me out. While I was up top I was fine, but then once they called everyone back to their cars all I can think about is Grey’s Anatomy and how if the boat goes down I’ll be blue like Meredith floating inside the bus in the belly of the boat. But, thankfully, that didn’t happen, so away we went into the countryside of Victoria.

All I could think about while driving through the farmland in Victoria was, “This looks like home!” The rolling plowed fields and houses and even the cars looked like any given backroad in Alabama. That all changed when we arrived at Butchart Gardens, because there ain’t NOWHERE near that purdy here in little ole Bama. 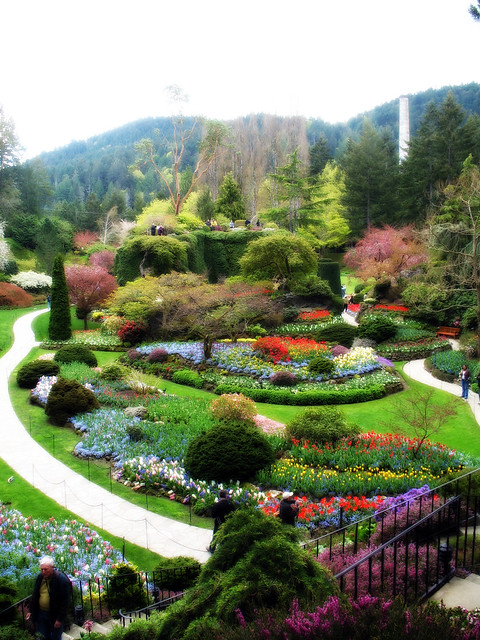 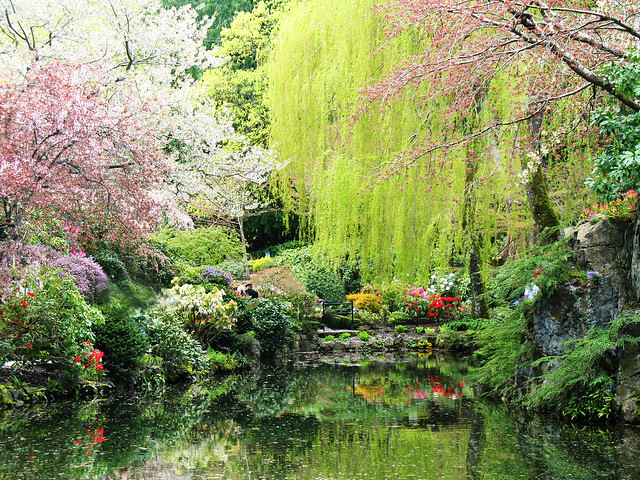 This place is like the Garden of Eden. Stunningly beautiful. 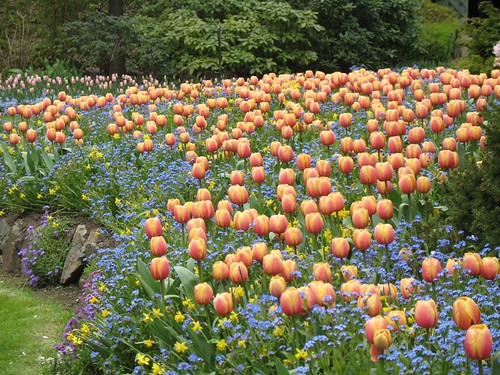 I can’t describe the gardens. There aren’t enough words. The pictures will have to do even though they don’t do it the justice it deserves. If only you could see it in Smellivision so you could experience the flower fragrances, you would understand just how magnificent this place is. I was blown away, and I only had an hour and a half to hurry through the gardens. I was sad to leave, and hope to go back one day and see the Rose Garden in full bloom. 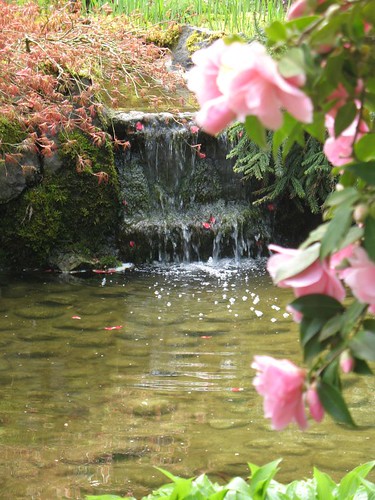 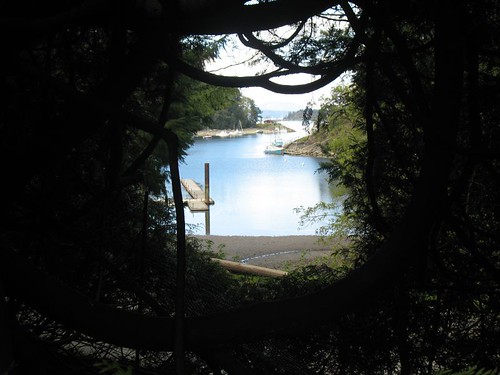 I took a bazillion pictures at Butchart. So many that I am dedicating an entire post to the gardens of Butchart. You’ll have to click over if you want to see more! 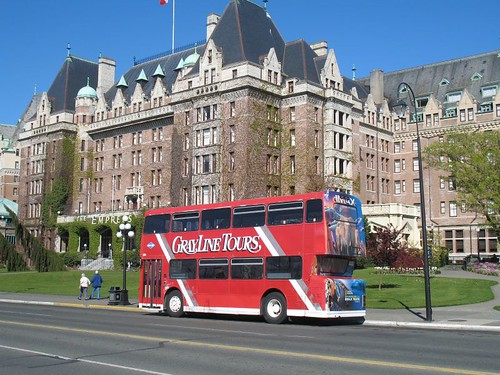 From there we traveled to downtown Victoria and parked in front of the Empress Hotel. It was another beautiful city right on the water, with lots of huge cherry trees in full bloom. 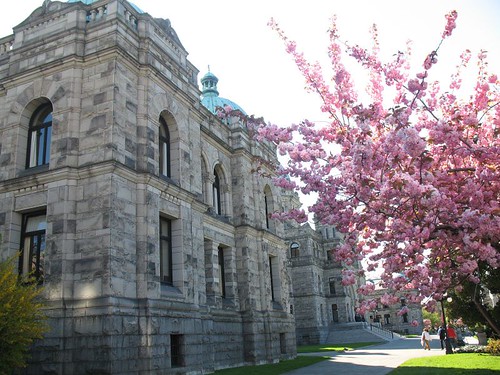 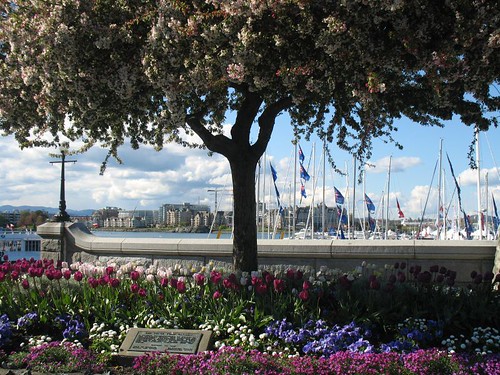 I toured the Titanic exhibit with a nice Australian couple from my tour group. The exhibit is very “Wow” inspiring and you should see it if it ever comes to your town. It gave me chill bumps over and over again, reading the stories of the passengers who lived and died on the voyage. And of course, it gave me yet another thing to worry about on the ferry ride back into Vancouver. hehehe.

That was the last night of my whirlwind tour of Vancouver, and I came home exhausted from all the sightseeing. I’m so grateful to my husband’s company for sending him on a conference where I got to tag along and see a place that I’ve never visited before. I thoroughly enjoyed my trip to British Columbia. The people were some of the friendliest I’ve every encountered in my limited travels of the world. My husband said it was like the South of the North. I would go back there in a heartbeat. Everyone who lives near this beautiful place should feel truly blessed to be in such a unique city and surroundings. I was jealous of the food, the scenery, the clean air, the nice neighbors and the atmosphere all around Vancouver. 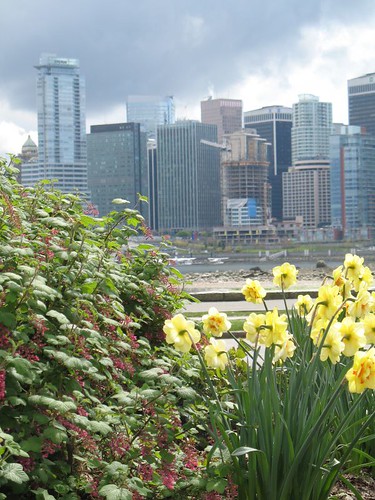 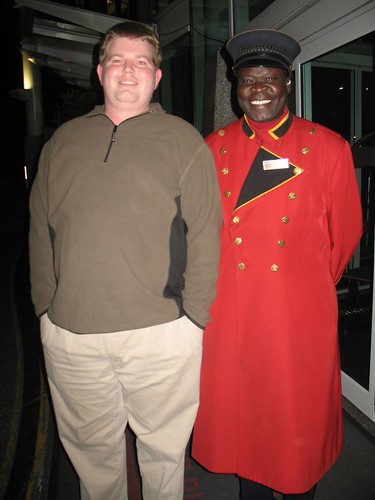 Thanks for the memories.

« The Grand Tour
If you have Ophidiophobia, do not read this entry. »

« The Grand Tour • If you have Ophidiophobia, do not read this entry. »