On Friday, August 1st Garrett turned 6 months old, the same day my Grandpa in Kentucky turned 90 years old! How my tiny sleepy newborn has grown into a squirmy, giggling and rolling baby in the blink of an eye is just beyond me. He hates lying flat on his back since he has mastered sitting up on his own. 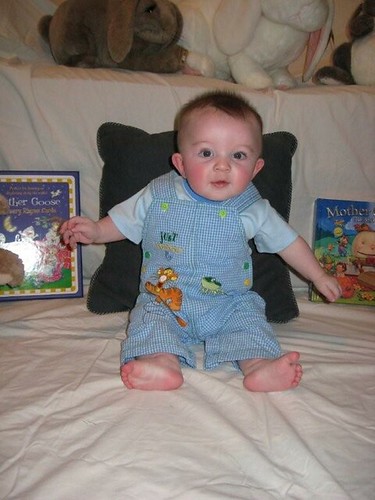 If he is on his back he is constantly doing crunches in an effort to sit up and see the world. Maybe he is training for the baby Olympics? 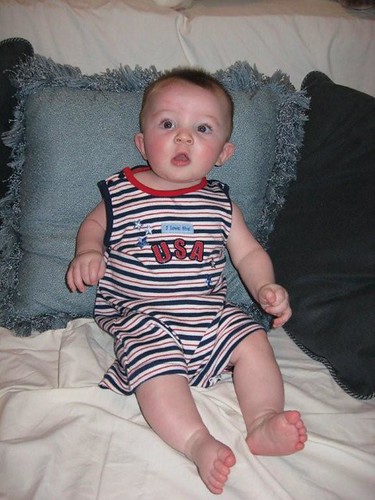 I am sure that we could win a gold medal in the Longest Drool Stretching competition. 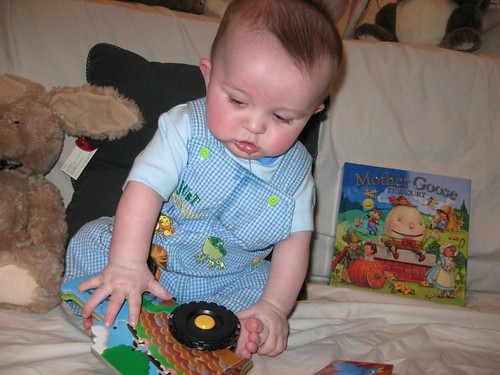 Possible a silver or bronze in the Rocking Horse Riding events. 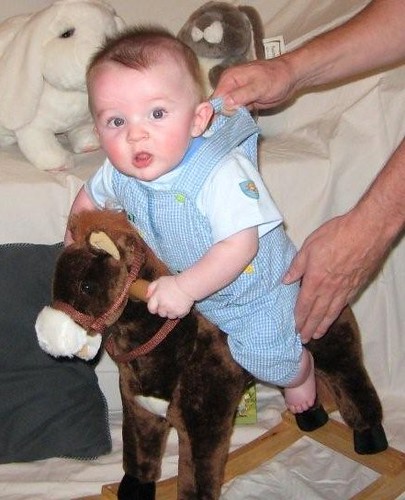 Then after he wins all these Olympic medals I’m thinking of starting a Baby Workout DVD series called “Sweatin’ to the Huggies”. The DVD will also include some time in the Johnny Jump Up so start reinforcing your doorframes if you plan to follow along. 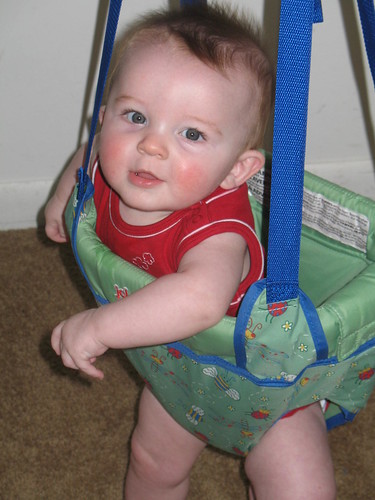 It’s a workout for me just trying to diaper and dress my little 20 lb alligator who rolls and twists and kicks and scratches. It’s exhausting. But pretty much everything we do is exhausting these days, and it’s only going to get worse once he starts crawling and walking. I dread babyproofing my house, but it’s got to be done sooner or later.

We have had big changes since our last update, so many that I’m not even sure I can remember them all. One of the biggest accomplishments is successfully unswaddling him at night. One morning when we were still swaddling I woke up to muffled screams, and found him face down in his crib unable to flip back over because his arms were bound up. That night we went cold turkey on the swaddle, and haven’t looked back. Unfortunately, that resulted in a long month of frequent screams in the night, since he wakes himself up at all hours to examine all of his newly unswaddled digits in the dark. He is teaching himself to crawl at 4 am, I think. I watch on the video monitor as he scoots and rolls to all four corners of the crib. We finally put up his bumpers to try to keep him from bonking his big noggin all the time. It’s also harder to get him to go to sleep these days, without the Miracle Blanket working it’s miracle magic on him at bedtime. He will fall dead asleep on one of us as we feed him his nightly bottle, but the second we lay him down in his crib he starts rubbing his eyes, then he is wide awake again, grinning and happy and ready to play some more. Some nights it takes an hour of rocking, feeding, singing, and praying to get him to finally go to sleep, only to have him wake up again an hour later and we start all over.

Another big event this past month was my niece’s preschool graduation. Congrats Cousin R!! 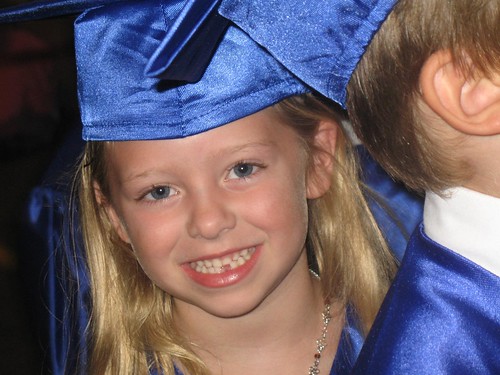 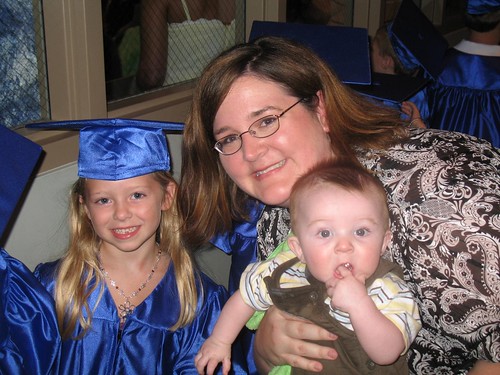 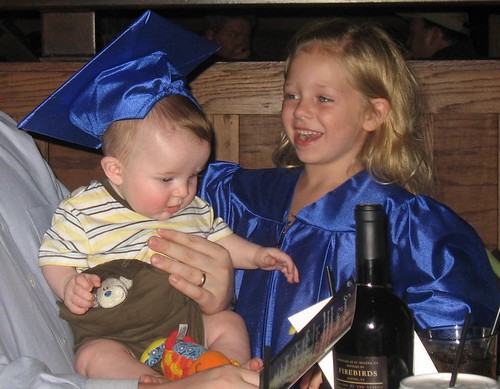 We are so very proud of her! She started Kindergarten on Thursday, and is doing great so far! For her graduation the whole family took off work to go watch her graduate. She and Garrett share a pediatrician. He is on the board of directors for Cousin R’s school, so he was there at the graduation. He was alone and hanging out in the hallway since the small auditorium was full of paparazzi parents. I took Garrett out when he started fussing and struck up a conversation with Dr. A. He is a super nice guy. We chatted for a minute, then I noticed they were about to start handing out the diplomas.

As I started to turn around to go back inside Dr. A goes, “Would you like for me to hold Garrett while you go take pictures?” In about .02 milliseconds I was thrusting Garrett into his arms and grinning wildly. I told Garrett he was in the best hands in the entire building! Then I ran inside to watch the program. When I came out I couldn’t find them anywhere, and finally someone pointed out to the lobby where I saw him pacing around the room, bouncing Garrett and trying to keep him from crying. As soon as G saw me he started crying for mom to take him away from this stranger. How thoughtful was that of the good doctor? I love me some Dr. A. 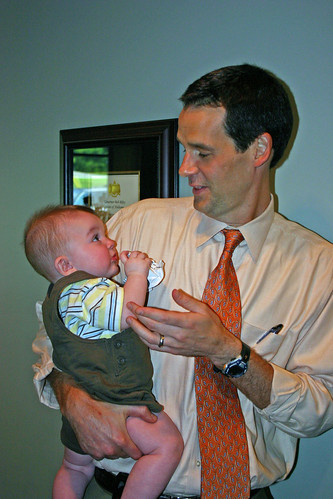 In other news this month, we have moved our offices out of my parent’s basement and into a rental house a few miles down the road. My mom is doing cartwheels of joy to have her house back as a residence only again. She has had an office in her home for over ten years, and it is definitely time for a change. Plus it is SO nice to be able to spread out and have private offices. 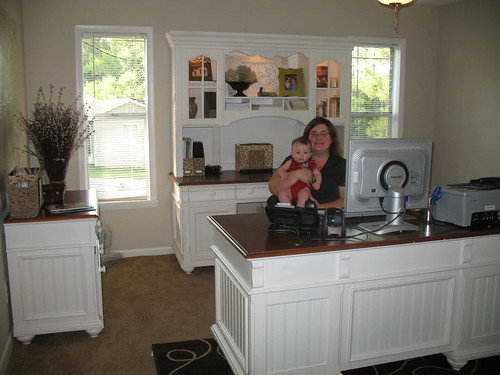 Garrett even has his own playroom right next to my office. We have tried to make it work having him at the office but I finally decided to put him in Mother’s Day Out at a local church three days a week. That leaves us with the other two days to tag team him between my mom, sister and me. I’ve tossed around the idea of hiring a nanny to come in two days and keep him for a few hours. We’ve even interviewed some ladies, so it is a possibility. I’m excited about putting him in a preschool program, especially one at a church. The one that I found comes very highly recommended by lots of friends, and I really think that Garrett will love it. He is so sociable and I think interaction with other people and babies will be really good for him. Entertaining, if nothing else. Let’s hope that I won’t regret turning down that rotavirus vaccine now that I’m putting him a room with a bunch of other drooling, DNA sharing kids.

And speaking of DNA sharing, check out what happened to Granddaddy’s head when he shook G up and flew him like an airplane! Yummy! Good thing the carrots he had just eaten thickened up the spit up a bit so it didn’t run too much. Don’t shake him, Granddaddy, he’ll spew! 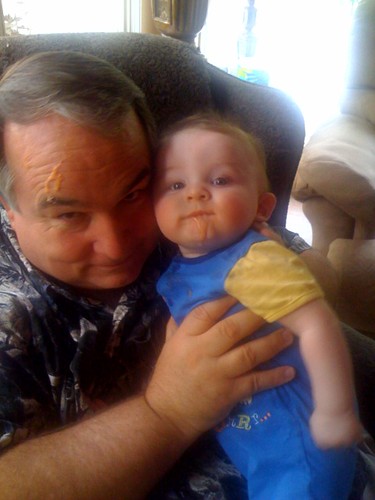 Big news! Next weekend J and I are taking a baby-free road trip down to Biloxi and New Orleans for two nights!! I am going down to my good buddy Natalie’s baby shower then out to dinner with her and her husband Joe in the French Quarter. I absolutely cannot wait. Two whole nights alone! Without being woken up at 3 am by a hungry baby! Sleeping late! Whoohoo!! Grandma and Granddaddy will keep him one night and the next night will be spent at Nana and Papa’s house. I know he will be in good hands all weekend, so I plan to relax and enjoy my vacation.

Although maybe I should worry a little bit. The last time I went to New Orleans this happened: 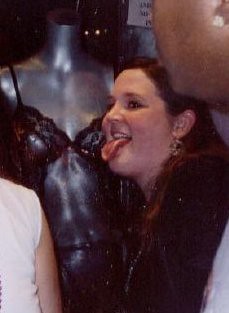 And the last time I left Garrett alone with my sister and neice this happened: 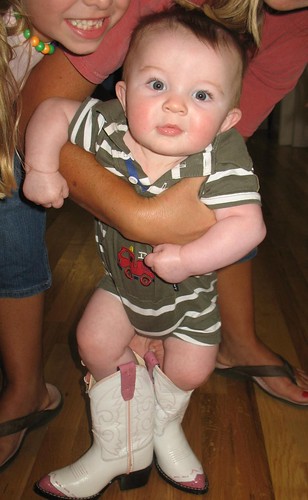 « Finally, adulthood comes to my bedroom.
There’s a fungus among us. »

« Finally, adulthood comes to my bedroom. • There’s a fungus among us. »

Do your kids love Bacon Gouda and Egg sandwiches f

I cannot believe we are already getting close to t

The barber shop is packed full of amazing decor, s

The Moody kitchen was one of my most favorite tran