Michael’s ran a smokin’ hot sale on their Cricut Personal electronic cutters for a Black Friday sale. It was such a good deal that when my friend Lisa told me about it, and I ran across town during the first half of the Iron Bowl to snag one up.

By the way, it’s a great time to shop, if you live in Alabama. Just go to any store during the middle of the Alabama/ Auburn game and you’ll see tumbleweeds blowing by. Whoever thought it was a good idea to plan the Iron Bowl ON Black Friday this year? I have one word to say to them: FAIL. I know the retailers of Alabama were HATING this setup. When I went to Michael’s at 4:00 pm the roads were deserted as were the aisles. But that was all the better for me to get a great deal on the last Cricut in the store! Woot!

Here is what I’ve been practicing on so far: 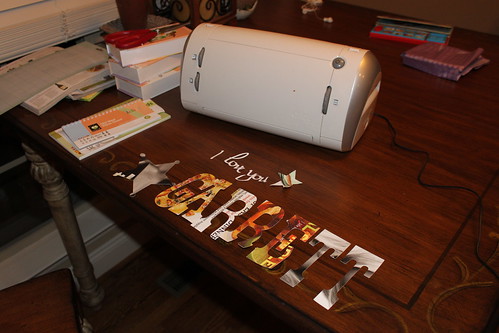 I used the cover of my Real Simple for practice cuts. I’ve also made some frogs and giraffes for Garrett to play with during diaper changes. This thing is awesome! These were made with the Old West cartridge and the Jasmine cartridge says “I love you”.

I’m excited to unleash my scrapbooking mama on this thing and see what she will come up with!

« Hot off the Presses
Low Country »

« Hot off the Presses • Low Country »