When we bought this house I had Clark Griswold-esque visions of our family frolicking in our new pool while singing Mele Kalikimaka and sipping fruity drinks.

Four short weeks into pool ownership and those visions disappeared into a fog so thick you could cut it with a knife. And the summer of my discontent began. We were battling algae and cloudiness so dense we could barely see our feet in the shallow end. See our Polaris robot down there in the deep end? 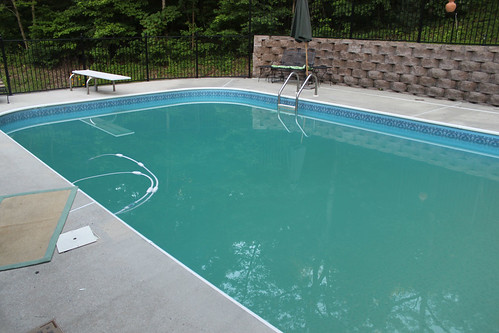 The previous owner of our house used Baquacil as the chemical in the pool. For the first month we really tried to maintain just the right amount of Baqua levels to keep the pool swimmable. Every week J took a sample of water to the local pool store where he would inevitably come home seething mad about the punk ass high school kids who treated him like he was a dummy because he didn’t understand the wide world of pool chemistry. He would also come home with another big batch of chemicals that did nothing but put a huge dent in our bank account.

After some Googling, I discovered that our problems with algae and cloudiness were way beyond our control. Our pool, in effect, had become immune to the Baquacil. No matter how much extra time, effort, money or chemical we poured into it, it just wasn’t gonna clear up.

So, you wanna know what we did about that? Nothing.

We just gave up. We didn’t add a single chemical to the pool for two weeks. I seriously contemplated stocking it with largemouths and floating our pontoon boat in it.

Here is the horrifying result of that slacker move: 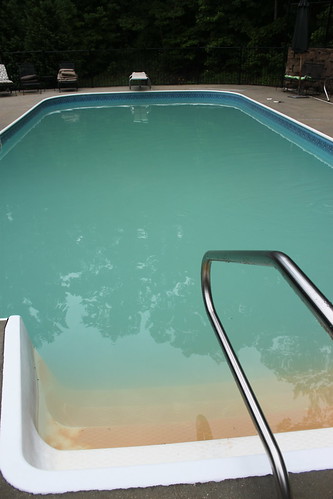 In the midst of all of this our Polaris Robot stopped working. Hell, who would want to work in that nasty environment? I don’t blame him for going on strike. Luckily I have a very handy and mechanically inclined uncle who was able to come over and fix the robot in about 3 minutes flat. So that was awesome! But still we couldn’t see the bottom of the pool. And it was only getting worse by the day.

We called several pool companies who gave us outrageous estimates on what it would cost to clean the pool. I waited over two hours on one guy to show up only to call and have his secretary not even remember our appointment. Apparently the pool at Liberty Park had an emergency that took precedence over my backyard catastrophe. I was not happy with our situation.

That morning something snapped inside me and I knew we had to get it whipped into shape so we could enjoy it for the rest of the summer. I had been reading this website called Trouble Free Pool that was a wealth of information about how to maintain a, well, trouble free pool. Specifically I was interested in the Baquacil to chlorine conversions that people were successfully DIYing with a method called BBB, aka the hillbilly method of keeping a pool clean. You can google it yourself if you want. There are plenty of debates on whether or not it’s a good idea to go this route with a pool. I’m still on the fence myself. We will likely go with a salt water chlorinator next season. But I will say this… it worked like a charm in clearing up my nasty pool so I could use it for the rest of THIS season.

The first thing I did was order myself a super duper test kit so I could know exactly what levels my pool chemistry was reading at any given time. 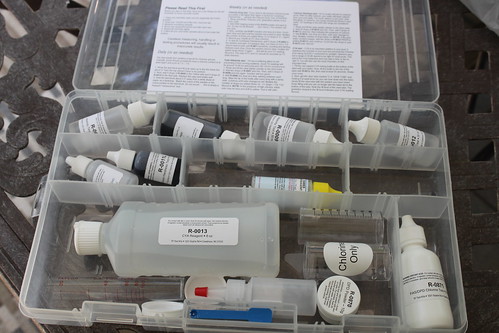 I have become a master backyard chemist, thanks to this website. While we waited on the test kit to arrive, we cleaned out every local Walmart of their 180 gallon jugs of Great Value Bleach.

And the chemical soup began.

Here is what happened to our pool during the 72 hour conversion period:

And here we are today… 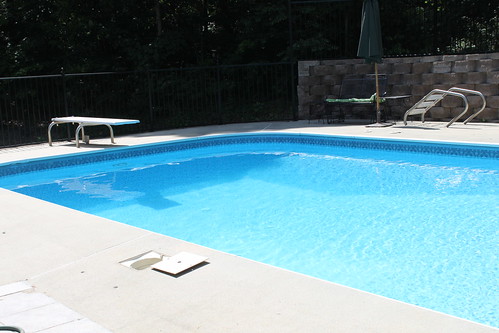 Now this, my friends, is what a pool is SUPPOSED to look like. 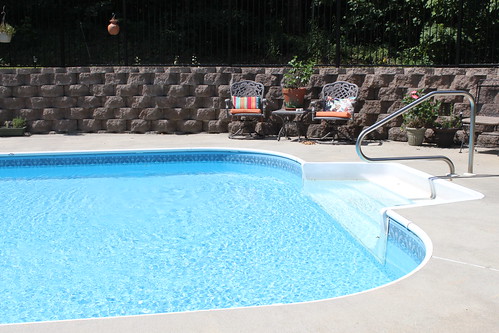 How awesome is that?? We are very very close to our conversion being completed, which means we are very close to seeing Cousin Eddie in his flippy floppies and Cheetah print Speedo giving us a big cheers!

Bring on the rest of the summer!

« Give it away now! A Giving Giveaway.
The real reason Bella didn’t choose Jacob. »

« Give it away now! A Giving Giveaway. • The real reason Bella didn’t choose Jacob. »