Ok, here is the situation.

I’ve been waiting months to post this blog entry. Waiting until I finally found the perfect 9x12ish area rug to act as the beautiful stage to showcase my new barenaked sofa legs. But you know what? Operation Cheap Unique Rug has failed miserable, so I’m in a holding pattern right now on the flooring. Thankfully my inlaws were nice enough to bring over a hand-me-down rug so Garrett doesn’t have to crawl around on the cold hardwood floors while he watches TV and plugs in the hot glue guns. It works well in the interim!

One day a few months back I was looking under the sofa for one of Garrett’s toys, and I discovered that the underside was finished, along with a pair of sexy looking finished legs! I’m not a huge fan of skirted sofas, so the thought popped into my head to remove the skirting, thereby giving it a little more up-to-date look.

The back story on these pieces of furniture–since I am a cheapo, we bought this pair of sofas from the previous owner of our house. I wasn’t going to turn down a pair of dirt cheap Henredon sofas. We got them for a STEAL, so I had no problem taking a pair of scissors and pliers to them to see if I could make my plan come to life.

Here is what they looked like before the project began: 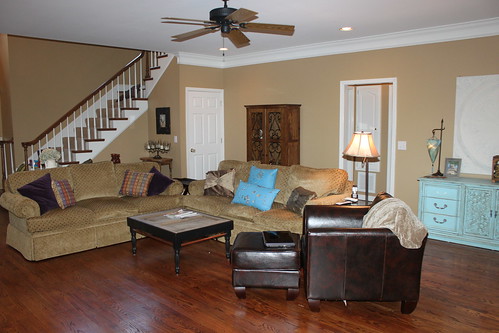 These sofas had more skirts than a sister-wife’s closet. 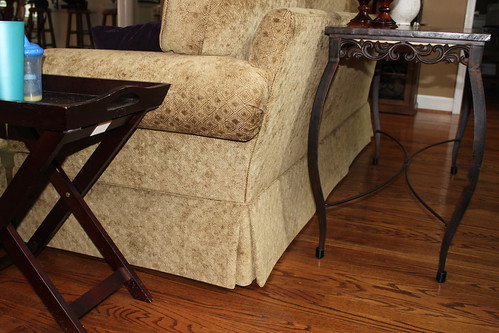 And here is what it looked like during the “during” phase of the project. Also, say hi to my dirty dishes!! 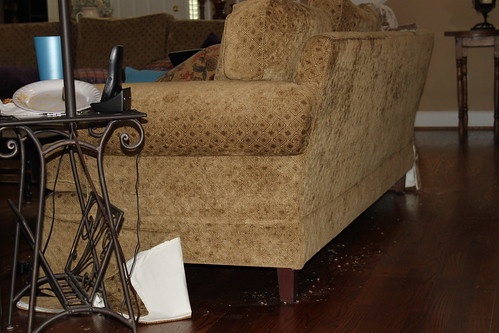 I used the claw end of a hammer along a flat head screwdriver to loosen the staples, then I used a pair of needle nose pliers to pull them out. I also had some scissors on hand to cut away at the skirt as I removed it so it didn’t pile up in the way. Let me say that it took a LOT of effort, arm strength and some serious heavy duty tools to remove that skirting. Those upholstery staples are NO joke. They are about 1″ long and embedded so deep that it took much grunting and straining and eye bulging to remove all of them. And some of them broke off halfway instead of popping out nice and clean like I wanted. Those got hammered back into the wood because there was just no way to remove them all completely.

I worked on removing two sides of the skirt from one sofa, and it took me hours to get it done. My husband sat down with one mighty RIIIIIIPPPP and pretty much finished the job for me on this one. Sometimes I’m envious of men and their biceps. He finished the rest of the de-skirting project when I was away in Minneapolis in July. I came home to two updated sofas showing off their beautiful lean legs. THANK YOU SO MUCH BABE!!! That was a huge job and my arm muscles are thankful that they didn’t have to finish it.

So… without further ado, I present to you the new and improved sofas, minus the skirts and the dirty dishes! 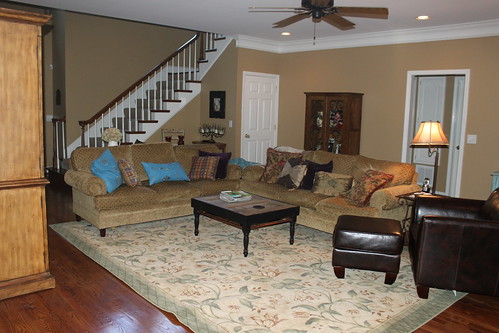 And the back view: 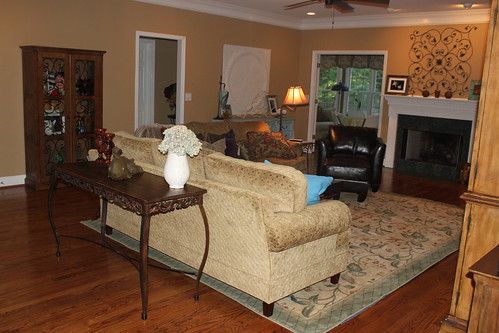 It’s still a work in progress, but I do love the way they turned out! Now if only I could find the right rug to go with them. The search continues…

« Adventures in Yardsales
I spy an over worried mama »

« Adventures in Yardsales • I spy an over worried mama »