Day two of our trip we awoke to this headline in the news: 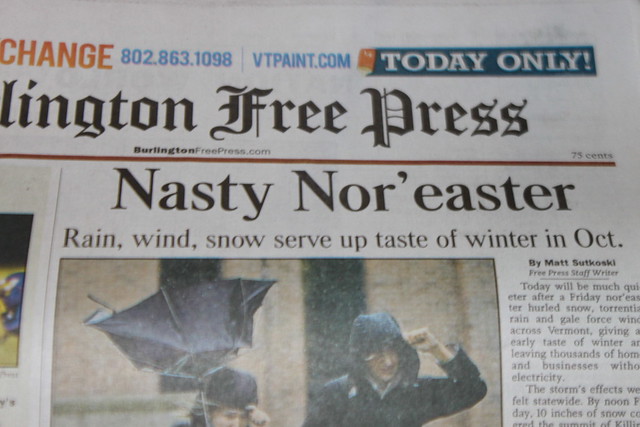 It was still raining and just pretty overall miserable weather. I was in a funk about the weather, so I didn’t take nearly as many photos of this trip as I did the last one. I’m regretting it now, because there was so much cool stuff that we saw that I didn’t take the time to photograph.

Like the spun sugar candy on top of our breakfast french toast. The looked something like this: 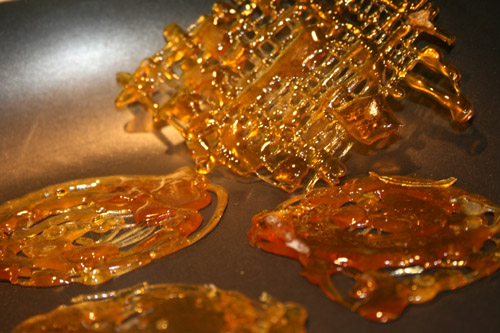 That prompted me to tell Jeremy the story of when I was about eight years old and wanted to be Laura Ingalls Wilder for a living. I was re-reading Little House In The Big Woods for about the twentieth time when I decided that I wanted to make maple syrup snow candy like Laura and Mary had made in the book. 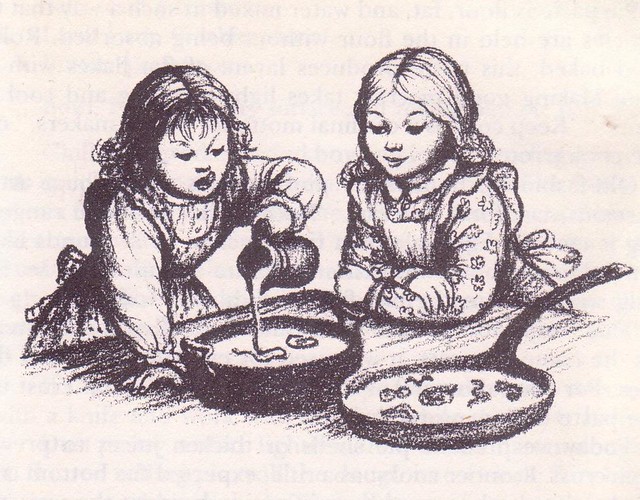 So I went to the kitchen and got one of our orange Tupperware plates, put ice cubes all over it, then proceeded to pour Mrs. Buttersworth all over the top.

Yeah, that didn’t quite turn out the way I was hoping. 🙂

Ok, back to the trip at hand. We left the Rabbit Hill Inn and headed over to the Cabot cheese factory tour. It was a very short drive from the B&B, and it was the one thing I missed on my last trip to Vermont that I wanted to see. 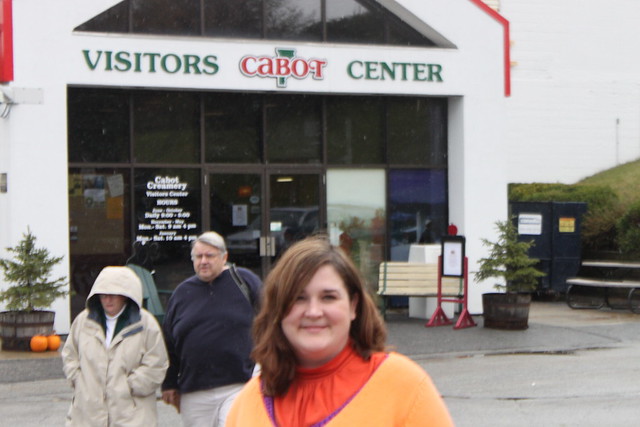 We got to watch the curds and whey slosh around on the factory line and learn about the local farmer co-op that produces all the cheese. 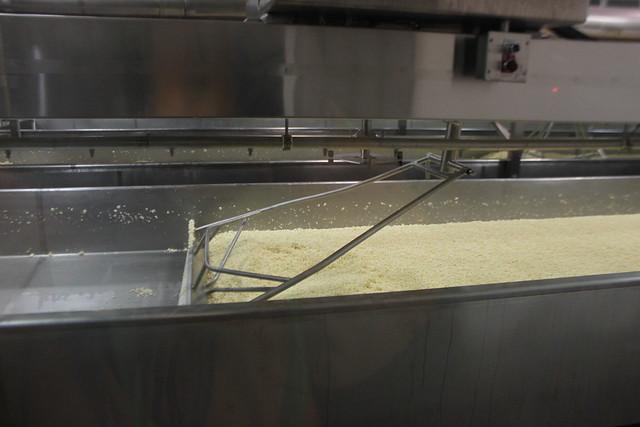 I also learned that Cabot cheddar cheese is naturally lactose free, which was surprising to me. Another thing I learned was that the orange color is added just for looks. I’m a dummy who had no idea about this, so it was good to find that out. 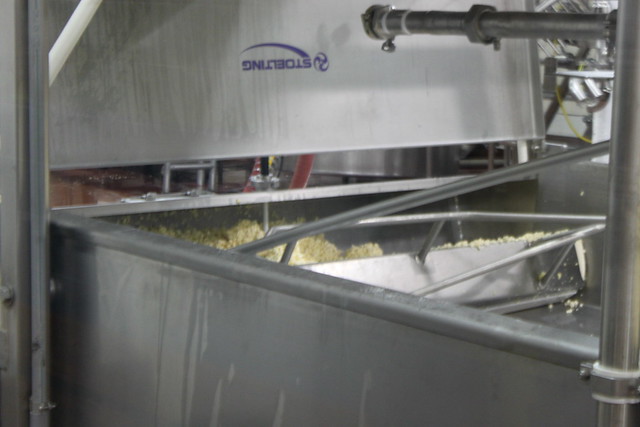 The Cabot cheese farmers will be happy to know that after this trip I’ve purchased my first block of Cabot cheese from my local grocery store, and now we’re pretty addicted to it. I’ve probably bought about six blocks since October. I even bought a new Pampered Chef cheese grater just so we can grate our own fresh cheese instead of the orange kind from the bag! You won’t believe the taste difference from the bagged kind. Highly recommend it!

The next stop on our dairy sampling extravaganza was the Ben and Jerry Factory Tour. We finally saw some more fall color while we were there! Yay for less stick trees! 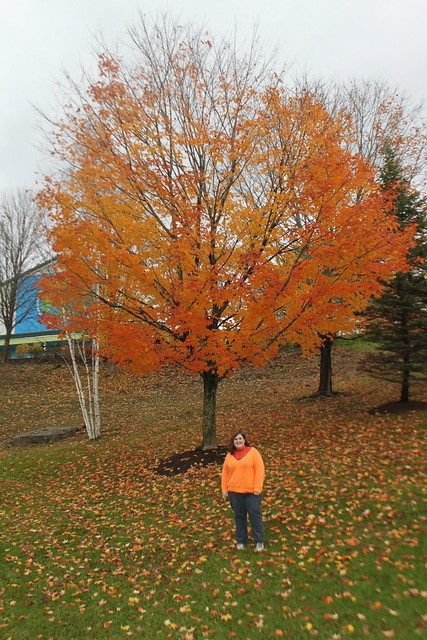 I really should have asked someone to take a picture of us together at this place. the problem with having a dSLR camera is that people are scared to use it, so you don’t hand it off as readily as you do a regular digital camera. And if you do usually it results in a blurry picture because it’s hard to explain how to focus it. So we wind up with a lot of photos like this: 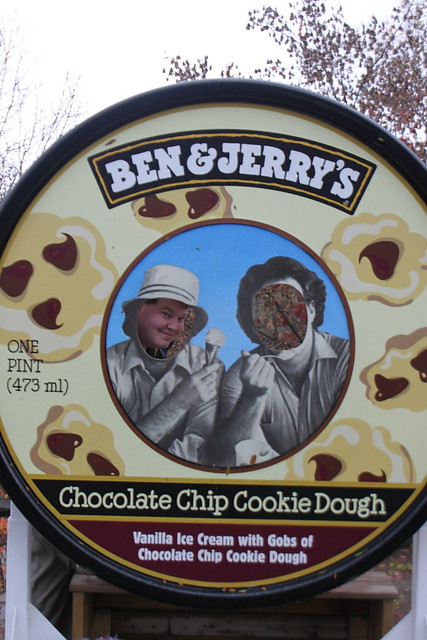 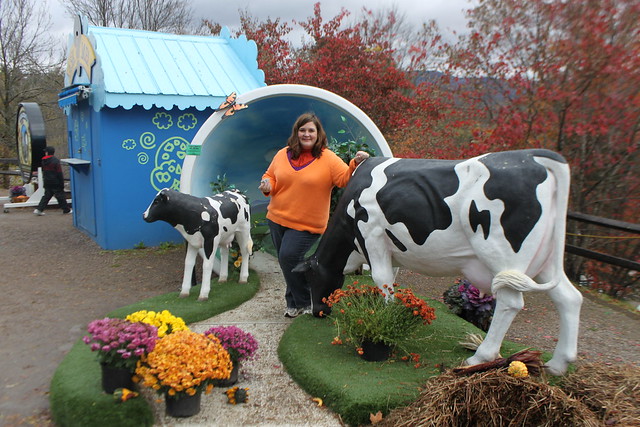 Until finally we did the self portrait head shot so we could both be in the picture together. 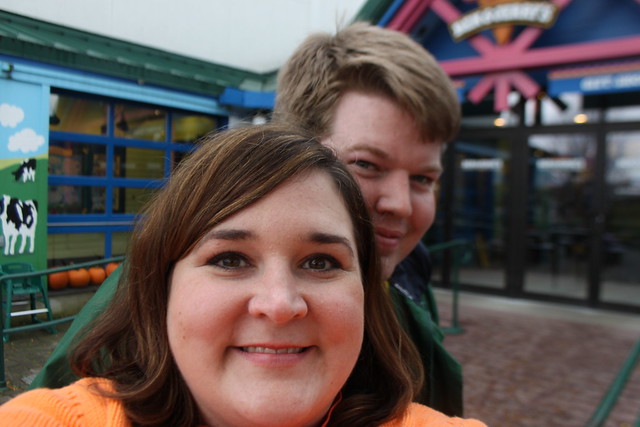 After the B&J tour we moved on up the road to the Cold Hollow Cider Mill where we saw the bees and ate our cider donuts under the gazebo. 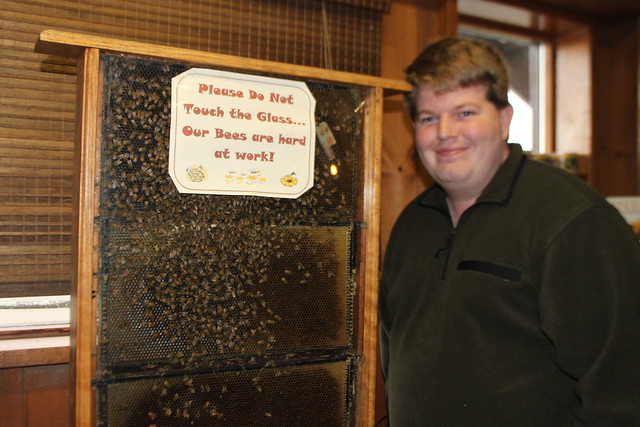 We tried to drive up to Smuggler’s Notch but the road was closed for the snow. Snow in October, can you believe that? 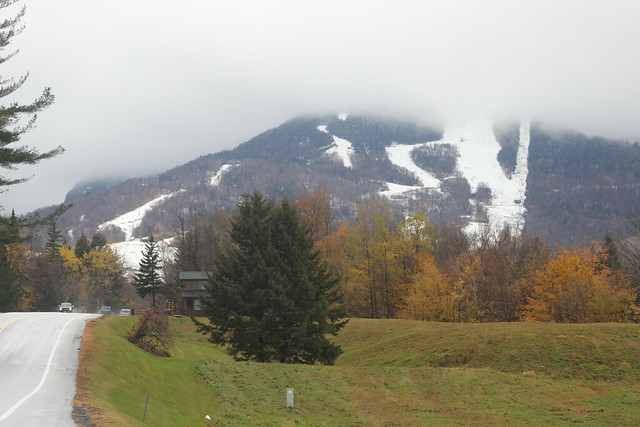 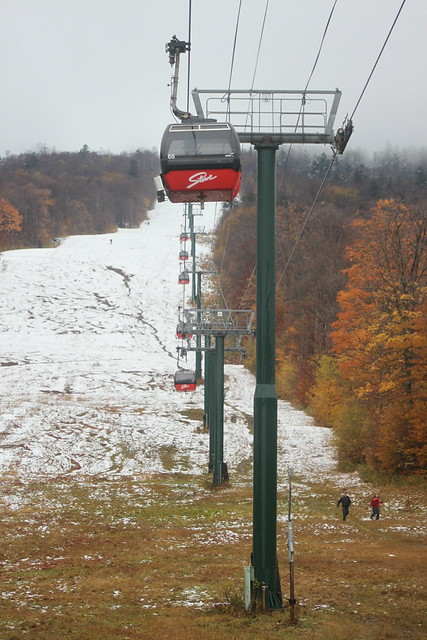 Since the ski lodge was closed we headed back down the road to do some souvenir shopping and touristy stuff while supporting the local economy. Our hotel reservation that night was at the Residence Inn Burlington/Colchester, so we headed in that direction for the rest of the evening.

On the way I googled “Burlington restaurant” and found an Italian restaurant called Trattoria Delia with a five star rating. I called and got the last reservation of the evening (always a good sign). It didn’t look like much from the outside…. 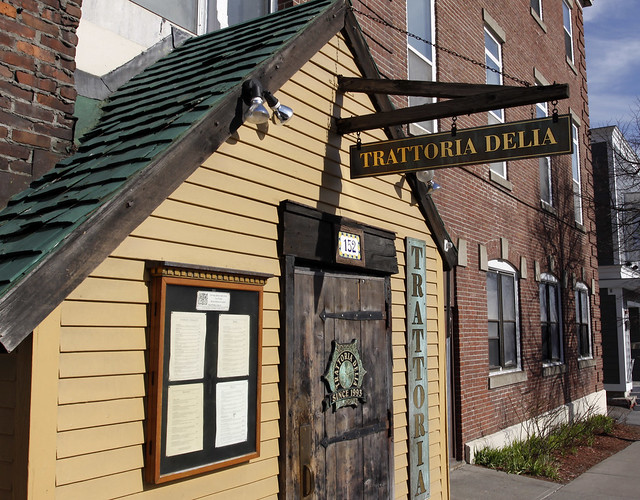 …but the interior of the restaurant was an old sugar house that had been torn down and rebuilt inside the basement of a Burlington building. We had the best Italian food that I’ve ever had at this place. They had this garlic butter to spread on your bread… it was DIVINE. Unsalted butter with garlic, rosemary, parsley and basil all chopped up in it. Oh.My.Goodness. So good. Cannot be described. Ambiance was perfection in that place, too.

Mmm it was excellent.

Can you tell the food was one of the better parts of this trip?

Click any of these links to read more about our vacation!
Day One
Day Two
Day Three & Four