Garrett has been saying “meself” instead of “myself” and it just makes me giggle every single time.

And I just laughed so hard I peed meself a little.

We haven’t been sleeping well around these parts. Note to parents of the 12 month and under crowd! You know how everyone tells you it gets easier? Ha! Yeah right. SUCKAS! I mean yeah, sure, for a while it was great. Then three year old imaginations in overdrive starts turning every shadow on the walls into ghosts named “Lucy” and then thunder storms roll through in the middle of the night and suddenly you’re waking to blood curdling screams every hour on the hour yet again. Garrett is doing a fine job of staying an only child.

Where the Lucy the Ghost thing came from I have no idea. We don’t know too many people named Lucy. In fact I know a grand total of three people named Lucy, none of whom have been formally introduced to Garrett. My husband’s ex-girlfriend’s name was Lucy. Maybe the ghost of girlfriends past is chilling in Garrett’s bathroom at 3:00 am. I don’t what it is, but whatever it is needs to ease on down the road so we can get back to sweet uneventful dreams.

Before I punch myself in the face, let me show you the point of this post! 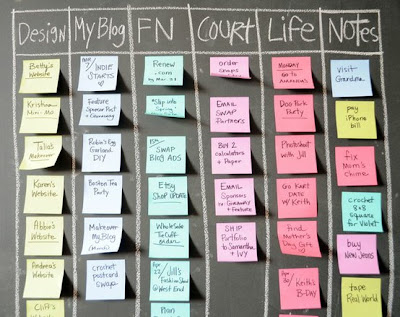 I like it, even though it’s made of chalk. I’ve tried to get behind this whole chalkapalooza that seems to be trending in houses these days. I just can’t do it.

That’s what happens when I think of a chalkboard walls. It heebs me out like, well, like nails on a chalkboard.

But the idea of getting meself organized like that makes me really happy.

I’ll just have to use a whiteboard.

Or a Google Doc.

« Make mine a Rubble
Starting from Scratch »

« Make mine a Rubble • Starting from Scratch »