“That tornado story must be old news by now.”

Those were the exact words I heard this afternoon while on the phone with a business acquaintance from New York.

I quickly informed him that no, it was not old news here yet. In fact, today is just the third week since it happened, and people are still sifting through the piles of rubble that used to be their homes looking for any scrap of memories left to cherish. I have a feeling it will be a very long time before “that tornado story” becomes old news where I live. He apologized for his poor choice of words when he realized just how serious I was, but it was too late. He had already given me a very clear picture of where our biggest news story ranks in some other parts of the country.

I spent the Saturday after the tornadoes helping my husband’s coworker salvage items from her home that was destroyed in Birmingham. Moving is stressful enough without Mother Nature forcing you into it unwillingly. 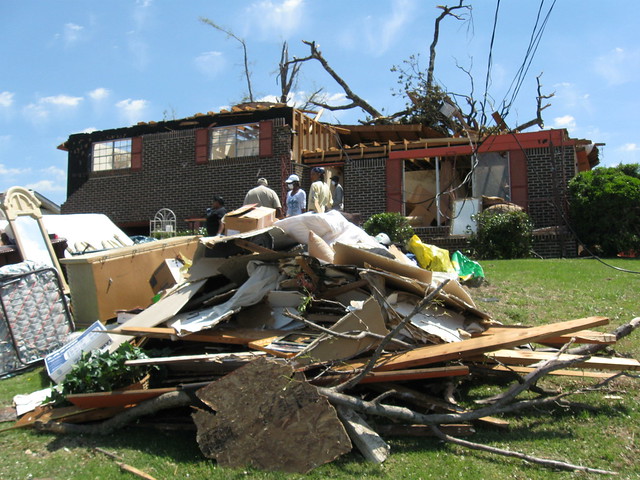 This is her backyard now. 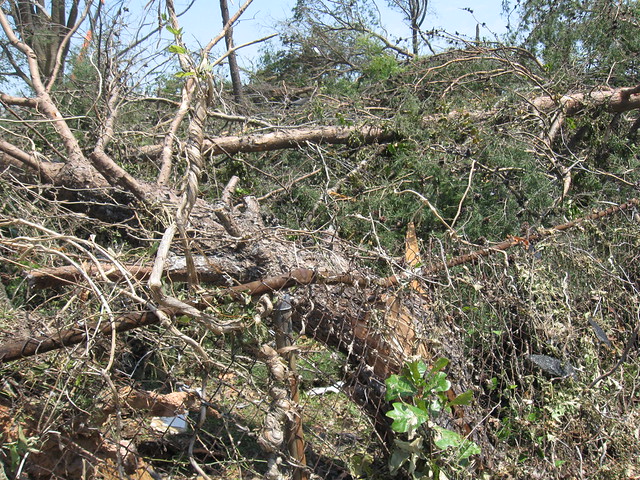 And here is the back of her home. 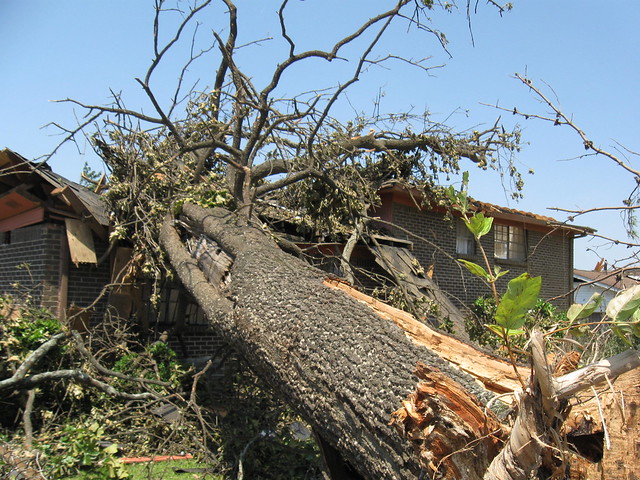 Her roof was blown off and a gigantic oak tree crashed through her dining room and over half of her living room. A filthy mixture of dirt and wet fiberglass insulation covered the walls, floors and furniture. Her house faced the tornado head-on while she took cover in a crawl space off of her basement. Imagine what that must have felt like. 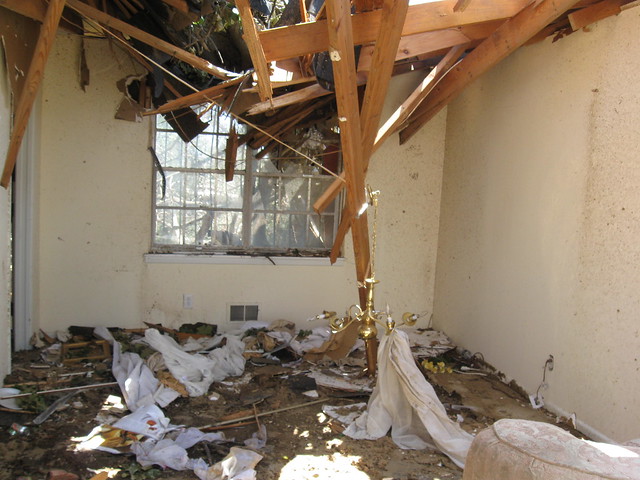 Imagine walking up the stairs after the tornado was over and seeing the sky above. It’s inconceivable, really, but I’m sure it’s an image that she will never forget. 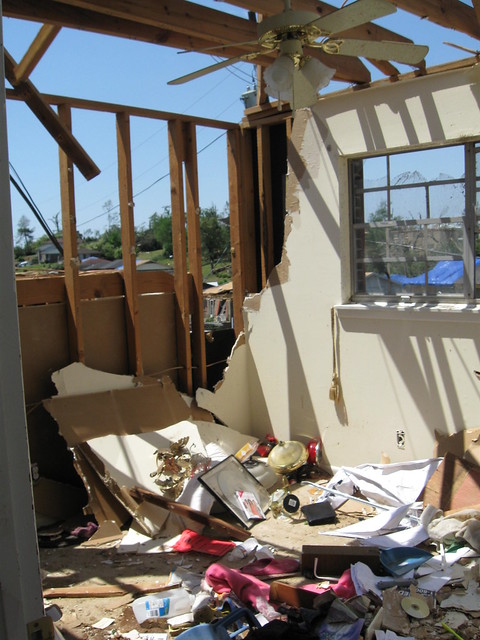 The National Guard had set up a checkpoint at the entrance to her street, so she had to meet us at a gas station near her house so we could follow her past the checkpoint and have access into her neighborhood. Once we arrived we saw that her coworkers, friends and church family had all gathered there to help her that day. The most salvageable items were dusted off and packed into the back of a U-haul truck to go to a storage unit. The rest was left sitting on the front lawn with a big question mark hanging over it all. How does one lady even begin to deal with that kind of clean-up and restoration? And would you even want to rebuild on that spot with the memories of what happened still lingering? These were the thoughts I had as I sifted through her most private possessions that were displayed on her lawn for everyone to view. My head throbbed and my heart ached with the enormity of it all. I’m sure there are many people across the South facing those same questions right now.

Now you might be assuming that this day was a somber event, but that was absolutely not the case.

The mood that day was not gloomy or sad. It was uplifting. Everyone pitched in and worked together quickly and efficiently. All day long everyone was smiling, joking, laughing and genuinely happy to be there helping pack up her belongings. I repeatedly heard comments about how blessed she was and how thankful they were that God protected her during the storm. The mood was very encouraging, heartening and just plain GOOD. I was so proud to be a part of it.

I found out pretty quickly that I wasn’t very helpful with the heavy lifting and manual labor part of it, but I found my niche in distributing the food and water that I had brought from home. I made pumpkin bread that morning and my mom sent chocolate muffins and fresh baked cookies. Comfort food is always the best policy in a time of crisis.

Because we’re all Southern most people’s first instinct when offered food is to say “Oh, I’m fine! I don’t need anything right now.” But I learned from my Watkins selling days that you can’t take no for an answer on the first try. With a bit of prodding most everyone finally accepted and appreciated my baked good band-aids. Some even asked me for the cookie recipe. They laughed when I told them they would have to get it from Otis Spunkmeyer.

But I wasn’t the only one serving food that day. Truckloads of people, all total strangers, were driving through the neighborhood distributing water and sack lunches to anyone who needed it. One man had a package of Tootsie pops for the kids who played happily on the front lawns while their parents cleaned out their houses. 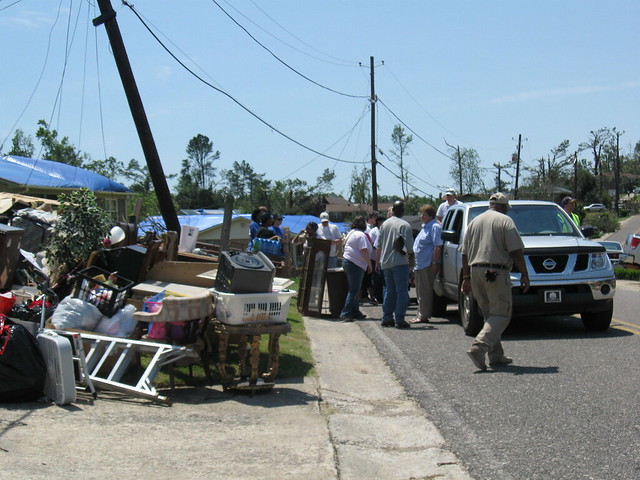 One of the most remarkable things I saw was a group of people who came with chainsaws in hand, jumped out of the back of a truck and started sawing up fallen trees without any questions asked. A group of kids ranging in age from about 8 to 15 would haul all the limbs that the men sawed off the trees to a large pile by the edge of the road for someone to pick up later. That group worked like a well oiled machine. I was so impressed by them. As soon as they finished one tree, they immediately moved on to the next one, all the way down the street without stopping. I was in awe at their effort and their organization. One man was wearing a shirt that said “Cut no corners”. I have no idea if that was the name of their group or just a random t-shirt slogan. Either way it was appropriate.

During our lunch break I walked over to speak with an elderly lady who had been sitting on her front porch across the street watching us all morning. She was eating a banana and drinking a bottle of water. When I asked if she needed anything she smiled sweetly and told me she was just fine, thanks. She told me that she was very blessed because they only lost part of the roof off the back of their house and the windows were blown out in the front. She insisted that she was going to stay in her home, and meanwhile I was looking at a huge gaping hole in her roof. The front windows were already boarded up with plywood, so I knew she had help. I said a silent prayer for her as I walked away, hoping that someone would show up with a tarp and a tall ladder and help get a cover on her house before the rain came back. I have a pretty good feeling that they did.

Another elderly neighbor arrived with two friends in a van to try to clean out what was left of his house. 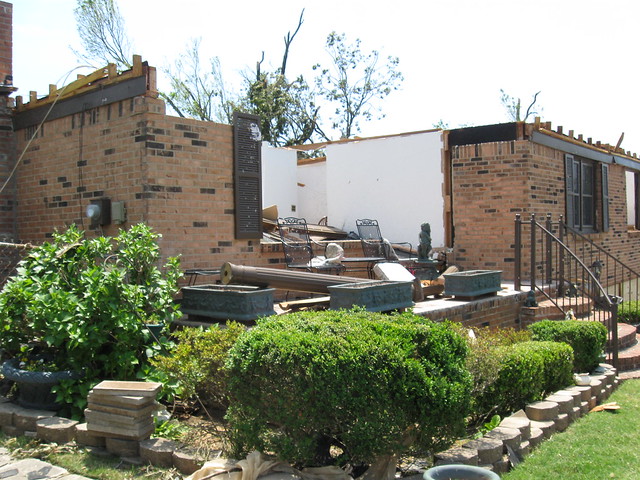 I talked with him briefly but there just wasn’t much to say. I asked if his family was safe. He said they were all ok. To see the sadness in his eyes as he surveyed what was left of his home was heartbreaking. But he had a smile on his face when he nodded his head and told me how they had taken cover in their basement while God protected them.

Story after story about God’s protection and blessings have come out of my tornado ravaged state over the past three weeks. The survivors that I’ve talked with are full of hope and optimism and an admirable inner strength that can only come from a place of true thankfulness.  I felt like I needed to do more for the people who had lost so much, and one late night in front of my computer a thought popped into my head to create an Amazon Wish List to fulfill all the items being requested by the Christian Service Mission in downtown Birmingham.  I asked my girlfriends if they would be willing to share it with their friends and social media channels.  They all agreed, and within minutes I had setup the wish list and it was being distributed across America on social media.   It didn’t take long for it to spread like wildfire.  Celebrities began retweeting it and very large donations started rolling in to the Christian Service Mission.  After the first shipments arrived I received an email from someone at the Mission asking if I was the one who created the Wish List.  I said that I was, and they couldn’t believe how many Amazon boxes were arriving on their loading docks.  It was an outpouring of generosity from across the country from people who felt helpless before, but now had a way to help just by making a purchase.  Witnessing the generosity of people from around the country who have donated to the Amazon Wish List that I set up for the Christian Service Mission has renewed my spirituality in ways that I never anticipated. The outpouring of love and benevolence is SO appreciated. More than words could ever say. Thank you to everyone who has contributed so selflessly.

To everyone who has been affected by these storms my thoughts and prayers continue to go out to you. You are NOT old news to me or any of the other countless volunteers who have stepped up to help you get back on your feet.

I pray that you maintain your inner strength through what is sure to be one of the most stressful times in your life.

I pray that you can find the humbleness to ask for specific items or needs as you encounter them and that God works through others to provide it all for you quickly.

I pray that the people who don’t have a large support network are matched up perfectly to the volunteers who are ready and willing to provide the help.

I pray that the small grassroots relief organizations that have already contributed countless hours to this event will continue to stay the course throughout the marathon of restoration that lies ahead for so many in our state.

I pray that my fellow Alabamians will still be there helping others even when all the reporters have left the scene.

I have a pretty good feeling that they will.

Update:  At last count, the Amazon Wishlist that I created for the Christian Service Mission received contributions of items totaling more than $27,000. There were 1400 items donated through the Amazon Wishlist from 15 different states. 30 semi tractor trailer loads arrived at Christian Service Mission and relief items were sent to over 40 sites in disaster areas across the state of Alabama.  I am so humbled to have been the person that God planted the seed with the idea for this project.  There is no way I could have provided over $27,000 worth of items by myself alone, but it goes to show the power of social media these days when one simple late night idea transformed into a concept that helped so many people.  For anyone in the disaster recovery mode, feel free to view the Alabama Tornado Wish List to get an idea of what items people needed most during widespread disaster relief efforts.