How many of you have remodeled your basement? I’m betting quite a few. My awesome husband has decided to DIY a basement remodel project with the help of his father. Two weekends into it and things are really starting to shape up! I’m super impressed by their progress, so I wanted to show off all their hard work! I’ll be posting the progress photos here on the blog as they continue to get it looking like a completed space.

If you remember my Sketchup concept drawing of the area, we are enclosing about 550 square feet of space down there. 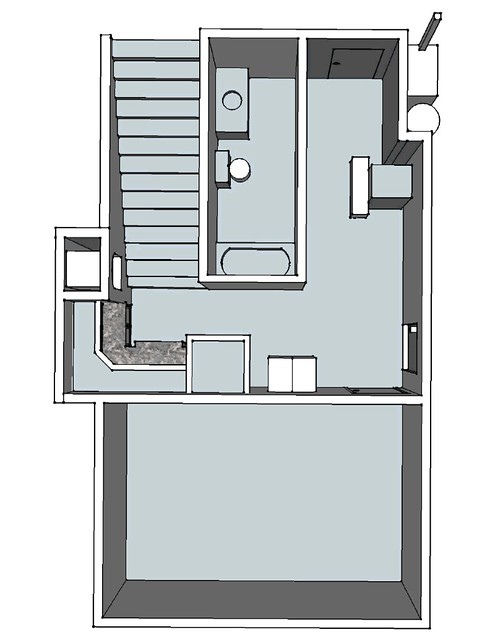 Come, let me show you my basement. 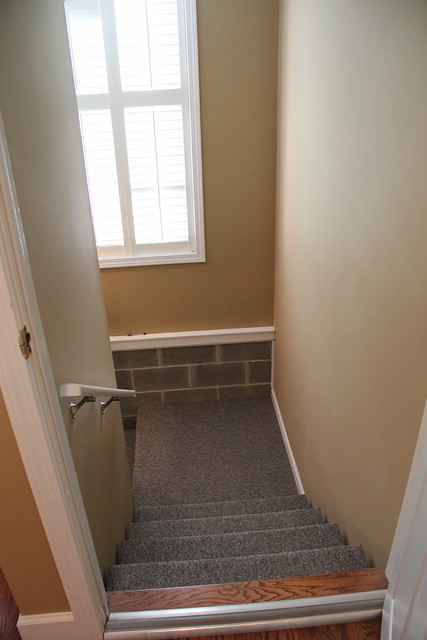 These half finished stairs lead the way. 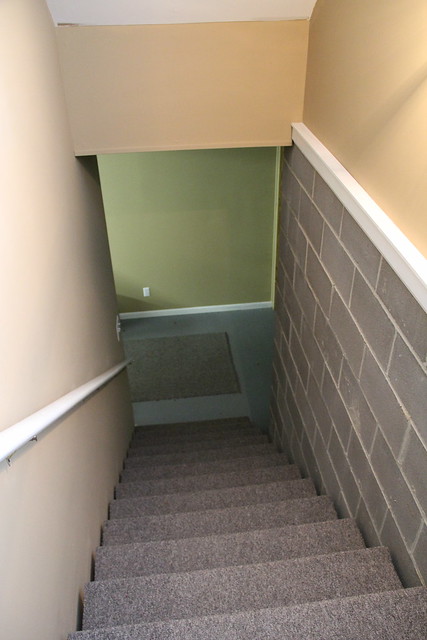 Once you get to the bottom you see a ton of concrete blocks, just like any other unfinished basement. 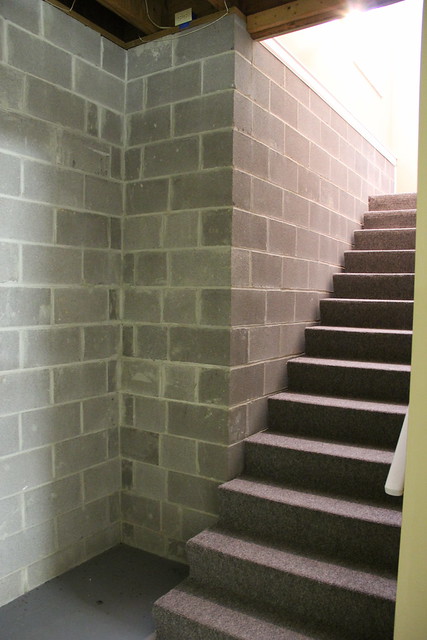 Here is a view looking toward the garage doors. About 1/4 of this area will be enclosed very soon so you won’t see all of our junk! Yay for junk-blockage! 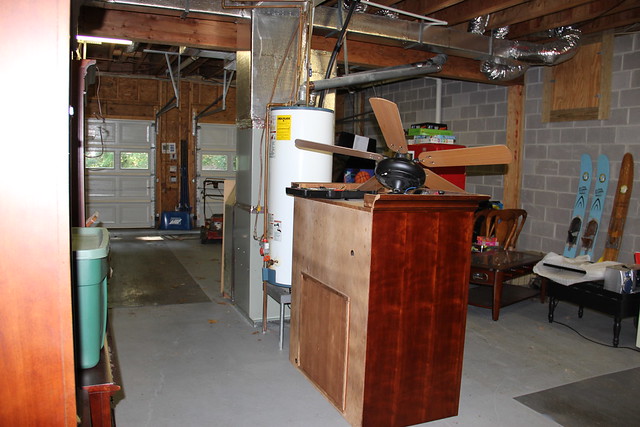 The good news is, there are already some parts that have been finished by the previous owners! Inside these walls is a full bath complete with a bathtub and everything. 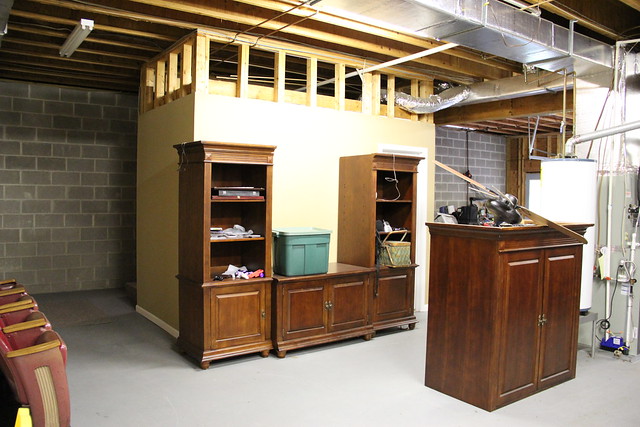 It’s where I spent a few nights huddled under some couch cushions with Garrett waiting for tornadoes to blow on by. It’s not much to look at, but it’s functional and spacious! 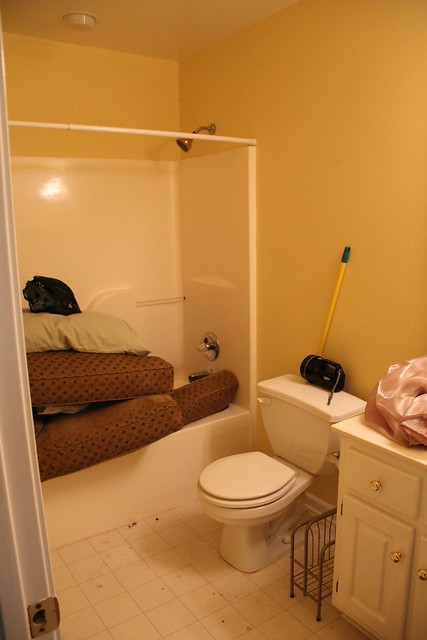 There is a six foot wide hallway between the bathroom and the other finished room. 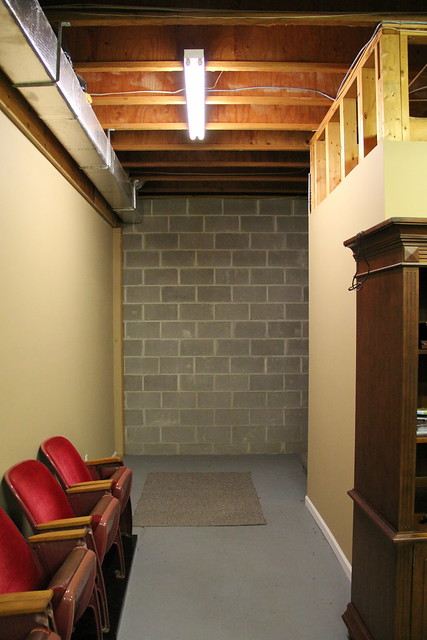 At the end of this hallway (which is actually the bottom of the stairs) is where they will be installing the new cabinetry that I bought. 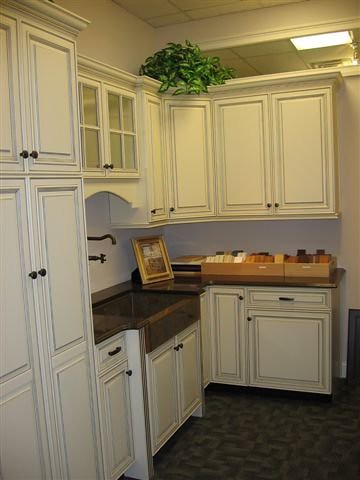 The other finished room in the basement is special.

We call it The Mirror Room. It was used as a workout room by the previous peeps, and two of the walls are completely covered in mirrors from floor to ceiling. When I first walked in I was like, “WOW! There’s me in every direction! Scary!”

I try to avoid this room at all costs. 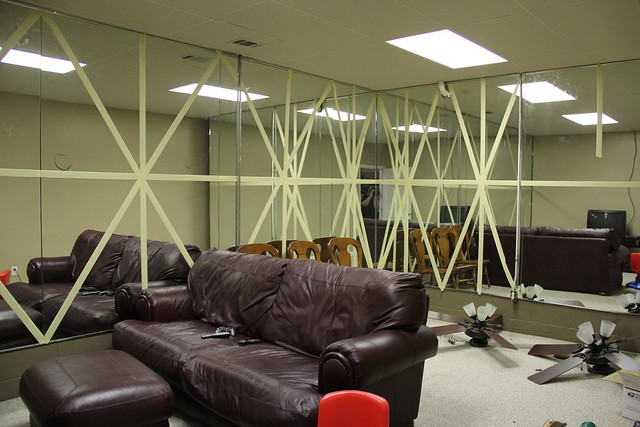 J put tape on all the mirrors because at one point we had considered trying to remove them all. We decided against that plan after having a professional glass installer come out and give us an estimate and he refused to even do the job. He said he didn’t want to end up in the ER with a severed artery. That was enough for us to say “COVER THEM UP!” The plan is to sheetrock over the two mirror walls. Luckily the other two walls are already sheetrock. 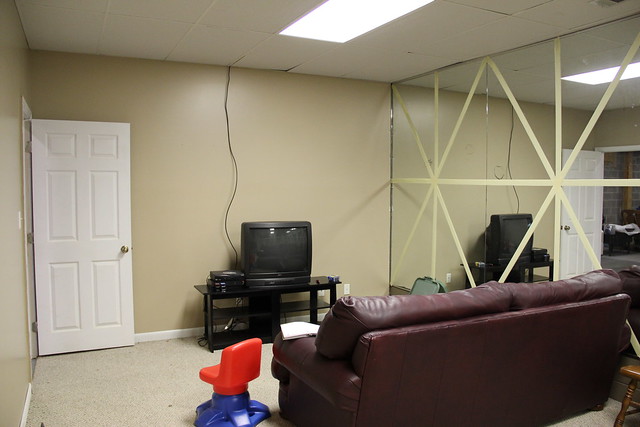 This room had some cheap 2’x4′ acoustical tiles installed for a ceiling. J wants to put in sheetrock ceilings throughout so all of this will be removed. 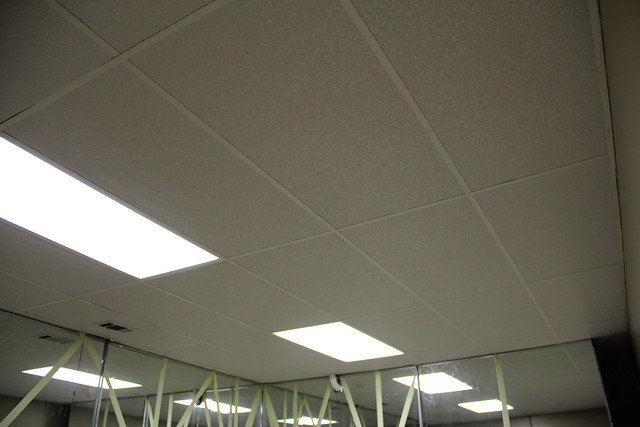 So there you have it. The initial walk-through of our basement. I will post soon with all the progress that they have made so far! It’s coming together!