Hope your first weekend of 2012 was a good’un. Did you make any resolutions?

We spent our weekend at the Opryland Hotel in Nashville meeting characters from Garrett’s favorite Dreamworks films. I’d never been to the Opryland Hotel before, but I would most definitely go back. Like, in a heartbeat. It was AMAZING. One thing I noticed was that every single hotel employee that we encountered was nice. And not fake nice. Nice in a genuine kind of way that made you feel welcomed and loved. We’ve been on so many vacations where the workers are rude, so this was a breath of fresh air for us. True southern hospitality. It was GREAT. Plus the hotel is huge, with multiple atriums so almost every hotel room looks out onto a beautiful view. Our room was overlooking the Delta atrium which has a little downtown area with shops and restaurants. There was a river running through it where you could spend the equivalent of a tank of gas for a 15 minute boat ride. 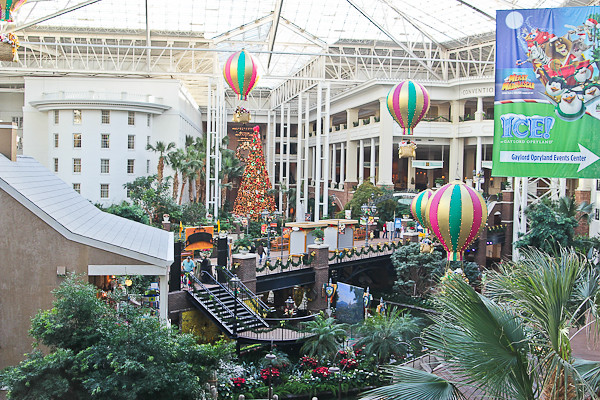 My favorite part of the room was the LIGHT. The diffused light that streamed through our windows made for some incredible photos. I wonder if we could build ourselves an atrium instead of a new shingled roof when the time comes for a replacement? I’d be ecstatic for natural light like this in my house. 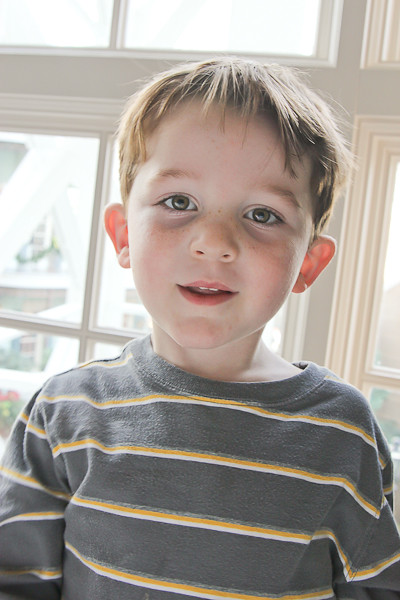 At night the whole place was lit up with strings of Christmas lights. Just beautiful. 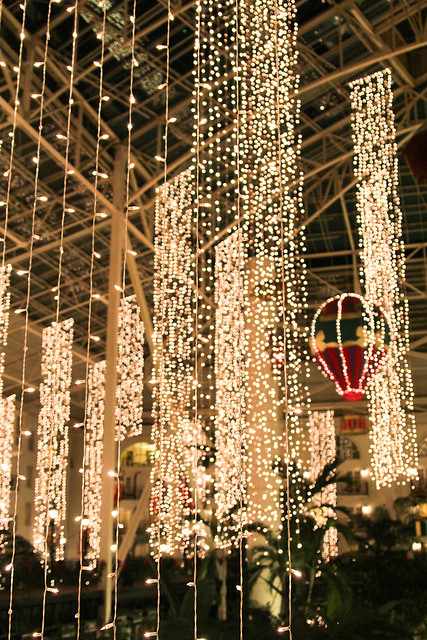 The Conservatory Atrium had a skywalk where you could look down into the gardens below. Very tropical and lush. Walking through it I kinda expected to see Adam and Eve jump out from behind a palm tree, except wearing a little more than fig leaves since it was pretty chilly. 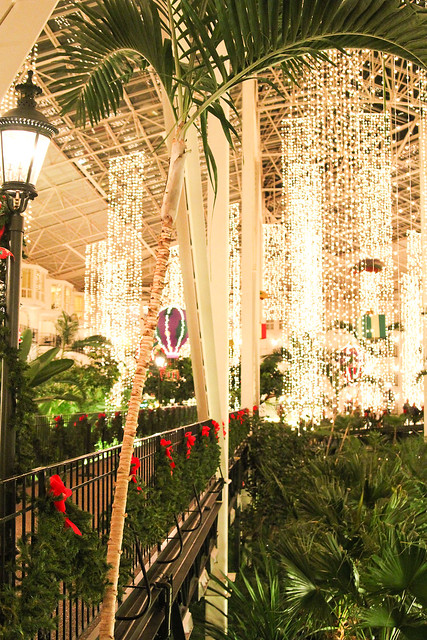 Speaking of chilly… We toured the Merry Madagascar Ice carvings inside a 9 degree meat locker. Garrett liked seeing all the characters carved from ice but wow, was it cold! They gave everyone parkas to wear but of course, being true Southerners, we didn’t have any gloves with us. 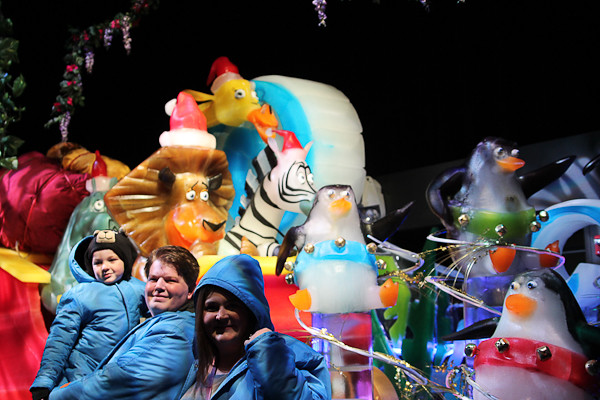 After about 2 minutes into it I began to feel like an ice carving myself. At one point I couldn’t feel my thumb on my camera snapping hand. To anyone who goes to see this in the future– wear gloves. Your digits will thank you. At least my son was wearing a hat. 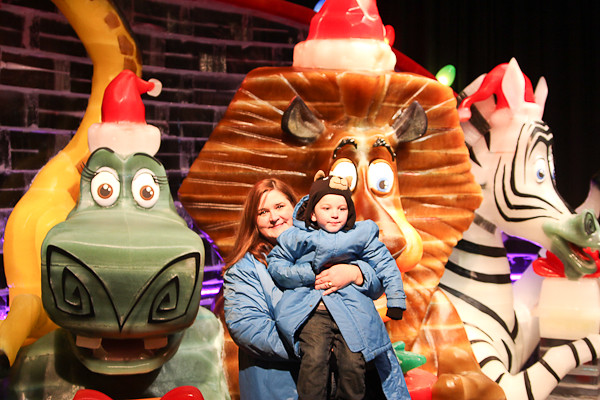 His favorite part was the ice slides at the end. I made J slide down with him while I stood safely at the bottom and took pictures. 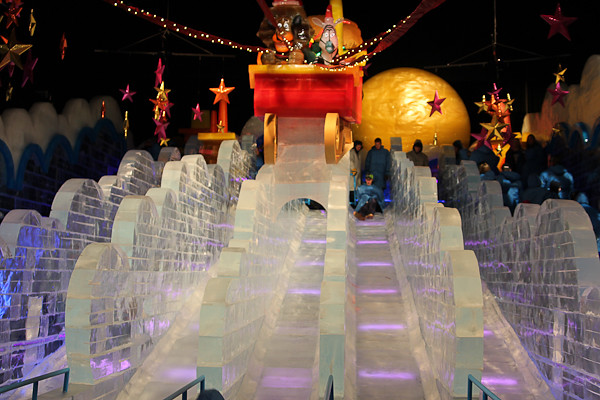 I think he felt like one of Mr. Popper’s penguins on this thing. 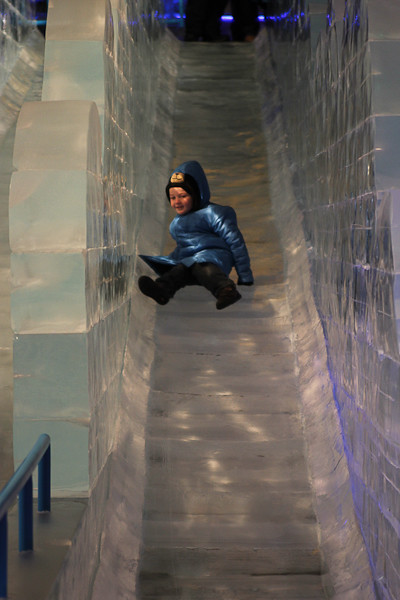 After we exited the meat locker my thumb started to thaw out and my camera defrosted so I got some shots of G meeting the Madagascar penguins. I don’t understand how actual penguins do it with their thin little layer of hair. I watched the documentary that Morgan Freeman narrated. I should have listened closer when those little birds were huddled together in -50 degree arctic temps. How the heck do they not all freeze to death? Things that keep me awake at night. 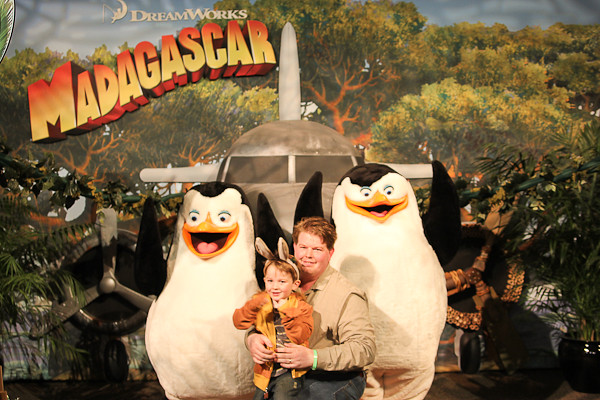 This was the last weekend that this exhibition was open, so they had all the merchandise in the retail shop at 50-75% off. SCORE. We got G an Alex the Lion jacket that had paws, a mane for a hood and a tail. He also wanted a pair of donkey ears. Every other kid we had seen up until this point was walking around with Shrek ears. Or Fiona ears which were just Shrek ears with a tiara between. But my little nonconformist kid insisted on buying the Donkey ears instead. He was the only kid I saw the entire weekend with Donkey ears. Like I’ve said before, he’s never one to do what everyone else is doing. 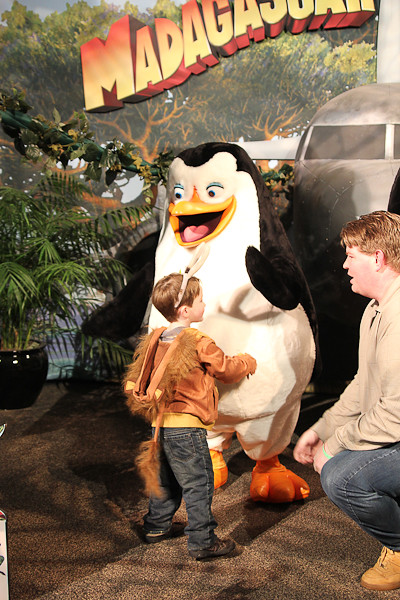 Our vacation package included a ShrekFeast where we got to meet the characters at our table and drink unlimited amounts of Swamp Juice. There was even a chocolate fountain dripping with goo. It was actually white chocolate they had tinted green, but it looked plenty unappetizing. They also knighted Garrett as we entered the place and gave him a free pair of Shrek ears. When I saw that I was glad we bought Donkey ears the day before! 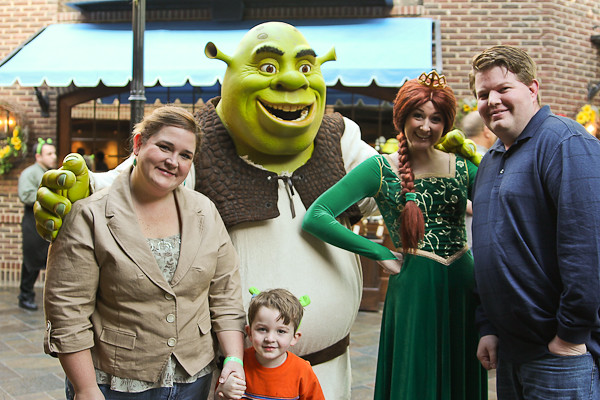 Puss in Boots made an appearance and batted at Garrett’s Dunkey ears. 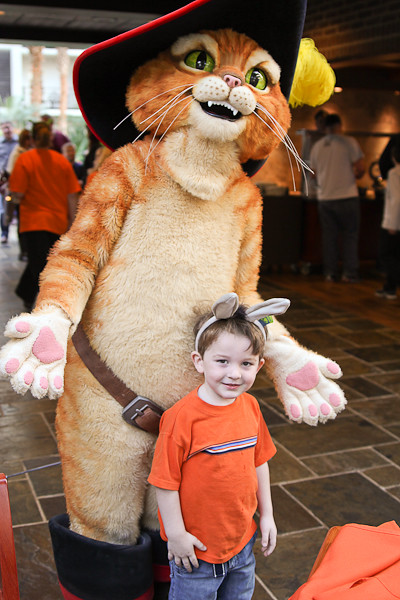 Other highlights of the weekend included decorating a gingerbread house with Gingy. Garrett was more interested in eating the candy than decorating a house with it. He did help shingle the entire roof in Necco candy and peppermints before he started chowing down on the gumdrops. 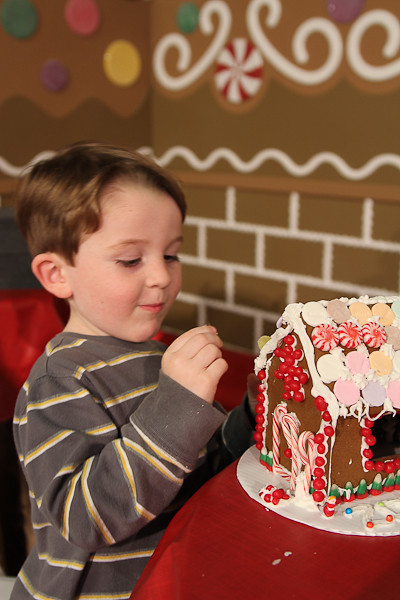 Gingy was one of my favorite characters. His backside looked like a real cookie straight off the pan. Loved it. 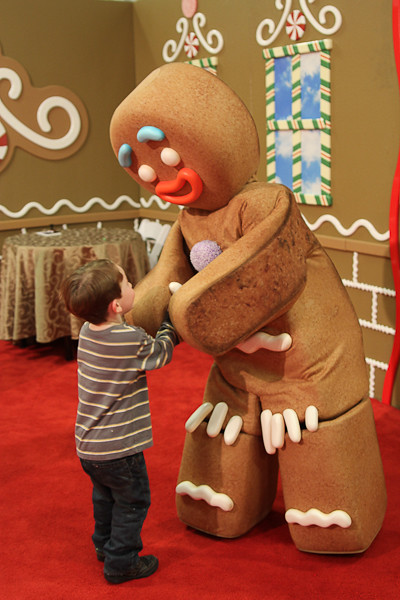 Every day while we were there they put on three shows where all the characters came out and danced and performed. 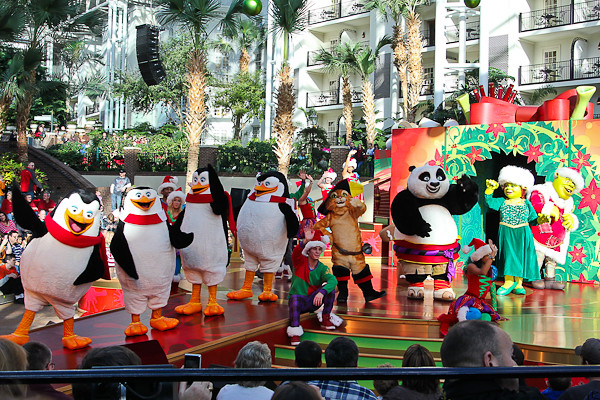 I wasn’t sure why Fiona only came out for the show and not at any other time during the trip. Was she too good to pose for the camera? Yet another deep thought that keeps me up at night. King Julian wasn’t too good for it, Fiona. Don’t be such a diva. 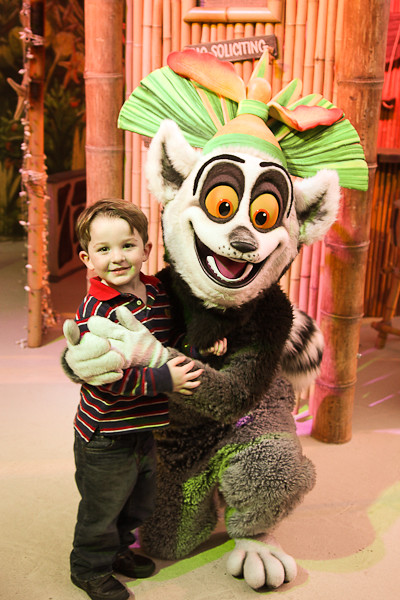 And… speaking of divas. Garrett was in rare form on this trip. One minute he was happy and loving, the next he was the spawn of the Devil. He will be turning four in less than a month, and he really is giving me a run for my money with the back-talking and attitude. It’s like he’s four going on fourteen some days. After the terrible twos ended I sang the praises of age 3, but I have a bad feeling about age four. Lord, give me strength to deal with this mini-me version of myself and my father. The donkey ears were appropriate, given how stubborn this kid is. He’s gotten a quadruple dose of stubborn from all sides of his family, so I know he can’t help it, given his DNA. 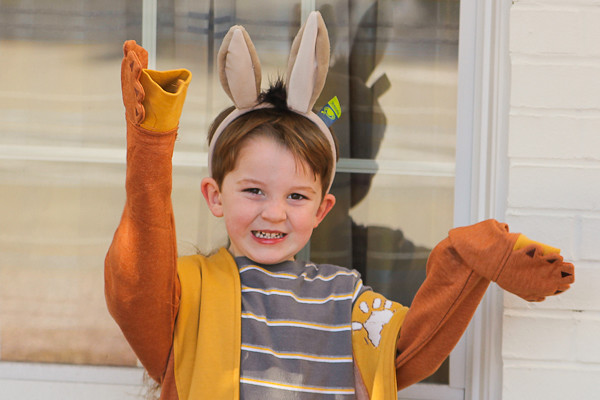 J and I are trying to remember to stick together and be strong and not give into his demands. We are consistent with our discipline, even on this vacation and even when it’s not fun for us. On New Years Eve he got into BIG trouble for giving us major attitude after he had already been put in time out more than once. So, we took him back to the room and called it a night at about 5:00 in the afternoon. Our actual NYE consisted of ordering room service pizza and watching the Auburn game. Garrett was so tired, so he took a late nap and felt a little better. Three year olds just can’t hang on NYE.

I will say that he was much sweeter after his nap. That part makes all the other parts easier to bear. 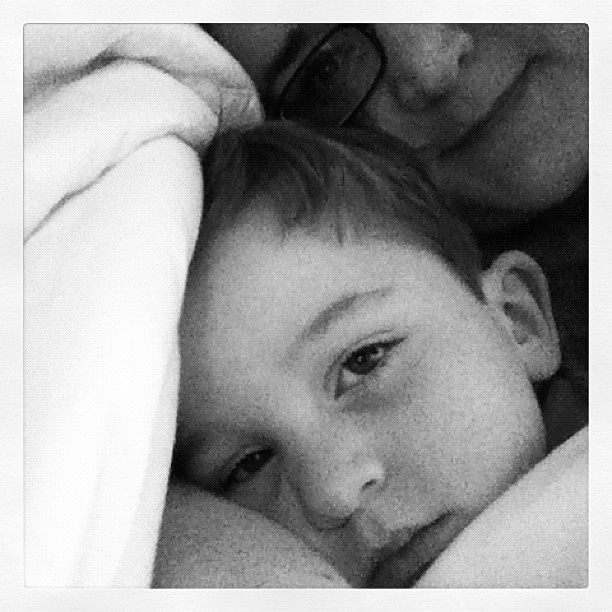 I decided to get out of the room alone for a little bit and go see what all celebrations were happening in the hotel. I also figured it would be a good chance to get some night time shots of the lights. There was a fifty foot tall Christmas tree inside this place, which has some serious glow! 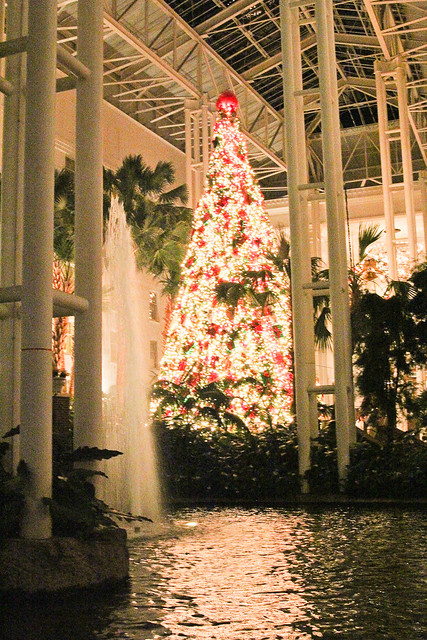 As I was wandering around enjoying the lights and music and some whine-free alone time, I stumbled upon a couple standing underneath this beautiful gazebo all alone. As I walked by I saw the man get down on one knee in front of the lady, and I quickly realized that he was proposing to her!! It was like something from a fairy tale, so I couldn’t help snapping a few photos of them. 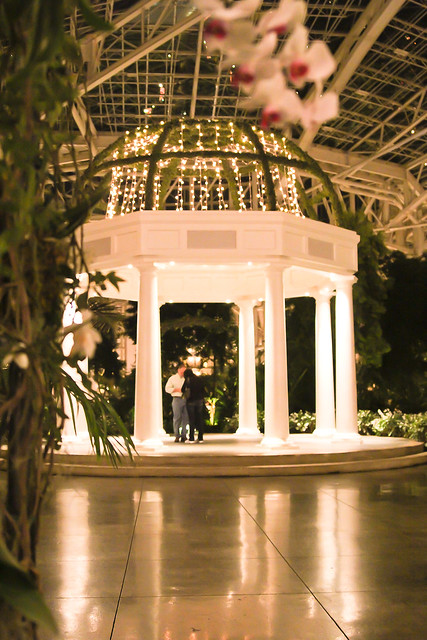 I wondered for a second if it was weird for me to take photos of their private moment, but then I realized that they would never get this moment back so I decided to go for it. I regretted not being quicker on the draw and taking some of him down on one knee. 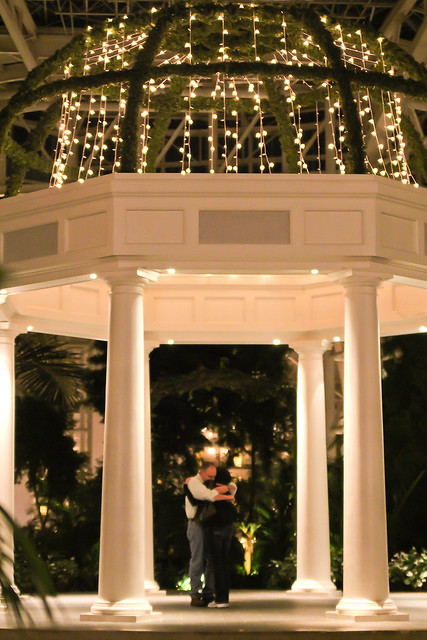 As they began to walk away I approached them and and congratulated them. Then I told them I had taken a few pictures. I was relieved that they didn’t think I was too stalkerish, but instead were happy to hear that I had captured the moment for them. They were thrilled, actually, to have some pictures of the event. I was so honored to have been a part of their special night and thankful that I was in the right place at the right time with the right camera to document the occasion for them. I got them to take one more photo together, then I got her email address so that I could send them all to her when we got back home. 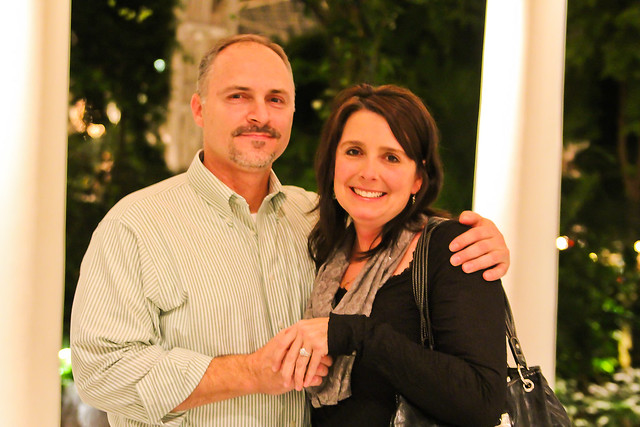 She was so thrilled to receive the pictures the next day that they offered to pay me for my photos! No way could I have ever accepted payment for something so simple. It just reinforces the fact that I love my little photography hobby. I am glad that I’m able to use it for things like this.

It makes all those million photos that I need to clean off my camera cards worth it.

« 2011 Year in Decorating Review
The DIYables and the Would-Be-Niceables: my 2012 home goals »