I’m always amazed how people are woven into our lives to teach us lessons in love, hope, humility, and kindness. God has a funny way of wrapping up tough situations with a big bow on top and handing them back to us in the most unexpected ways.   Today was one of those days for me.

But first let me back up and start from the beginning.

When I was a child, I was diagnosed with a rare hip disease called Legg Calve Perthes.  I touched on the subject in the story of my childhood home. I also talked about my whole experience over in this post if you’re interested to hear all about it in great detail.  If you just want the Cliff Notes version, allow me to hit the highlights.

From Kindergarten through third grade I was not allowed to run, jump, skip or hop.

Nothing more than walking slowly was allowed.  The risk of damaging my hip joint was too great, so during the growing years I was put on strict doctor’s orders not to put any amount major of weight on my leg unless it was in a brace.  Before I got the brace in the 2nd grade, I was extremely limited in my mobility.  Every day when recess time rolled around, I was told that I had to sit inside at my desk and color while all of my classmates got to go outside to play in the sunshine.  Imagine telling a six year old child that they cannot go outside and play with all of their friends.  What do you think happened next?  Of course I was devastated, and would start to cry.   To add insult to injury, my first grade teacher didn’t have a sympathetic bone in her body.   Whenever I started to cry, she would go over to her curtained cubbyhole and pull out this gigantic rubber pacifier that she would hang around my neck. Then, she would call me a cry-baby in front of the entire classroom.

Eventually the PE teacher discovered that I was not allowed to go outside with the class because of my hip.  In an ironic twist of fate, that same PE teacher had also been diagnosed with my exact same rare hip disease when he had been a child.  So, every single day the PE teacher would come to my classroom, pick me up and place me on his shoulders and carry me outside in the sunshine to watch the other kids play.  I still was not allowed to run, jump, skip and hop like all the other kids, but I was happy perched atop his shoulders because I was outside in the sunshine and not left behind sobbing in an empty classroom wearing a giant pacifier around my neck. 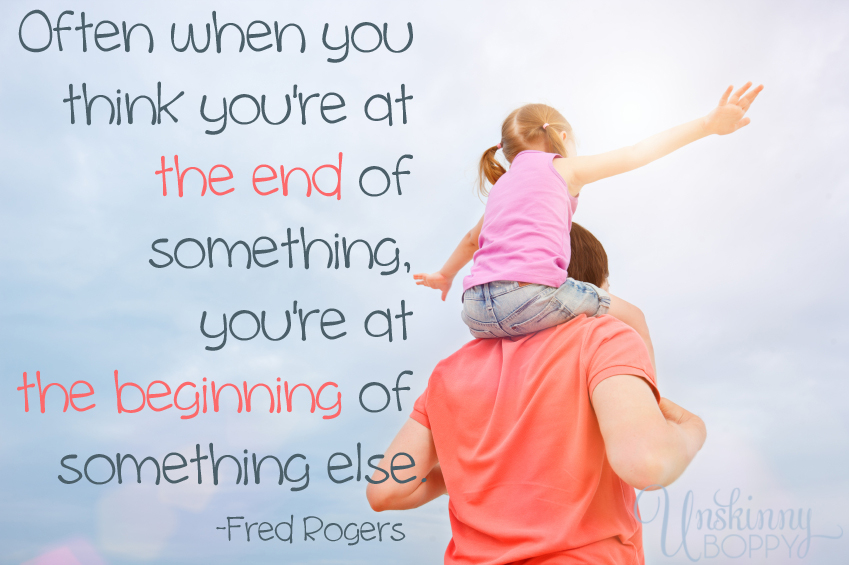 Fast forward thirty years to last summer, to the day before my son started Kindergarten at public school.  I was sitting in the school hallway assembling a PTO Angry Birds bulletin board when Kelly, the PTO president, came to me and asked me to look at something outside.  She took me out to a scraggly, forgotten area between two of the school buildings and showed me a concrete slab with a few old toys scattered around it.  “This is our special needs playground.  I would like to make it the PTO’s mission this year to give these kids a better place to play.”

She went on to explain to me how the kids in the special needs class were not allowed to go outside very often because the area was not fenced in, and some of them were prone to wander.  Since there is just one teacher and several aides in the class, they couldn’t handle taking all of the kids to the playground all at once.  They only took the kids outside a few at a time so there was close to a one-to-one student to teacher ratio.  This meant that while a handful of students got to play outside, a few were left behind in the classroom with an aide while their classmates went outside in the fresh air.   Sometimes the entire class stayed inside because it was just too hard for the teachers to take them out at all without a fence enclosure.  Just one glance around that concrete slab with a few broken toys that they called a playground, and I was heartbroken and convicted.  I knew that Kelly and I were going to make this happen for these kids this year.  There was not a doubt in my mind it was going to happen. We encountered a few stumbling blocks along the way, but we were determined. Every single child deserves the opportunity to get outside and enjoy fresh air in the middle of a school day.  Kelly and I made it our mission that day to get it done for those kids.

Here was the playground in the beginning of this school year: 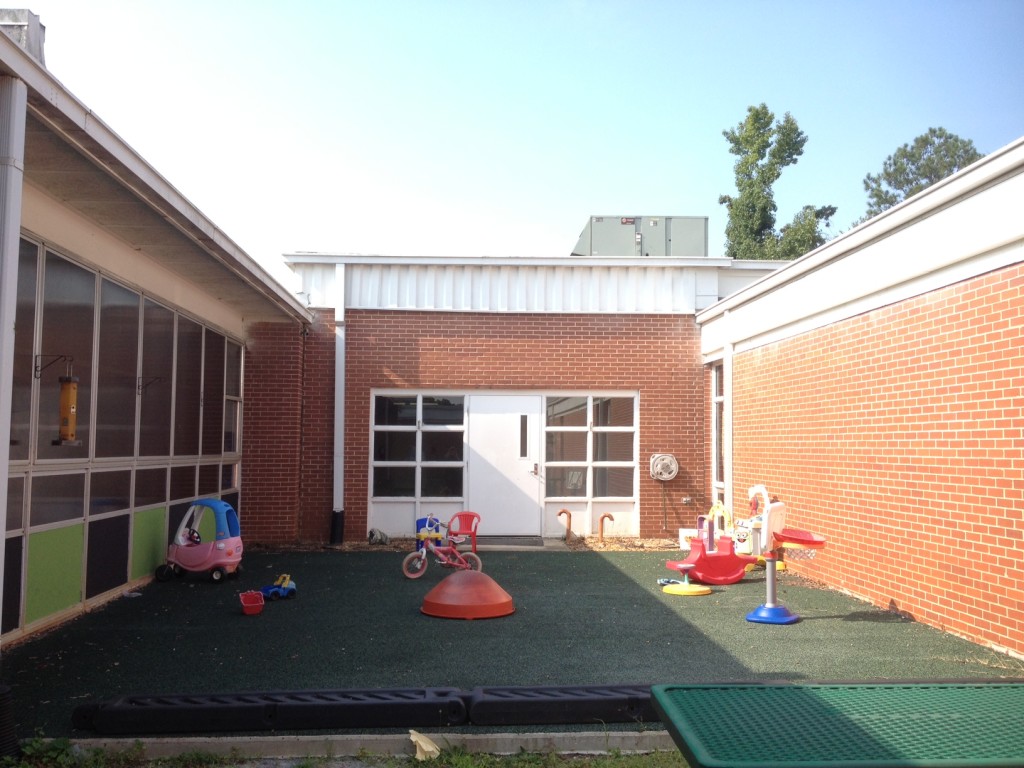 In case you don’t know?

Playground equipment ain’t cheap.  And adaptive (ADA) playground equipment is even more expensive.   The previous PTO members had been trying to raise money to build an adaptive playground for years at the school, and up until this point they had raised enough to add in a major underground drainage system and pour the concrete slab with rubber surfacing, as well as leave about $1,000 toward the goal of $33,000 for the special equipment.  That was a major accomplishment, but there was still equipment needed, and a fence. There were a lot of other peripheral items on the quote but we eventually decided to break it up into separate phases so that it wasn’t such a daunting amount of money to raise.  The equipment that we wanted the most was a platform swing that locks in a wheelchair and another big swingset with safety bars that latch kids in so they can swing safely.  This total amount came to just over $10,000.  That sounded way more do-able to me than $33k.

Kelly and I set to work at the beginning of the school year with this goal in mind.  I wrote letters to local business people and made phone calls to politicians. I created a flyer with photos and mailed it out to lots of local businesses.  I called the local newspaper and put out a request to the public for donations.  We asked the PTO to vote to give a portion of our money to the playground fund.  I called all of my connections and got items like hose pipes and hose reels and bird feeders and mosquito repellant donated from True Value Hardware. At Christmastime last year they generously donated over $700 worth of products to help our school! (Thanks True Value!) 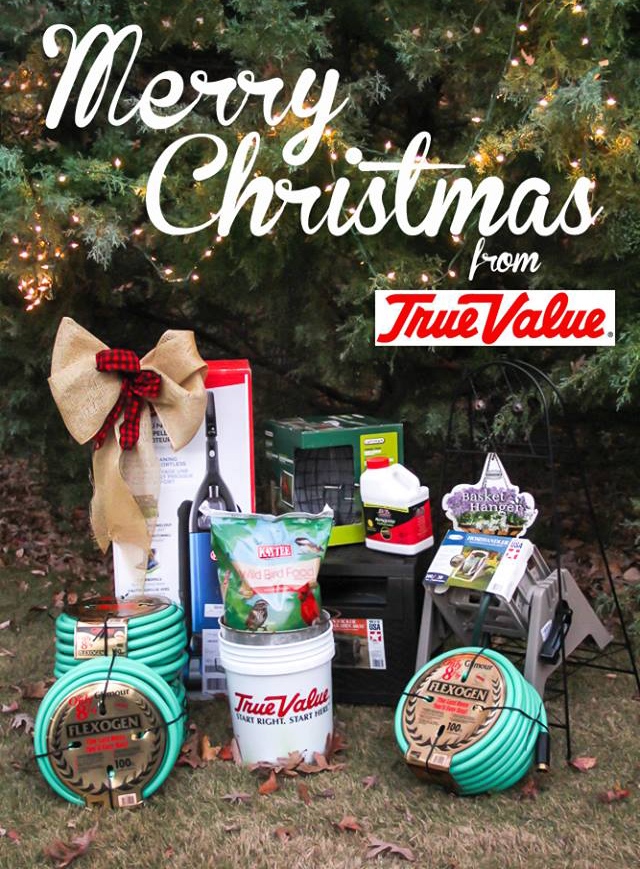 I got EXTREMELY lucky and worked out an unbelievable sale price on six foot high white vinyl fence panels from the contractor sales desk from another big box store. (Thank you Larry!).

One of the teachers had a son who needed to complete his Eagle Scout project, and he worked SO hard over his entire Spring Break to get the fence and gate installed for us.  The principal had a friend who owned a sod farm that donated 3 pallets of fresh sod for us to lay on top of the scruffy areas.  Kelly got out there along with the principal’s husband and a few dad volunteers and layed three pallets of sod by hand last week before it started to turn brown. 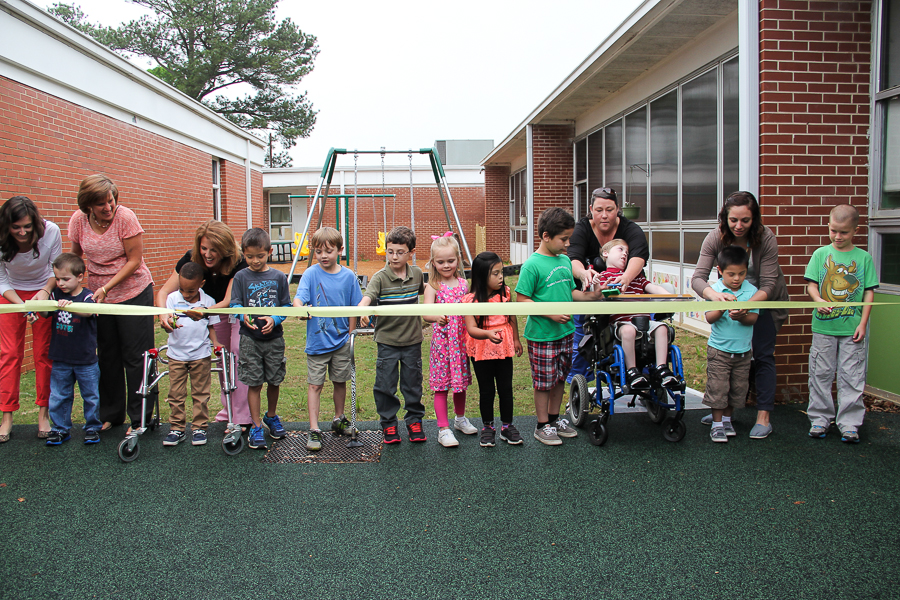 I’m am thrilled and overjoyed and just SO FREAKING HAPPY to be able to finally announce that Phase One of the new special needs adaptive playground is OPEN FOR BUSINESS.  We had a ribbon cutting ceremony with all the kids and donors and volunteers today. The turnout was just incredible, and everyone was overjoyed by the end results. 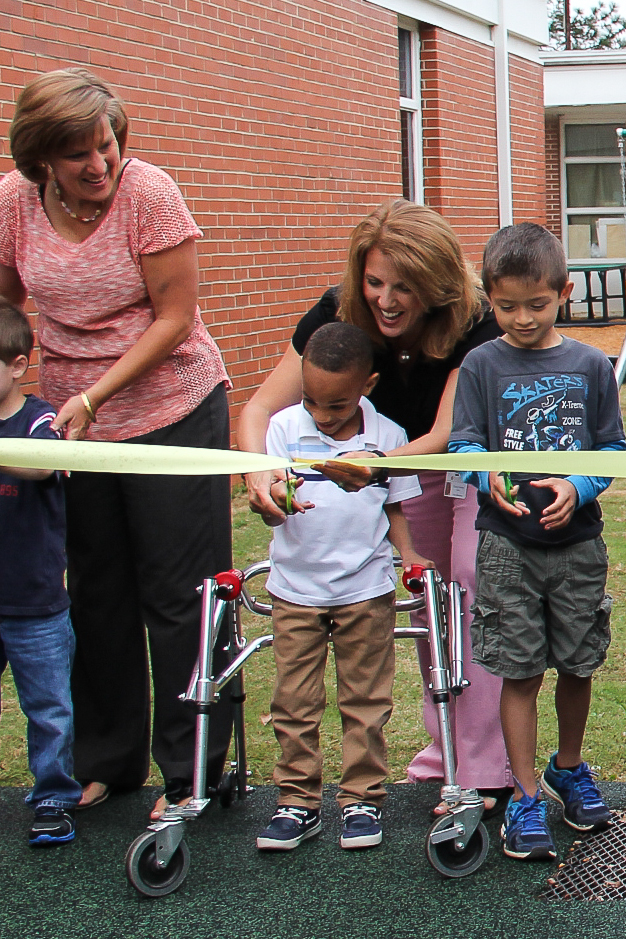 I could not be more ecstatic about the way this entire labor of love has unfolded in front of me.  The kids have been allowed to go outside and play together as a class together for a few weeks now.  The weather has been perfection. 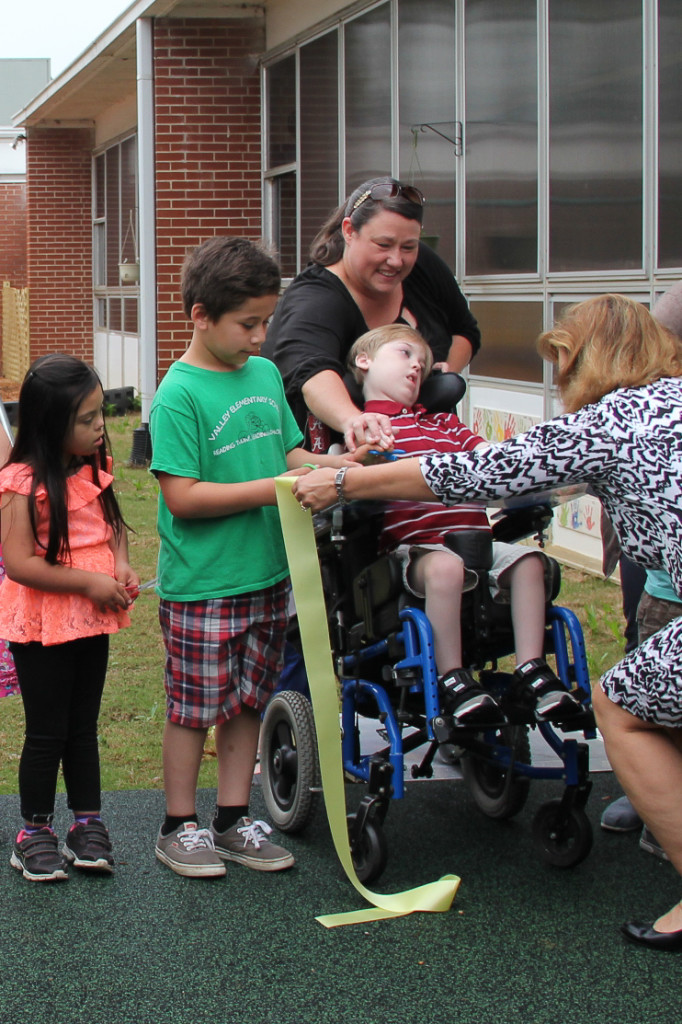 And here are the results of all of our hard work this year: 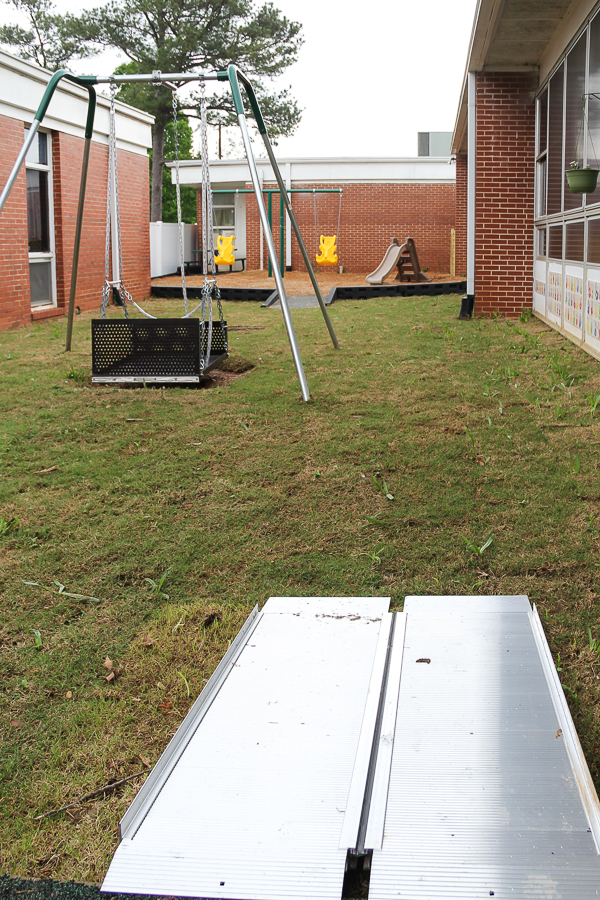 The sun is finally shining again after the longest, hardest winter in recent memory.  As I type this I am imagining those happy faces smiling in the sunshine and it just makes me want to cry big tears of joy. 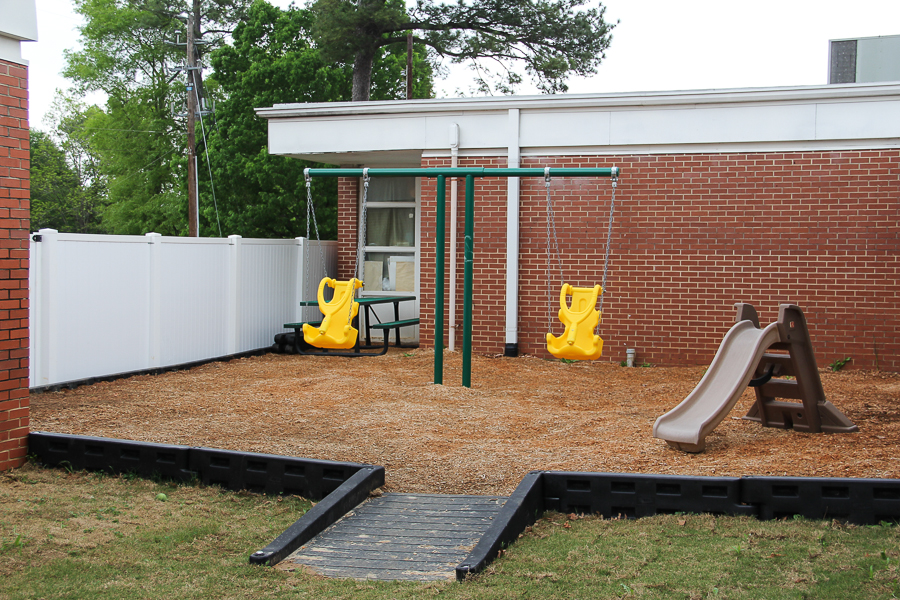 Not only for these babies cutting the ribbon today with their tiny scissors, but also for that six year old little girl inside me who got to sit on the shoulders of a PE teacher over 30 years ago and smile in the sunshine, too.