The day started like any other–a lazy weekend when my husband took the kids to visit his parents at their lake house. I stayed home to work on projects and get the laundry put away. But as soon as he walked through the door, I could tell something was different. Something had happened.

His eyes were shining with excitement as he pulled out his phone and said “I found a building today.”

I had been toying with the idea of opening a brick and mortar store to sell… something. Antiques? Home decor? Interior Design Services? Photography classes and weekend blogging retreats? Jewelry boxes made out of seashells? Honestly, I had no idea what I wanted to sell but the idea of becoming a shop owner would not leave me.

I had looked at an old house that once was the local herb store but it had holes in the ceiling and a price tag that was way out of my budget. So when my husband said he had looked at a building, it was not an unexpected thing.

But this building that he looked at was something different. Something unique and special. It was a turn-of-the-century storefront building on Main Street in the small town where I had attended college. While I was in school there (and the twenty years prior) it had been a gift shop and bookstore. I had been inside a few times but I didn’t have any kind of lasting impression of the place. 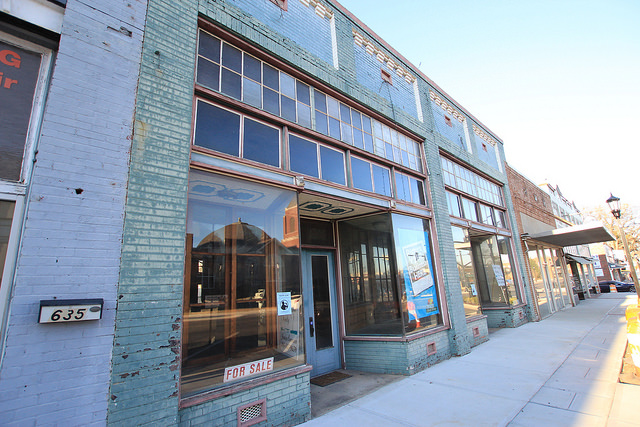 But as soon as he pulled up the pictures on his phone, my jaw hit the floor. 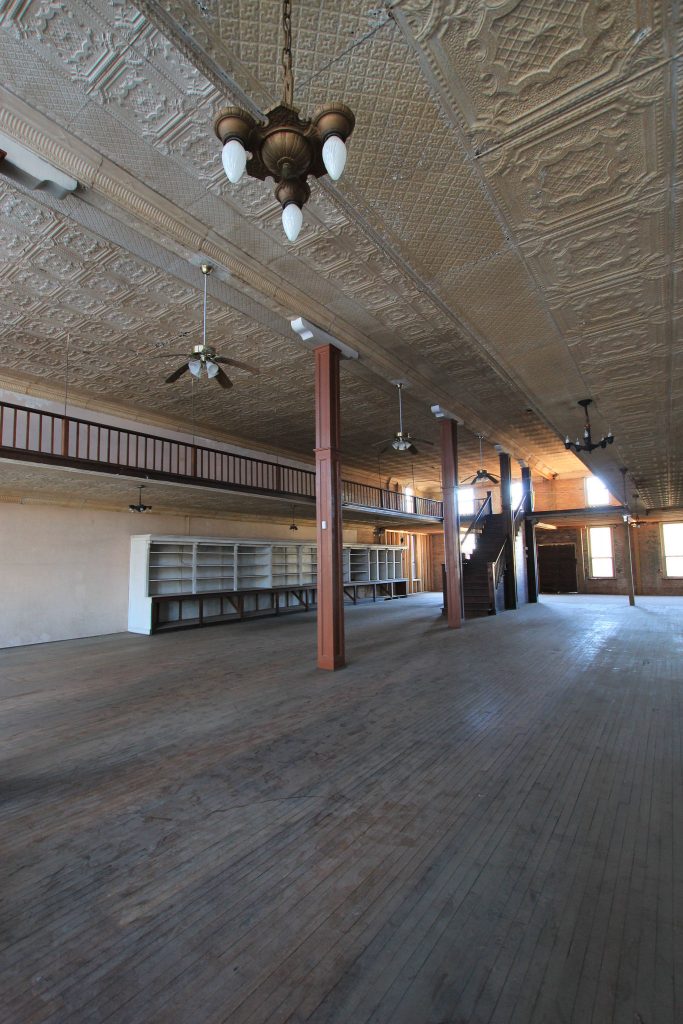 Staring back at me in the photograph were original hardwood floors, exposed brick walls and a soaring pressed tin ceiling with a mezzanine balcony around the entire perimeter of the building. 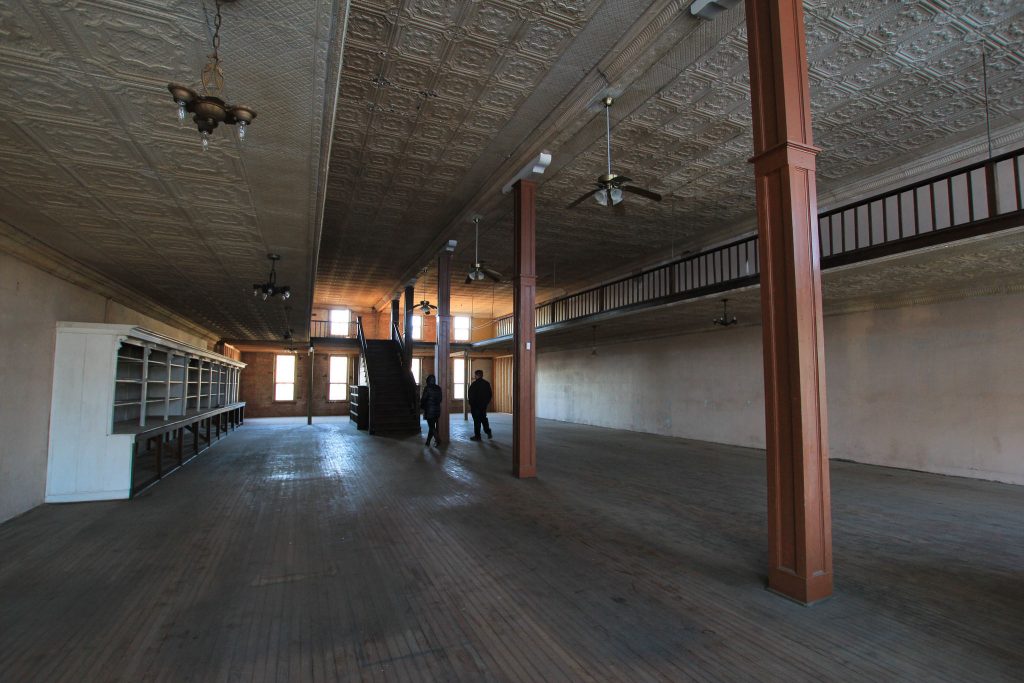 Everything was covered in a century’s worth of dust, but still the space oozed with a vintage charm that could not be replicated by a newer building. These mouldings were to DIE for. 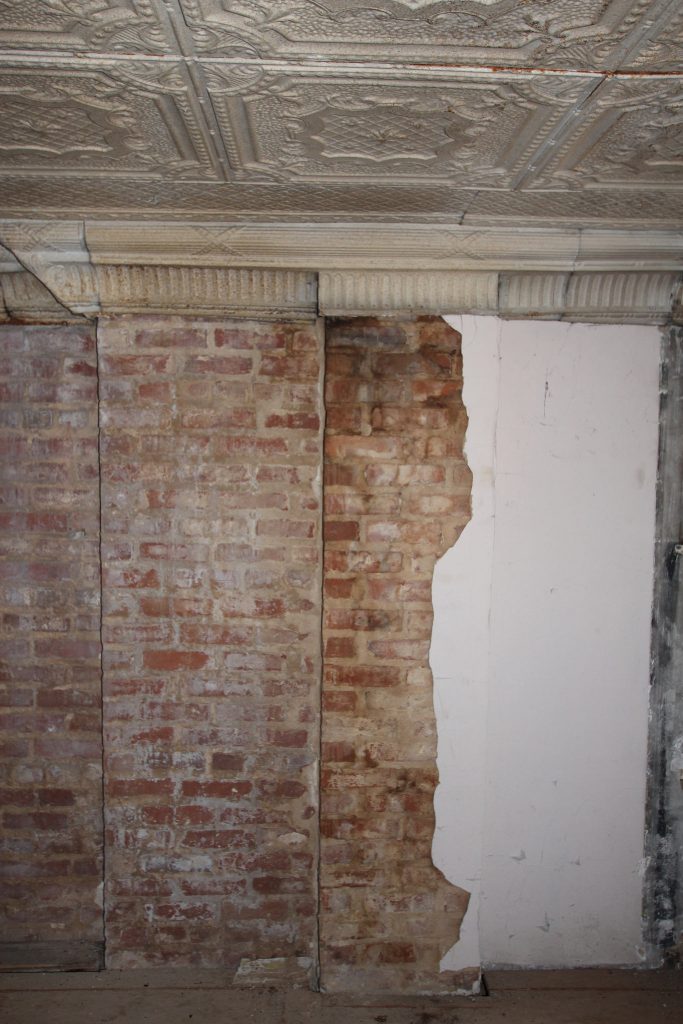 It was something very special.

It had been built around 1895 to serve as the Mercantile for the town and college. Throughout the years, ownership had changed hands a few times, but the current owner had been in the building since the 1970s or 80s. 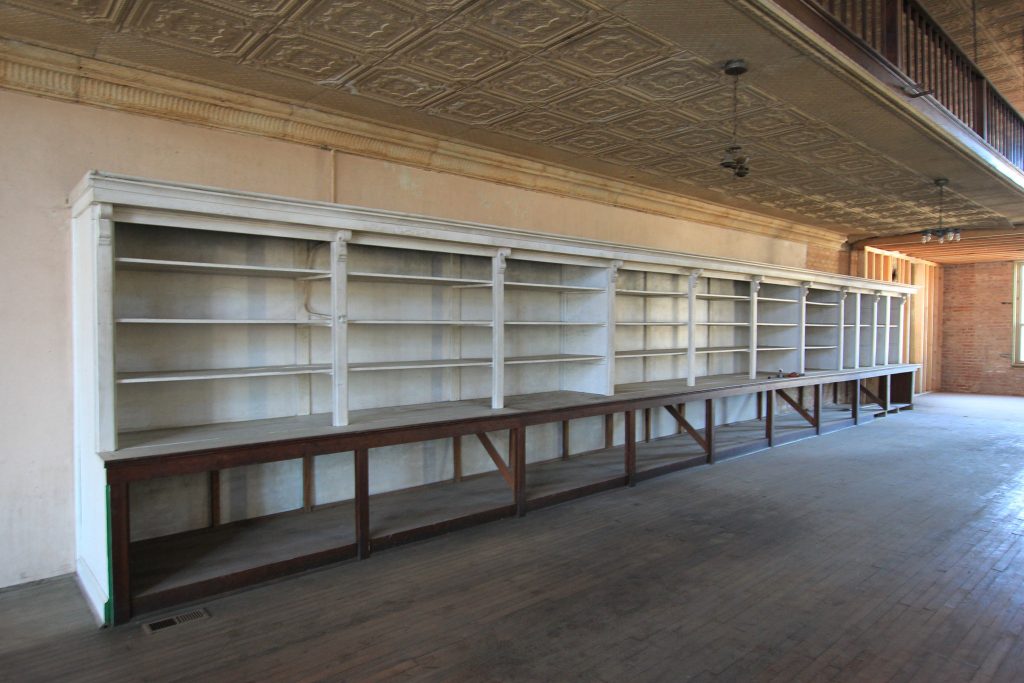 It had been totally gutted to bring it up to code requirements, so it was basically just a shell of a building. There was no plumbing, no heat or air conditioning, no working light fixtures and a whole lot of construction that needed to be done before it could open the doors to the public again. 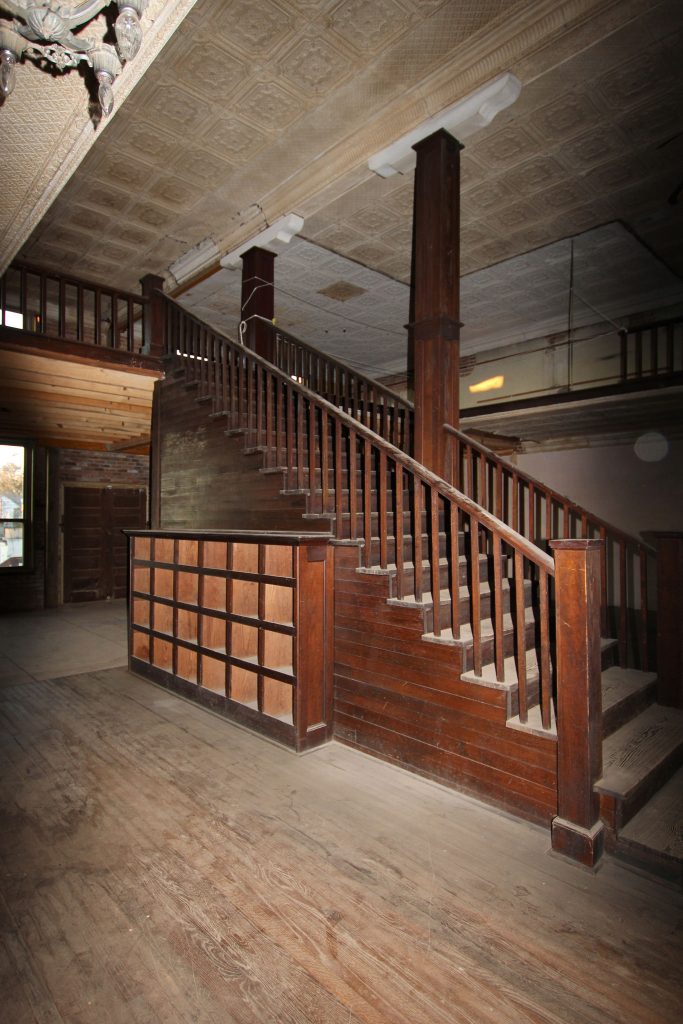 The thought of bringing an old Mercantile back to life excited me. In this age of Pioneer Woman and Joanna Gaines buying old buildings and renovating them, it really made me want to follow in their footsteps.  Mandi at Vintage Revivals is currently in the process of transforming an old Mercantile into her home. It is the hottest trend of the moment.

Unfortunately, I don’t have access to the bank accounts that Ree and Joanna do.

Regardless of that whole bank account thing, I still decided to pursue the idea because my husband was ALL IN. As a lover of all things vintage, he fell harder for the building than I did, but he would not have been the one who was going to have to handle the construction and remodeling details. Because my husband fully intended to keep his day job, those responsibilities would fall on me. 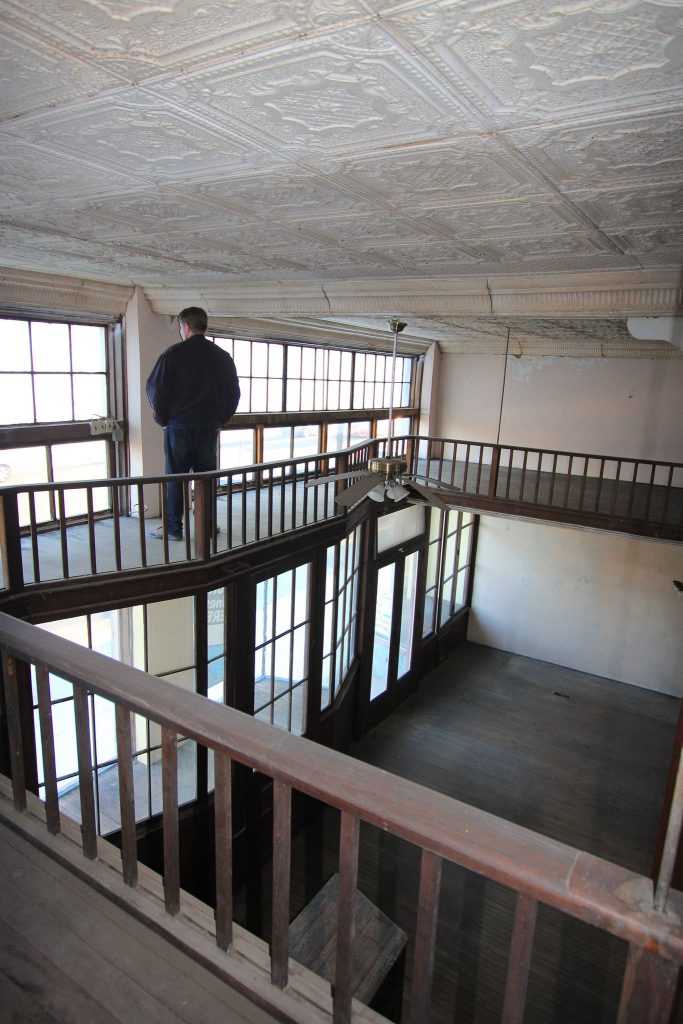 I had a great vision of what the space could look like. I filled an entire Pinterest board full of nothing but storefront ideas and vintage commercial spaces.

I pictured it as a multipurpose space- part wedding / music event venue, part coffee shop, part design studio where I could take amazing photographs of things or host classes and workshops for my blog readers. Maybe some vintage consignment booths to help pay the bills. I pictured everything from acoustic musicians playing in-the-round to a Makery with arts and crafts exploding all over the walls.

Couldn’t you just see a party setup like this in that amazing building? 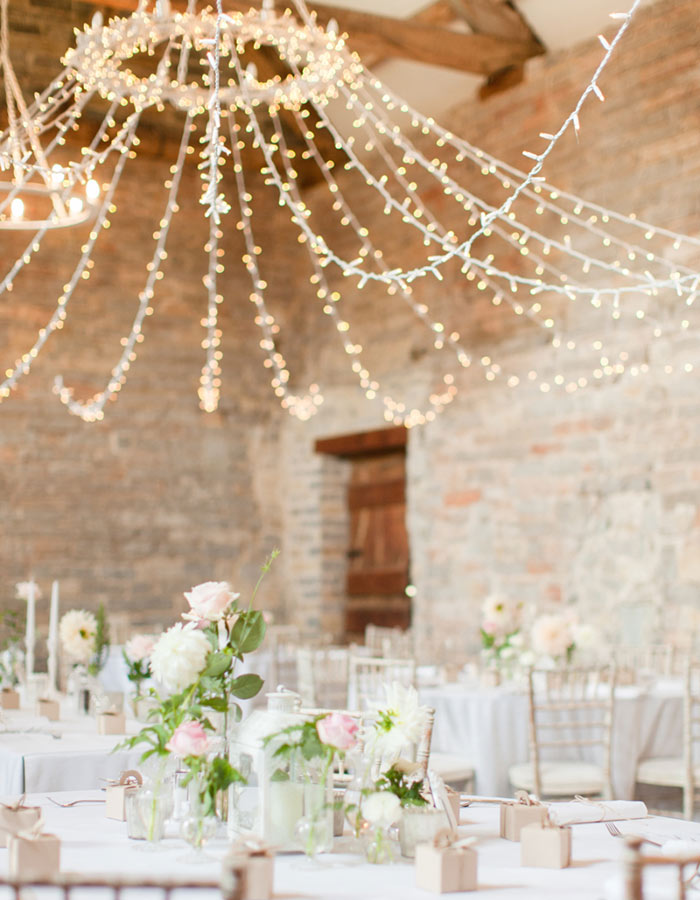 Or maybe a coffee shop and retail boutique where I could sell really cool vintage wares? 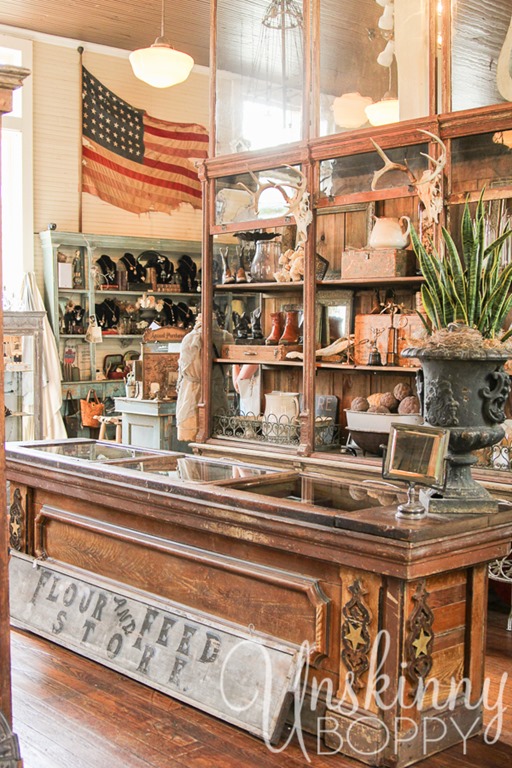 And the window displays I could create inside these gorgeous old storefront windows?  I die just thinking about it. 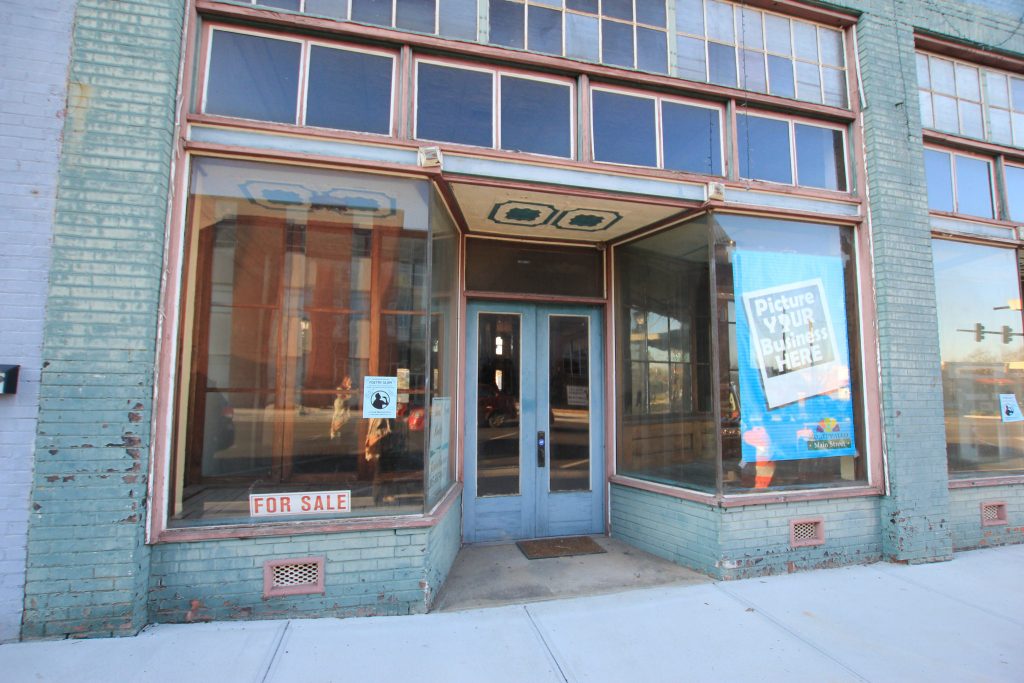 My inner Anglo/Franco/Euro-phile was giddy at the thought of transforming this facade into something straight out of the streets of Paris or London.

In my mind, I was already planting flowers in windowboxes and planning what witty sayings I could write in chalk on the signage out front. 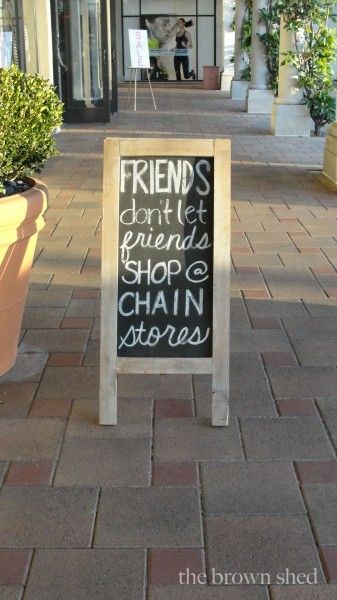 This photo of copper cladding on stair risers alone made me want to buy the building immediately just so I could pull off this look on the staircase in the middle. 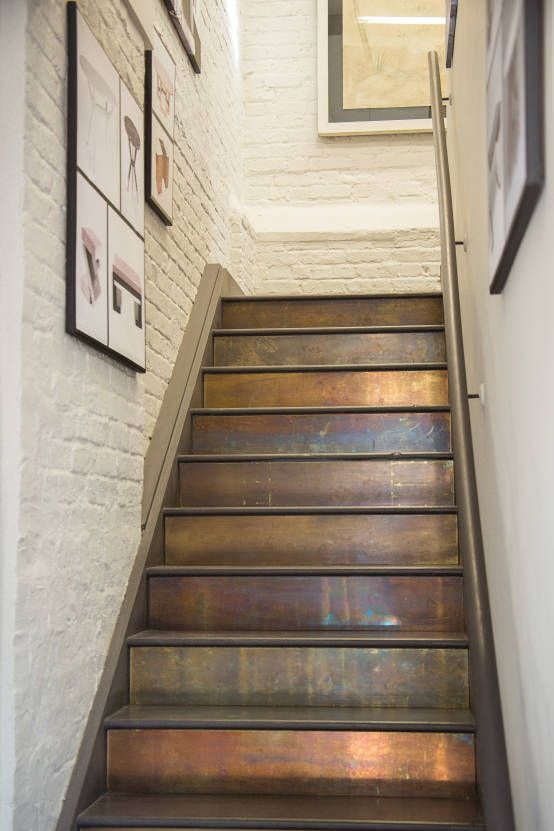 Source: Unknown (but if anyone does, please tell me so I can link it up and congratulate them on making me drool.)

I’m telling y’all, I was OBSESSED with this building for a full three months of my life. I drafted a proposal and went to a banker to take out a business loan so that I could begin my dream of owning a brick-and-mortar. And he said YES, y’all. He was really going to give me the loan and he even said my idea was a good one.

I called my Realtor and was prepared to make an offer.

Then, I had a two-hour long phone conversation with the local building inspector about what exactly was needed to bring the building up to code. He was a super nice guy and he was really on my side, willing to help me every step of the way. But the more he talked, the more I realized that I was about to drop some serious cash into this building. Everything he said added thousands more dollars to my proposed budget, and all I could hear was “CHA-CHING, CHA-CHING” with every new revelation.

It was a crushing blow, but I knew after that conversation that I was getting in way over my head. There was simply no way that I, as a middle-income mom of a two-year-old and a ten-year-old, could afford to take on a project this big. Maybe if my kids were older or if I was financially independent, then yes, I would have jumped on it in a heartbeat. But the reality is I am not equipped for something of that magnitude.

I had to walk away.

Perhaps if I had not been so ambivalent about the purpose of the building, I would have stayed the course. If I had a lifelong dream of opening a store that sold jewelry boxes made out of seashells, then maybe I would have fought harder to make it happen. But the truth is I still have no idea what I would have done with that big old space besides pour money into it and blog about the process.

I am a firm believer that things always work out for the best. When God shuts a door, He opens a window. I have first-hand experience with this little slogan, so I am trusting that my decision was a good one. In fact, just this week, some other Big Changes have happened in our lives that made us VERY thankful that we didn’t buy that building.

I have no regrets.

Have you ever been faced with a major decision like this and been forced to walk away? It is an incredibly hard thing to do, but I’m thankful for the opportunity and experiences it gave me. I never imagined myself sitting across the desk from a banker to ask for a large business loan and hearing him say “Yes”, but I totally did it. That alone gives me hope that one day another opportunity might come along when I am more prepared to take it. Maybe one day I will know without a doubt that something like this is the right choice for me and my family.

Unfortunately, that time is not now.

Maybe if I salvage some sheets of weathered copper cladding and DIYed that amazing staircase at my house I will feel better.  Whatcha think?