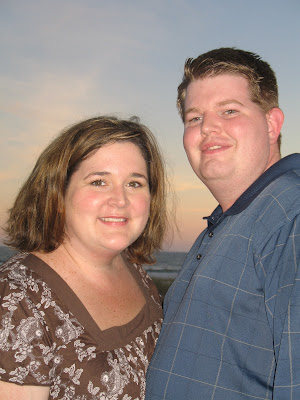 Yesterday J and I returned from a long weekend in Florida where we celebrated our four year wedding anniversary on October 16th. We drove down to Santa Rosa Beach on Thursday and left Garrett behind with the grandparents. He stayed at my mom’s house one night and J’s parent’s house for two nights. We are so thankful to them for letting us have some alone time and reconnect. J hasn’t had a real vacation in over a year, so this was a big deal for him to get away. 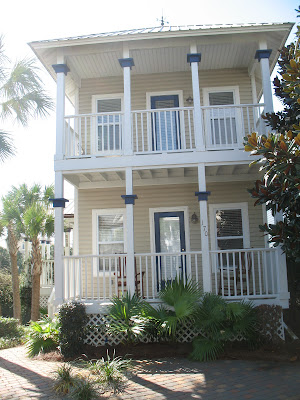 We arrived Thursday afternoon and found the beach house that we had rented in Santa Rosa Beach. It was right off of Scenic 30-A, which is very quiet and secluded this time of year. When you stepped out of the master bedroom doors there was a hammock where you could watch the ocean and listen to the waves and feel the breeze. Heavenly. After we got unloaded and settled in, we decided to venture out for some dinner. The obvious choice for our anniversary dinner was Red Bar, my favorite restaurant in the entire world. 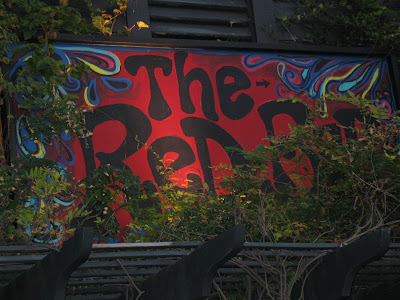 My sister introduced me to Red Bar many years ago. I think the first time I went was in 2001 with my friend Laura. I spent two New Year’s Eves at Red Bar and had some fun times with friends at bonfires on the beach behind it. Grayton is one of the few places along the Gulf where you can get a permit from the Sheriff’s Dept and actually drive out on the beach with 4 wheel drive. Definitely go check it out if you ever get the chance. The crabcakes and Panne Chicken are not to be missed. Unfortunately I made the mistake of trying something different this time. I got the blackened grouper, and while it was still good, it does not compare to the Panne Chicken with lemon caper sauce and mashed potatoes. Here is a pic of my blackened grouper: 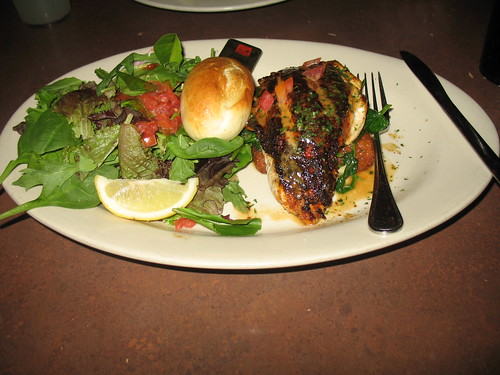 We watched the sunset on the beach behind Red Bar, a sunset so beautiful I almost started clapping as it sank into the ocean. 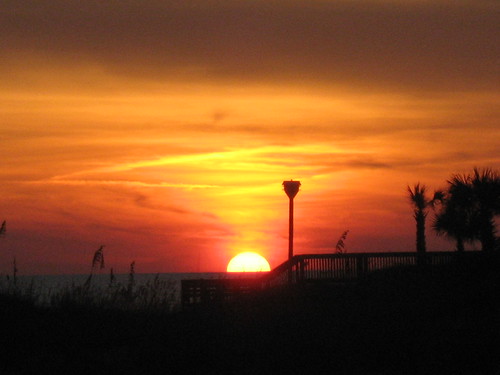 The rest of that night was spent lounging in the hammock on the porch of the beach house, watching the near full moon rise and listening to the surf. It was a perfect night, and I’m so thankful we got to have a nice peaceful anniversary alone together. I fell asleep by 9:00 pm, looking forward to a long baby-free night of uninterrupted sleep.

Sometime around 3:30 am we were awakened by the sound of noises on the patio. At first it sounded like someone walking around on the deck, and I whispered to J to make sure he was awake, too. He was, so we layed there in the darkness and tried to decide whether to call 911 or not. After just a minute or two I decided that the sounds we were hearing were not human, but they were coming from under the house near the hot tub. J got up and turned on the outside porch lights, and a big fat racoon came running out from under the deck. I guess he wanted to take a soak in the jacuzzi or something. We were too ambitious in thinking that we could get a full uninterrupted night’s sleep away from Garrett.

The next morning we decided to go for a swim in the ocean and spend some time lounging on the beach. We headed down to the water where I got some nice shots of the dunes overlooking the waves. 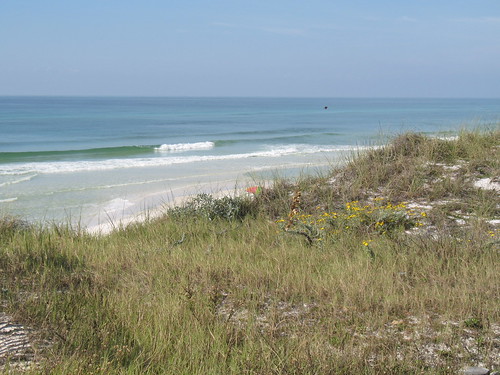 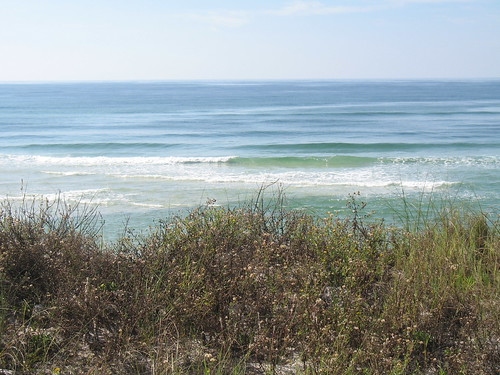 The beach was nearly deserted, with just a few families there during this time of year. 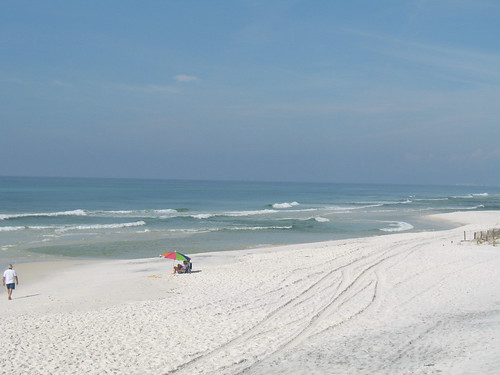 It was 80 degrees outside and the water was cold at first, but we quickly got used to it. The waves were perfect. Enough to have a little fun but not so much to make you feel like the undercurrent was going to drag you away. 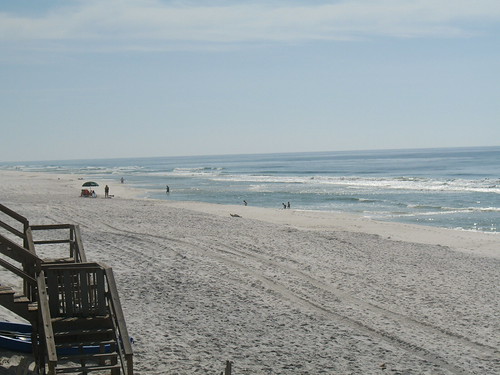 We waded out to the second sandbar and swam around for a while. J found a few big seashells along the way. I saw some minnows around my legs, which was no big deal at first. Then something bigger than a minnow bumped into my leg and I was ready to get back to shore. As we waded back I turned around to look, and right where we had been standing was a school of big fish. When I say big fish, I mean they were probably about nine to twelve inches long. J laughed at me and said the water was magnifying their size, but with each wave that lifted them up in the air I could see that those fish were not something I wanted schooling around me. They were eating the minnows, and I didn’t wait around to see what might want to eat them. They were shark bait for sure, and I didn’t want to be anywhere near them.

So, we headed back up to the beach where I spotted a nice piece of driftwood. Ain’t it purty? 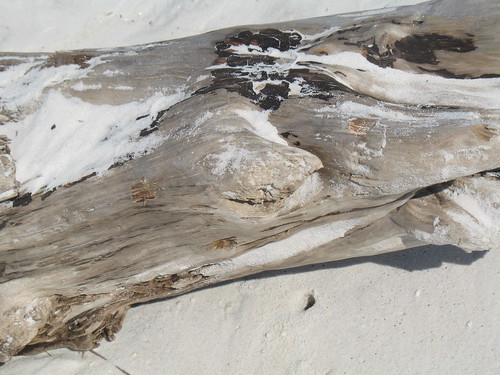 We chilled out on the beach until about noon when our stomach’s said it was time to find some lunch.

We drove down to The Back Porch in Destin for grouper sandwiches and hushpuppies and corn on the cob eaten by an open window right on the beach. I’m drooling just thinking about it. It’s another must-do on my list of places to eat in Destin. After lunch we went to the Silver Sands Outlet mall to do some shopping. We hit up the Carter’s and Children’s Place outlets and bought G enough clothes to last him until he starts kindergarten. I scored some great deals at Children’s Place, getting him polo shirts for $1.00 each! We also hit up a few other stores and filled our backseat with goodies for G from KB Toys. I drooled over the knives and dutch ovens in the Le Creuset outlet while J got some much needed pairs of shoes for work, and then we bought some lotions for my mother-in-law at the Crabtree and Evelyn outlet. I topped the afternoon off with a cookie from Mrs. Fields and we headed back to the house for a mini catnap before our big evening plans.

Friday night we had booked a dinner cruise aboard the Solaris by Sunquest Cruises. The instructions said the boat left from Sandestin Bayside at 6:55 pm so we headed out around 6:15 pm. We arrived at Sandestin at 6:30, but after driving around for 20 minutes with no luck in finding a parking spot I was beginning to get anxious. I finally parked illegally and we hurried down the long dock with just minutes to spare. We got seated at our table, and were told that dinner would be served in 45 minutes.

We ordered drinks and decided to wander around the boat and see upper deck. Turns out that a storm was blowing in, and it started to rain just as we climbed the stairs to the uncovered upper deck. The temperature was also dropping fast, and it was right around 60 degrees at sunset. So we turned around and headed back inside where it was a bit warmer. We went to visit the Captain’s Quarters where we watched him try to maneuver the big boat away from the dock and into the winds of the storm that was blowing in. He was hanging out the window with what was essentially a giant Atari joystick controlling the boats movements. I had no idea one could drive a yacht with a joystick just like playing River Raid.

As it turns out, the wind from the storm was too strong to get the boat turned around, so the Captain just parked us right back up against the dock and headed downstairs to get a cup of coffee. It looked like we weren’t going anywhere for a while, so I pretended to be Captain at the helm, with a strawberry dacquiri in place of the joystick. 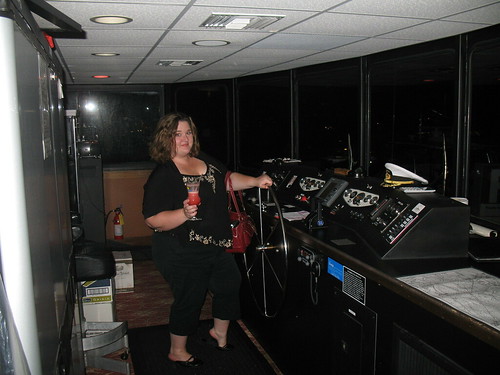 Then we tried to snap a photo of the wind and rain that was driving in the window of the boat but we just wound up looking like drowned rats. I have no idea what J is looking at in this photo. 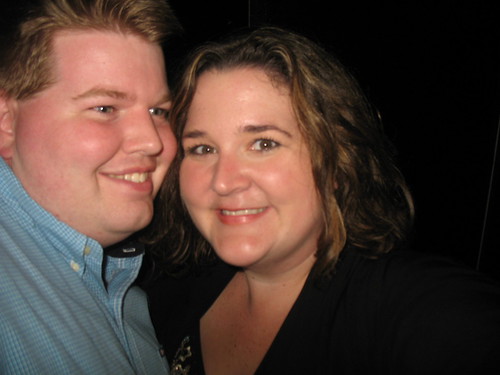 Finally dinner was served, so we went back downstairs to eat our meal as we rocked and rolled up and down in the waves. The storm was blowing white caps on the bay, but at least we were still tied up to the boat dock so we could swim to safety if the boat started sinking.

While we had dinner we suffered through some live music by a man and a woman with two turntables and a microphone. Actually it was two microphones and a tape player karaoke machine with a little guitar thrown in for effect. Now don’t get me wrong, I’m not a tape player hater, but these poor folks really sucked. They were worse singers than George from the Wedding Singer. They mostly sang Jimmy Buffet songs and a lot of one hit wonders from the 80’s. I didn’t have a lighter, so I used the battery powered fake flame to sway to the music when they started singing Sweet Home Alabama. I was disappointed that they didn’t sing Freebird. 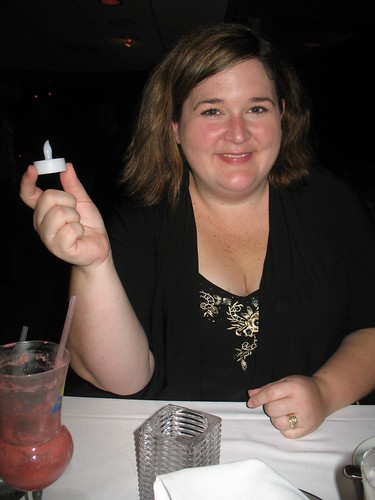 But then toward the end of the evening the dude busted out with something even better than Freebird. He started singing Flo Rida and I nearly squirted my strawberry dacquiri out my nose. I remembered my video camera setting on my camera just in time to catch the end of it for your viewing pleasure. Please enjoy this little musical interlude. I know Flo Rida sure would if he heard it:

White people at their finest. Ahhhh, good times were had by all.

The storm broke just in time for us to get about an hour worth of sailing around the Choctawhatchee Bay. We made it up to the Mid-Bay Bridge and back in no time it seemed.

We went home that night and crashed after our long night of dinner cruisin’ with the blue hairs.

The next morning we awoke to a beautiful sunrise. Here was the view right out the french doors in our bedroom. 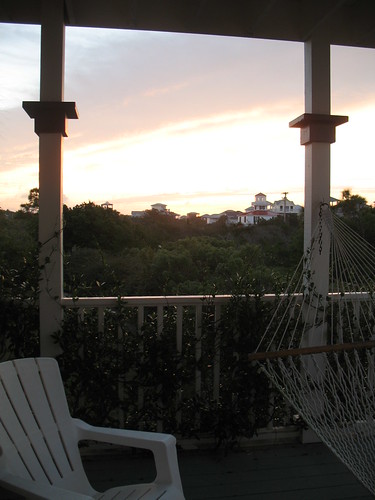 I stayed awake long enough to snap these sunrise photos, then I crawled back in the bed for 2 more hours of high quality baby-free sleep. 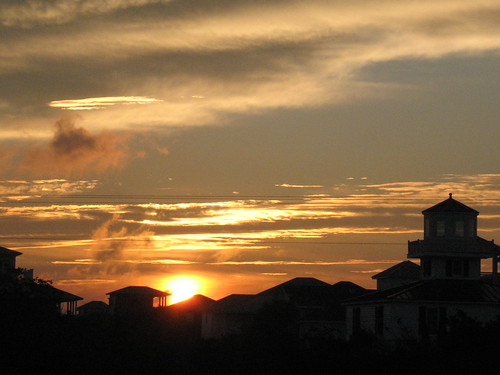 Saturday was spent doing more shopping all along the small towns of 30-A. Watercolor, Seaside, and Rosemary Beach all have great shops to browse. Seaside is where the movie The Truman Show was filmed.

I bought more souveniers, and found these great little seashell trinket ball things for my house. 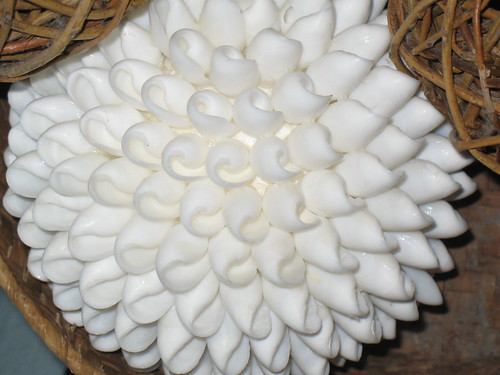 After shopping along 30-A we headed over to Panama City Beach to visit some friends who were in town for a church event. Panama City has changed very little since I was there for college Spring Break. A few new condos stand where old seedy ones have been torn down. Other than that, it’s still just PCB.

J and I ate dinner Saturday night at Pandoras at Grayton Corners. We were all fished out and had officially eaten our fill of seafood, so we decided to go there for a steak. It was DEEEE-licious. Absolutely perfection in a steak. I would go back to Pandora’s again just for the filet.

Sunday we woke up and decided to head on back home and rescue the grandparents from a weekend of baby duty.

It was a great weekend, but I’m glad to be home a kiss on my sweet baby G. Maybe we’ll do it again next year, minus the apple bottom jeans and the boots with the fur on the dinner cruise.

Cold weather ahead! Y'all ready?