Anyone know that Merle Haggard song? It pretty much sums up my life right now (and many previous Decembers of my life, actually). It’s a running joke in my family that if we make it through December, everything’s gonna be alright.

So much is going on right now that I don’t have time to update here regularly at all. I’ve been served up a nice little sore throat with side of fever that makes me feel lovely. I was bragging about my Watkins Rezist Plus last week at a vendor booth and apparently I forgot to knock on some wood. Garrett is battling an ear infection– his first one since the tubes were put in back in February. I’m glad he made it so long without one but I hate to see him in pain now. The antibiotics that he was prescribed hurt his stomach, so we’ve also been battling other unspoken messes around here. This morning I woke up to find Garrett in his crib with an exploding diaper. You wanna know what’s grosser than gross? Well I found out this morning. And believe me, you really don’t wanna know.

We are leaving soon for a Caribbean cruise with our family and some extended family. That’s right, innernets…. I just announced to the world that our house will be empty while we are cruising. But take heed, all you Joe Pesci-esque robbers: Gus and Woodrow will be Home Alone. They are armed with two inch long unclipped nails and gigantic slobbery tongues and possibly some Busy Bones, depending on how fast you get here. Proceed with caution.

I am in no way prepared for this cruise. I feel like such a slacker for not being more pro-active with the packing and organizing and obsessing over what to wear like normal women would. I figure I’ll take 4 outfits and wash it all halfway through the trip and re-wear it all again just to keep my suitcase light. Garrett’s suitcase(s) will be huge enough without adding unnecessary crap on my end. I mean, the kid can’t live without his choochoo train addiction. I’ll probably wind up disassembling his entire train table and setting it all back up inside the cruise ship cabin. I’m telling yall, trains are like crack for this kid.

I’ve got a to-do list a mile long and my brain is so scattered right now that I sent Garrett to school yesterday without any shoes on his feet. In 37 degree weather. Yes, I am mother of the year. I have done this before, but he was just a little baby back then… not even walking hardly. Nowadays shoes are much more important. And I totally ran out of the house without thinking twice about them. He was wearing socks, but halfway to school he yelled “SHOES!” and I realized we had forgotten them. So I took him to school barefooted, dropped him off, and went straight to Walmart and bought him a spare pair to keep in the car.

Since I have no photos to share in this post that you’d want to see…. let me show you this big ass bug that I saw in the school parking lot on my way inside to drop off the his new shoes: 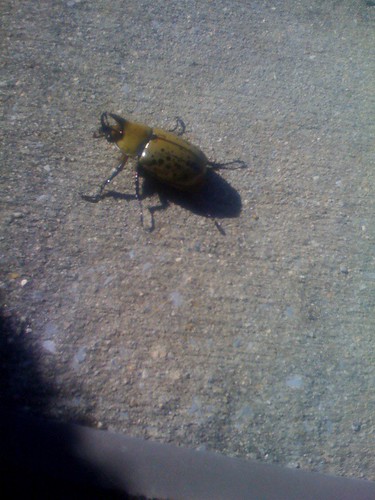 CAN YOU BELIEVE THE SIZE OF THAT SUCKER!?!? For reference sake, I put G’s new size 8 toddler shoe down beside it just to show you all how freakishly large this thing was. I googled it when I got home and found out it was a Rhinocerous beetle. Here’s an interesting fact: It’s the strongest critter on earth, able to carry up to 850 times it’s weight on it’s back!! How awesome is that? 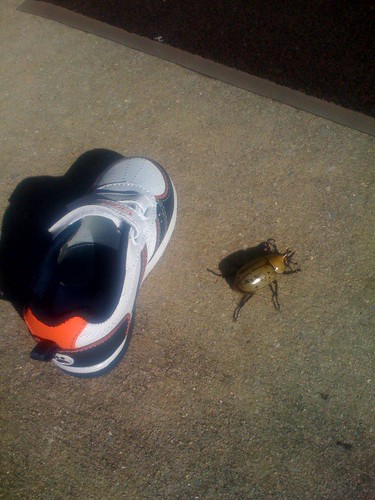 I need to take some lessons from this beetle. I sure feel like my load is that heavy some days, but I’m not doing a very good job of carrying it all.