So much for those monthly updates that I promised y’all when G was a wee little newborn, huh?

I did pretty well for the first 12 months, but then months 12-14 have been verrrrry quiet around the old blog. Sorry bout that. I have a little Mafia Wars and facebook addiction that I’m dealing with. Plus there’s that whole unlucky #13 thing. If elevators can skip the 13th floor surely I can skip the 13th month of blogging, right? Sure I can.

It’s a shame, because so much has happened that I can hardly remember it all now. Maybe I should go back and read my facebook status updates and just post all of those. But they don’t include photos and stories that go along with them so that’s no fun.

Lets see if I can at least hit the highlights. Starting with the most recent big event– EAR TUBES!!

Garrett got tubes in his ears last week. Big relief considering he has had one continuous ear infection since last October (and possibly before). I was pretty nervous about the surgery since he had to be put to sleep, but it happened so quickly that I really had nothing to fear. G did so great, and we were so relieved when the doctor came in about 10 minutes after he left us to say he was already in recovery. 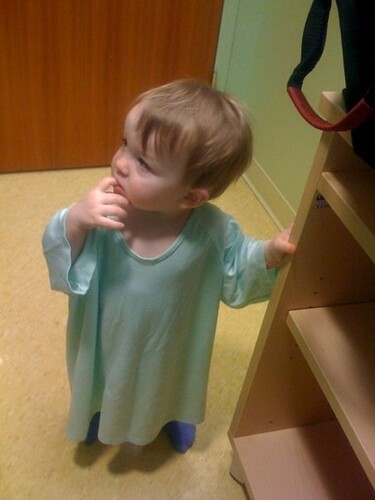 I know the tubes are helping because his ears have leaked some grody stuff that nobody outside the medical field should ever be subjected to seeing. I will leave all of that to your imagination and instead show you this adorable photo of him in his little baby hospital gown instead. 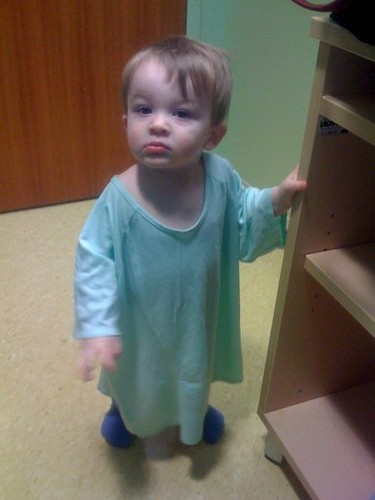 Doesn’t that just make you want to CRY at how pitifully sweet that is??

The good news is, he has been happier than ever since the surgery. Hallelujah!! Well worth the 15 minutes of worry to alleviate months of pain and antibiotics. 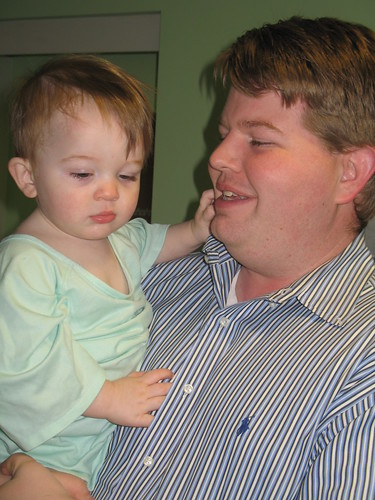 “Can’t a baby get some modest gowns around here?” 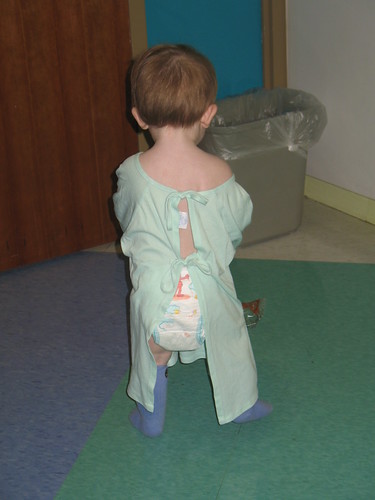 The doctor gave us the all-clear to swim in chlorinated water, which is great considering G loves the pool. 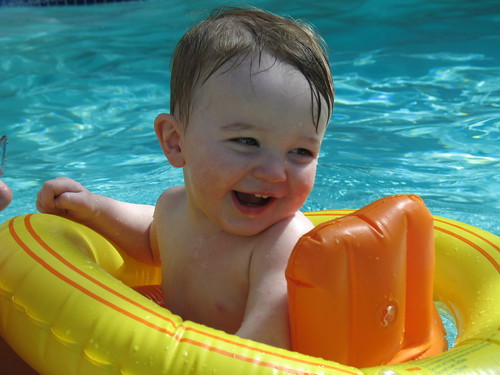 He is all about some water, so hopefully there will be a whole lot more of this in the coming months. 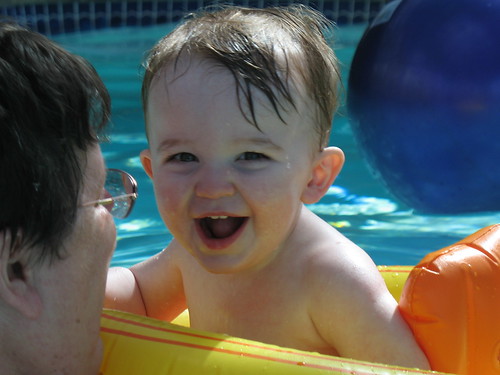 We took those swimming photos exactly one week after we took this photo: 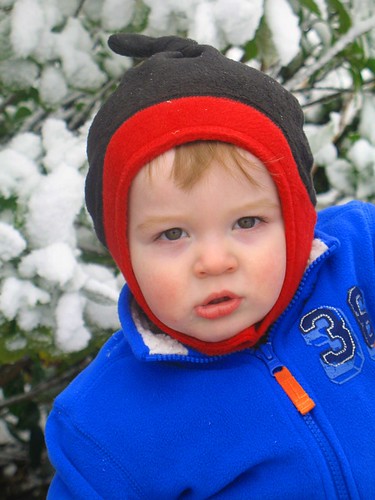 That’s right! On March 1st Garrett saw his first snow!! From snow to swimming in one week. Can you believe that? 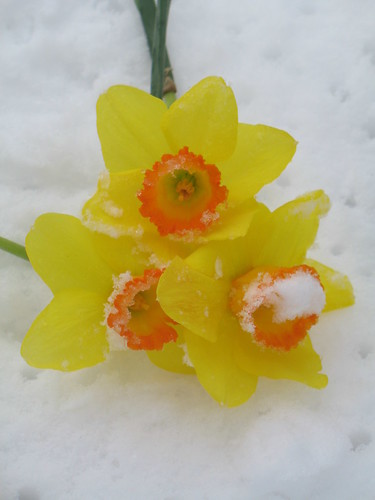 Garrett wasn’t too sure about the white stuff, either. 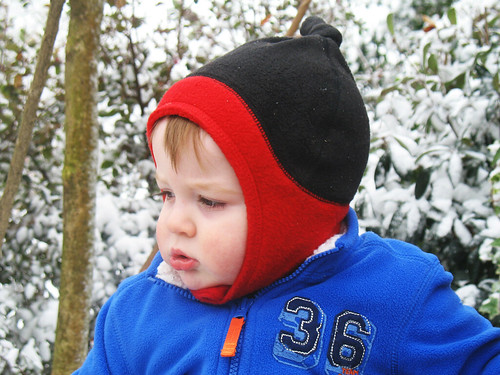 But maybe that had something to do with the fact that I had him dressed in 19 layers of clothes. 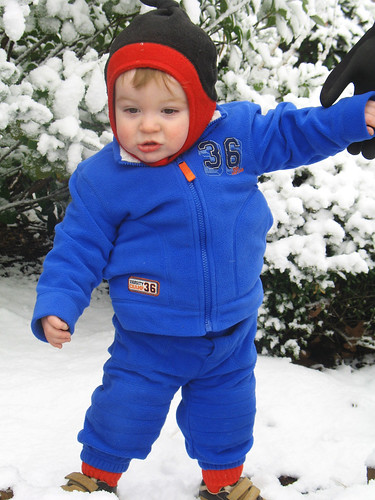 “HAAAAAAAAALPPPPPPPPPP! Somebody get me out of this freezing white tundra!” 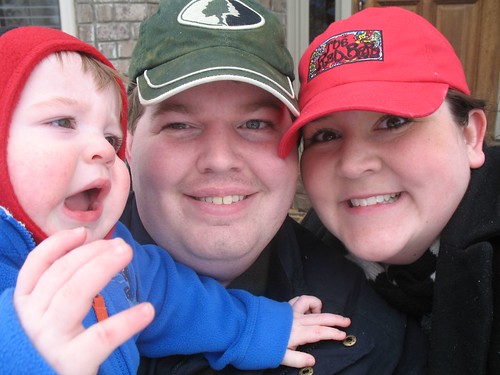 So we put Garrett down for a nap and went back outside to frolic in the snow like two kids. We made the creepiest snowman EVAH! He looked like an alien Elvis. 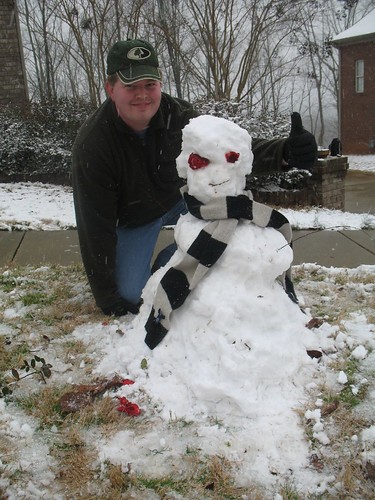 We got about 4 inches of snow that day, then the sun came out and it all melted into a mucky mess. But it was beautiful while it lasted. 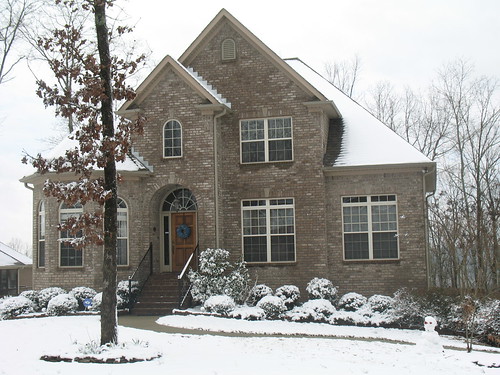 The day it snowed we had scheduled a follow up photo session with Sam Furgeson at His Hands Photographs. We had to reschedule it for the next weekend, and this time we went down to Montevallo and walked around campus. 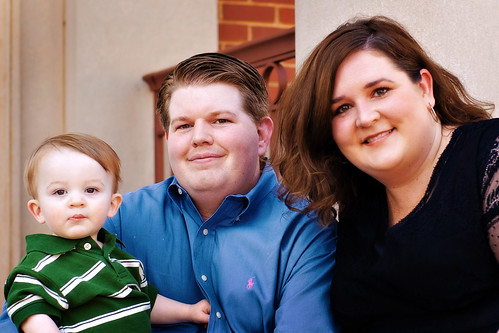 G was not in any better mood this time around than he was for the last photo session. We should have waited until after he got the tubes put in to have this second session. He’s so much happier now, it’s like a different kid. 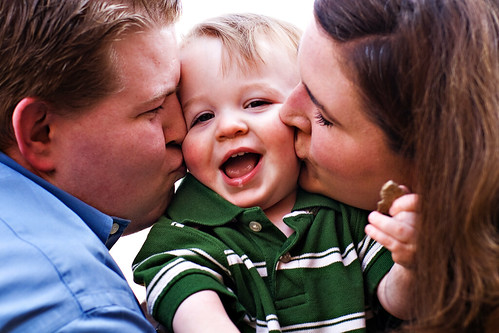 Even with him in a foul mood she still got some really great family shots. 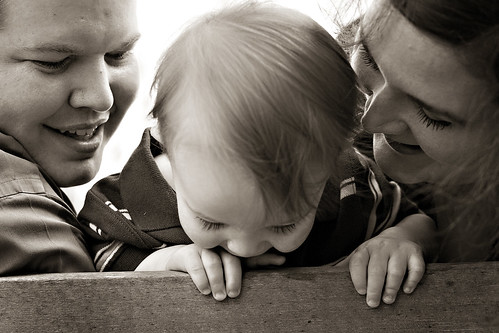 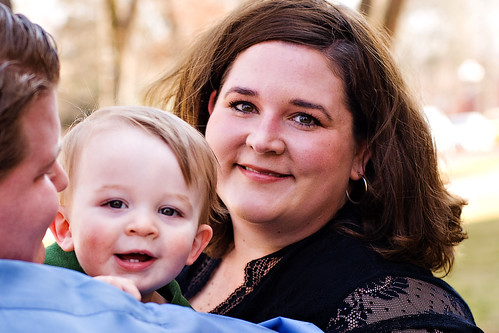 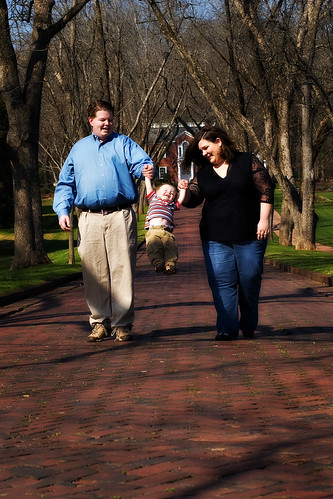 That last one is my favorite, since it’s like The Bryans We Be 2.0 version of this one from our bridal portrait session with Emanual Neiconi back in 2004. 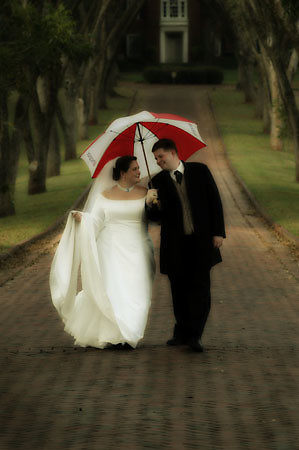 He is an old pro at walking now, which is great news for me. He can toddle around the house and happily explore everything which keeps him occupied while I get other things done.

He still hasn’t mastered the whole talking thing, but I really believe a lot of that had to do with his ear infections. He babbles non-stop but up until this week there have not been any true words that I was sure he used in the right context consistently. They did a hearing evaluation before his surgery and determined that he had some temporary hearing loss. We have a followup appointment at the end of this month to make sure he regains all of his hearing. But that alone is enough to make him have a speech delay, I believe. So we are working on repeating words over and over and over again and hoping to hear his vocabulary start picking up soon. In less than a week since he got the tubes he is already starting to say more words.

He looks at me and says “Mamamamamaamamamamamamama” and to J he says “Dadadadadadadadadadadaaddadadada” Once we lose about 15 syllables each it will be correct! He will get it eventually, I have no doubt. I feel confident that he is now saying “Bye Bye” because he waves as he is saying it. Also there is “Bah” for “ball” and I swear today he said “Woodrow and Gus” although it sounded more like “Goodrow” and “Wuss”, which are hilariously appropriate names for our two crazy dogs.

He has learned how to take his clothes off all by himself, which means we often find him half dressed in his crib after nap time. I’m dreading the day he learns how to remove his diaper and go commando during naps. 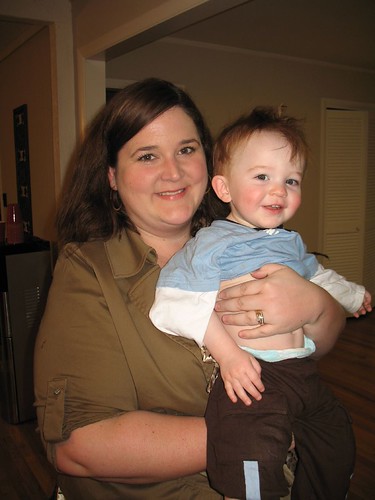 He is growing like a weed, already wearing size 18 month tops because his belly hangs out of his 12 month shirts like Britney Spears: The Post Partum Years. His poor little short legs are still in 12 month pants, though. I feel bad that he inherited my short stubby legs and Fred Flintstone feet. At his 12 month check up he weighed 25 lbs and was 31″ tall. He’s grown even more since then, and is starting to look more like a little boy and not a baby anymore.

I cannot believe how fast that happened.

Where has my baby boy gone?

« Hocking my wares
Get while the gettin’s good! »

« Hocking my wares • Get while the gettin’s good! »