G was spending the night at the inlaws last weekend so J and I went out to eat at a real sit-down place that doesn’t have the word “nugget” anywhere on the menu. After dinner we were in the movie theatre halfway through Up In The Air when I got a phone call from Papa. Garrett had fallen down on the hardwoods while running through the house and busted his chin open. I asked if he needed stitches and he said he didn’t think so but they couldn’t get the bleeding to stop. We left the movie halfway through to make a CVS run and bought all kinds of butterfly bandages and some of those paint-on liquid bandages.

When we got there Garrett was fine, reading a book and happy. Nana and Papa, however, were SO upset. They both got a little choked up telling us about it. I kept telling them it was fine… coulda happened anywhere but they were traumatized I think.

G wouldn’t let us near him with a bandage so I decided to use the paint on stuff. VERY BAD idea. I didn’t read before I applied but it is 6.7% alcohol. Yikes! Needless to say it was like I had squirted acid on his chin from his reaction.

But he calmed back down after a minute and finally went to sleep. We left him there and picked him up the next day. By two days later it was just a small scab that looked like this: 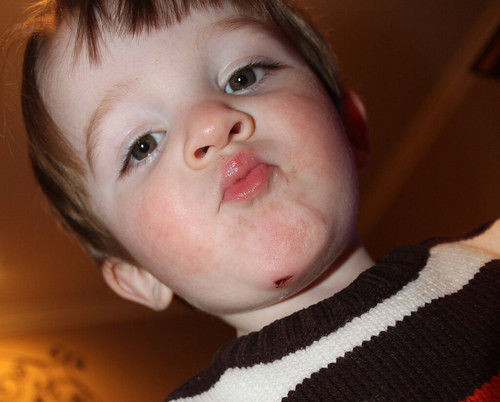 He keeps pointing to his chin and saying “Booboo hurt”.

Bless his heart. It’s tough being a clumsy little guy. At least his smoocher still works. 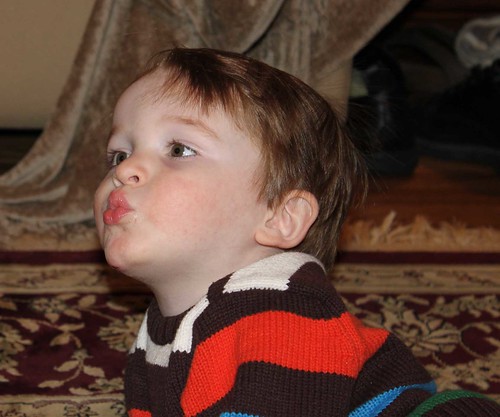 Now can anyone tell me how Up In The Air ends? I guess I’ll just have to add it to the Netflix queue.