Garrett turned two years old on February 1st. I know I’m beginning to sound like a broken record, but I CANNOT BELIEVE HOW FAST HE’S GROWING UP. Ok, now that we got that wailing and gnashing of teeth out of the way…. here are the party pics. Just two weeks late! Not bad, right?

We had his party inside of an old Amtrack train at the Heart of Dixie Railroad Museum. It was a super cool place to have a birthday party for a little boy who is completely obsessed with trains. 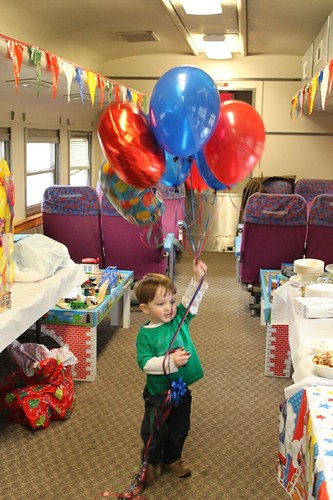 Since I ain’t skeered to totally rock out a good old fashioned theme party, I checked out my options for party decorations over at Oriental Trading and hit a motherload of Thomas the Train themed decorations. 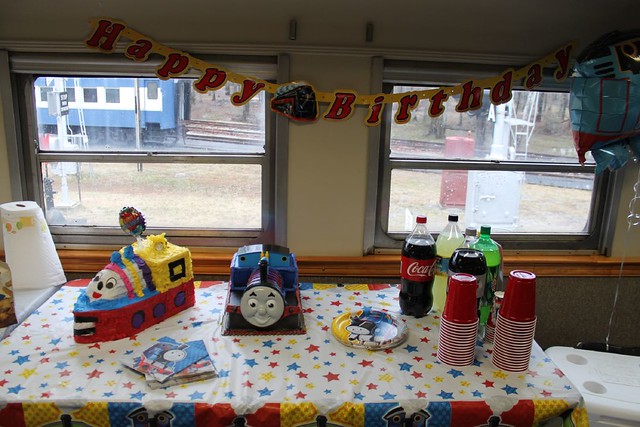 Then I scooted over to the Publix bakery and found this incredible Thomas the Train cake: 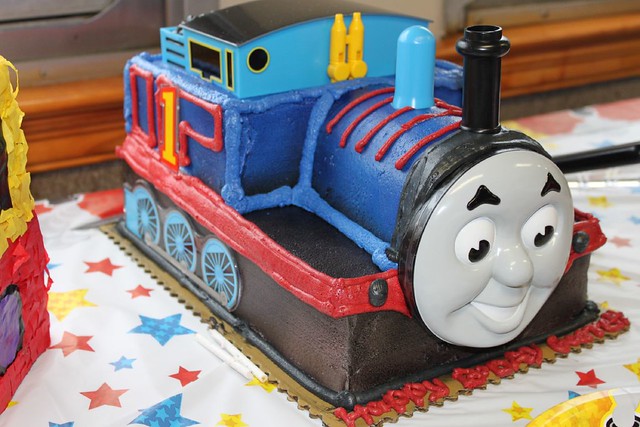 This sucker was HUGE! It was like the Daddy of the Mac Daddy of birthday cakes. At least two thirds of it is now sitting in my freezer waiting on a late night sweet tooth attack. If any of y’all want some please let me know and I’ll ship it out to you ASAP. Just be prepared for some freakishly colored teeth and gums and other unmentionable things when you eat that black and blue icing. Not for the faint of heart. 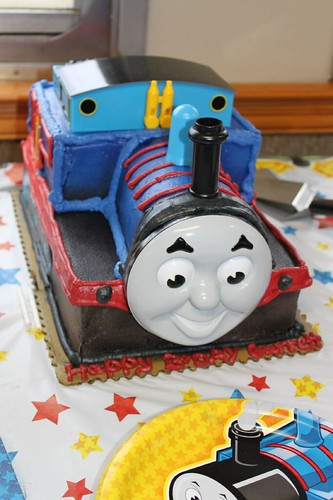 I picked up his customized birthday shirt from etsy seller Cantaloupe Corner. 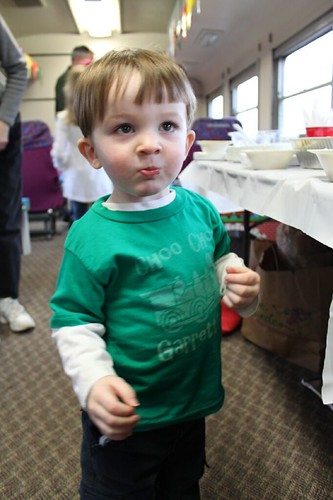 It said “Choo Choo Garrett’s 2!” with a picture of a train on it. I should have made a better picture of the shirt before I put it on him, but oh well… Live and learn. It was super cute on him!

This was more of a “show up and throw it all out on the table” kind of party. I figured since we were inside of an actual TRAIN that we didn’t require too much other entertainment. 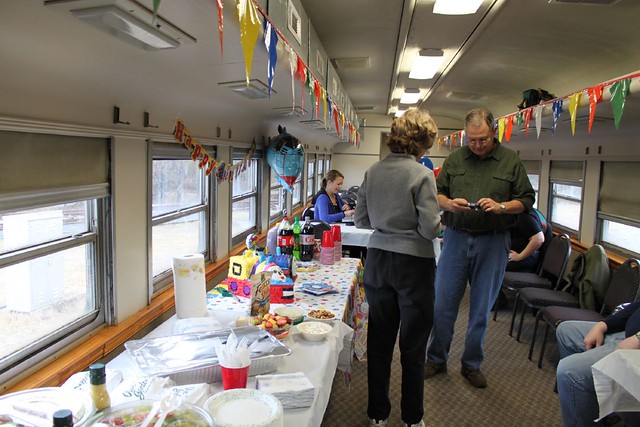 We had some kick ass lasagne from Joe’s Italian along with Olive Garden salad and breadsticks. The girl at Olive Garden told me that a jumbo salad would feed four people so I ordered three (because 3×4=12, right?) We were expecting 12 to 15 folks, so I figured three oughta do it.

Well, OG chick totally lied, because we wound up with enough salad to feed all the American AND Canadian Olympians.

Garrett did great with all the attention and gift opening. You just never know what you’re going to get at a toddler birthday party, but I was really impressed by how well he did. He played with his buddies while we ate lunch, then he opened ALL of his own gifts with just a little help getting each one started. 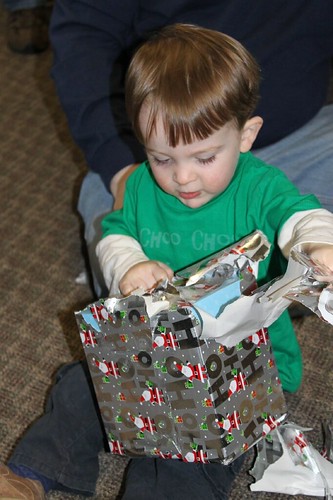 Notice that he racked up on Hot Wheels this year? I’m trying to steer him away from the train addiction. So far it’s kinda sorta not really working. After ripping into loads of presents he blew out both of his candles all by himself! (I’m making that “O” face but I promise I didn’t exhale.) 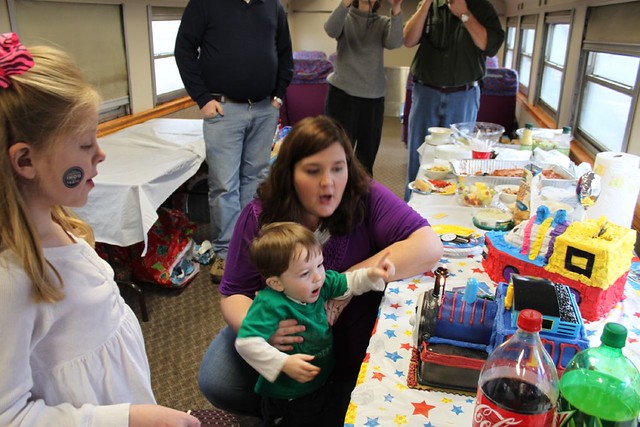 I couldn’t believe that he blew them both out with just a little bit of prompting. Way to go, my big boy!! I was so proud of him! 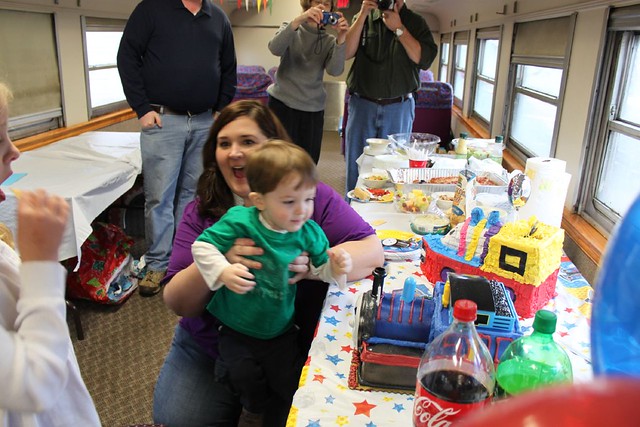 We didn’t do a cake smash this year, but he still dug in pretty good. He had two candles to lick this year. Yum! 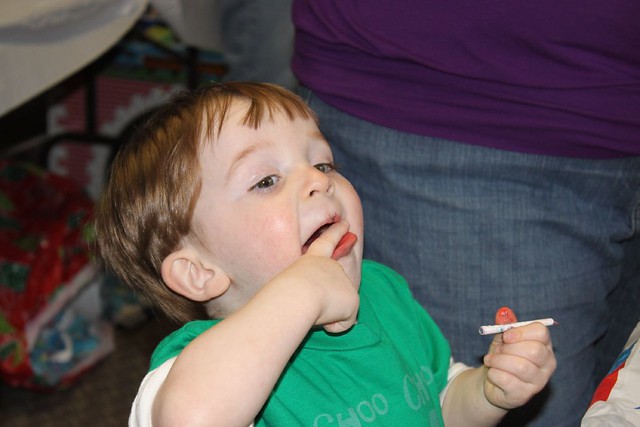 Instead of smearing cake all over his own face he smeared it all over Thomas’s face! Much easier for cleanup. 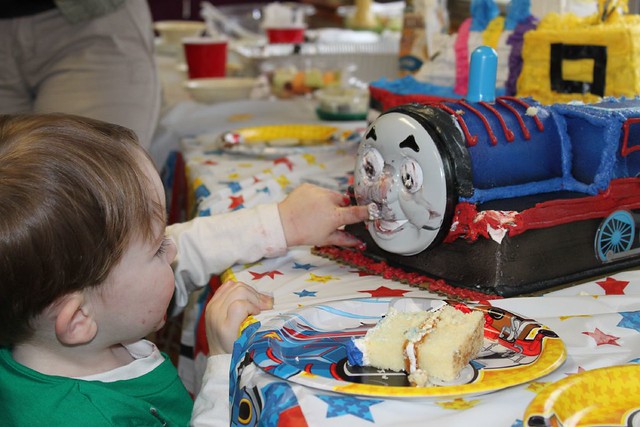 I think we have a Picasso on our hands. 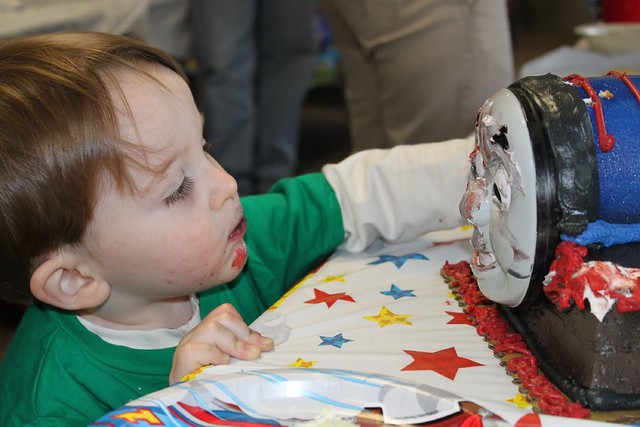 He still got it all over his new shirt, though. 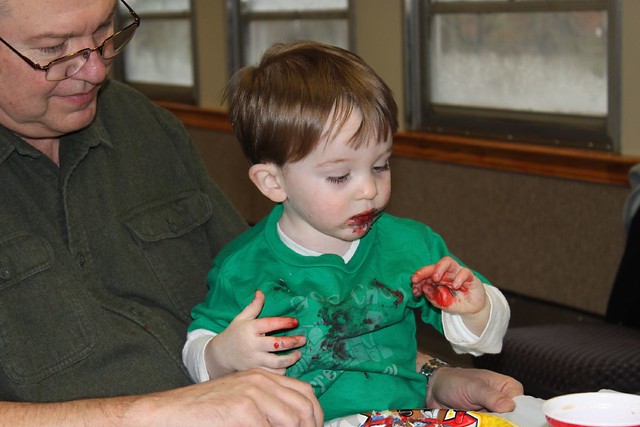 Papa let him go to town, and he chowed down on all that black, red and blue iced goodness. If you can believe it, I soaked that shirt in Shout and yesterday when I washed it the shirt came completely clean! And before you ask– yep, it took me two weeks to do laundry. what’s it to you? I’m like a geographical oddity these days. Two weeks from everywhere. 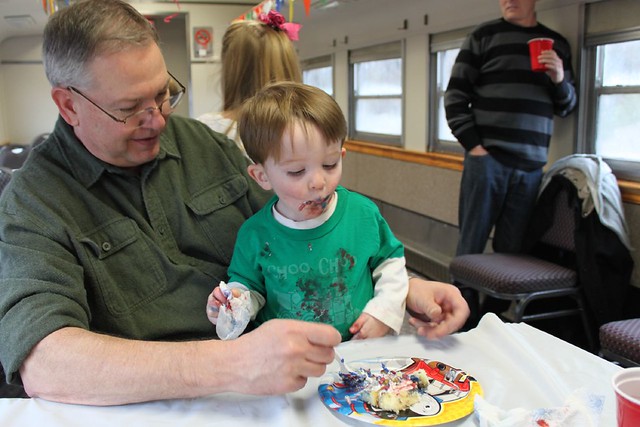 After cake was devoured we smashed a pinata with a stick horse that he got as a gift from Grandma. 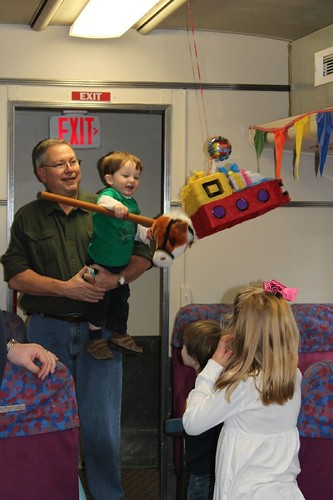 Garrett giggled and giggled at this thing. It might have been his favorite part of the whole day. 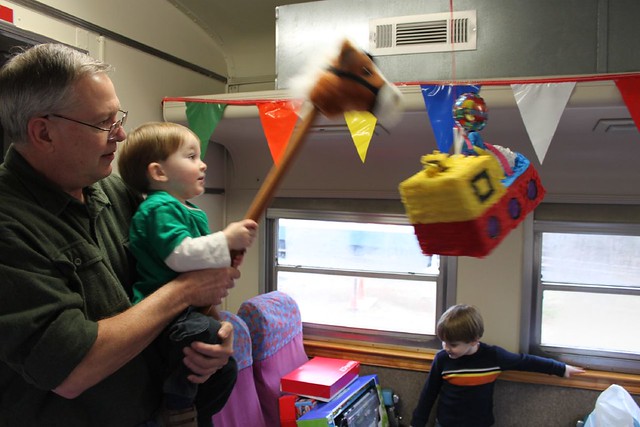 Or maybe it was the train table. Tough choice. 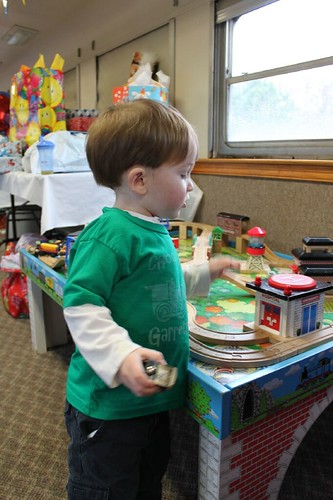 That cheap little pinata proved to be much stronger than the two year old, the four year old and the seven year old who spent a lot of time beating it with a stick horse. So finally my friend Lori and I ripped it open and gave it one final whack and all the candy flew out. They might be finding petrified Smarties underneath their furniture for a while.

Speaking of Lori, she decided to model the Thomas costume for us. Hilarious. 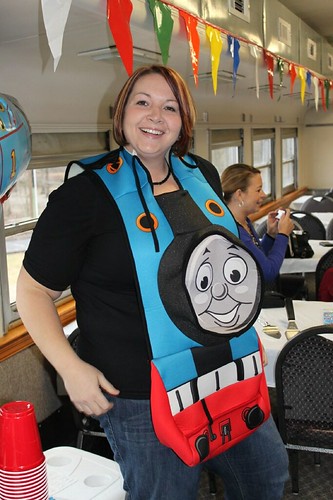 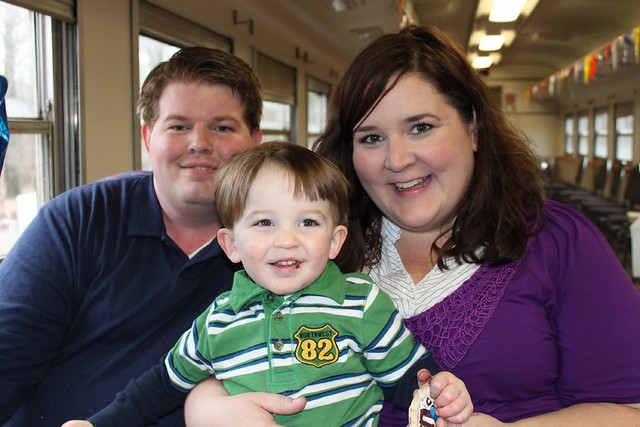 Yay for our big birthday boy!!

I love you so much Garrett!