What’s that saying about a person coming into your life for a reason, a season or a lifetime? You know the email that arrives in your inbox prefaced by Fw: FWD: FWD: FW: fwd: and you almost delete it but after reading it you are glad that you didn’t? Every once in a while a person comes along in life that you really connect with, truly bond with, and you become instant BFFs. It’s a rare event, and not one to take lightly. Recently I have been blessed beyond measure to have not one but NINETEEN of these women come into my life. I’m not sure if they are reasonal or seasonal, but I’m hoping to keep them around for a lifetime.

Last weekend half of them arrived on my doorstep, and I nearly passed out from the excitement. I mentioned how nervous and unprepared I was for their arrival in a previous post. By the time the weekend finally arrived I had let go of my jitters and was just overjoyed that they were all coming. Some of them I have met before, on more than one occasion, but two of them were first timers to me.

Kelly was one of the girls I had not met before. A therapist by trade but a crafty photographer at heart, Kelly has a gigantic smile and a bubbling personality. She drove in Thursday night along with Kent from Atlanta. Kent arrived first and helped me decorate my house for the surprise baby shower that we had planned for our friend Dusty. Kent also sat with me on my back porch blowing up a whole bag of balloons for a balloon drop that I hung from my foyer balcony. Yeah I might have gone a wee bit overboard for this shower. But talk about a once in a lifetime event! I couldn’t resist the opportunity. Thanks so much for your help, Peachypoo! After all the decorating was done, Kelly arrived and we all sat around grinning our heads off at each other. Then we went to bed to rest up for the big weekend ahead.

Friday morning we got up and headed to the airport to pick up Dusty who was the first to arrive. Of course I have no photos of her arrival! Aly drove in from Orlando (Like 10 hours with an overnight stop in Georgia. WHEW!) and met us at the airport. I also have no photos of that event. FAIL.

Instead I’ll show you our lunch at Zoes Kitchenin Homewood.

Yummmm… Dawn on a stick was drooling. 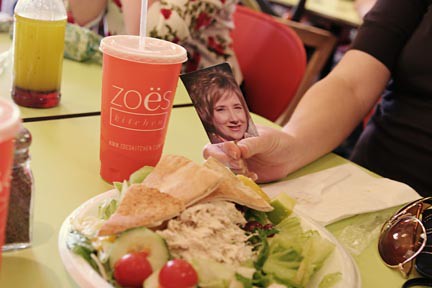 While we were at Zoes Natalie and Steph arrived from New Orleans. Steph is actually from Columbus, OH but flew into NOLA to ride up with Nat on her 5 hour drive, much like something I did back in March for the Dallas GTG. Gah, she’s such a copycat.

Here is the lunch crew for Friday. From Left to Right there is Natalie, Dusty, ME! (up top), Aly, Steph, Kent and Kelly. 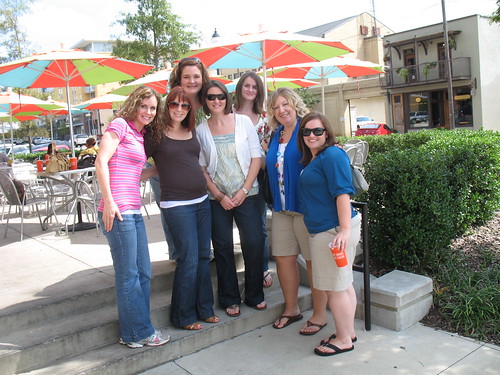 After lunch we wandered around Main Street in Homewood, checking out the shops and killing time until the next batch of ladies arrived at the airport.

We stumbled into the uber expensive maternity store, and we went buck wild with their fake bumps. 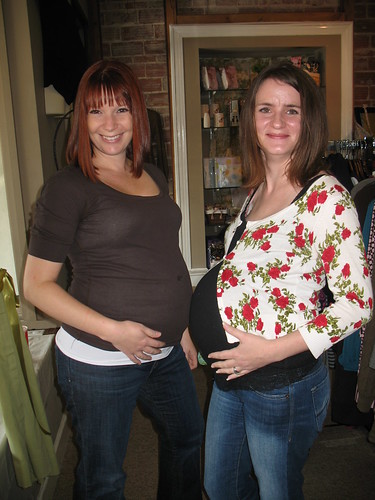 One of these is real. Can you spot the fakes? hehe 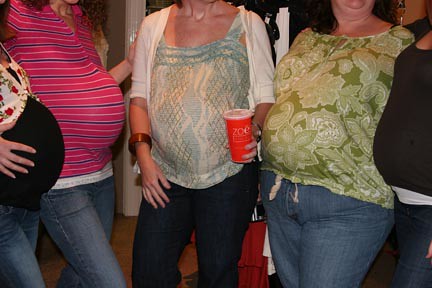 The owners of the maternity store were giving us some looks, but Aly gave them a message. 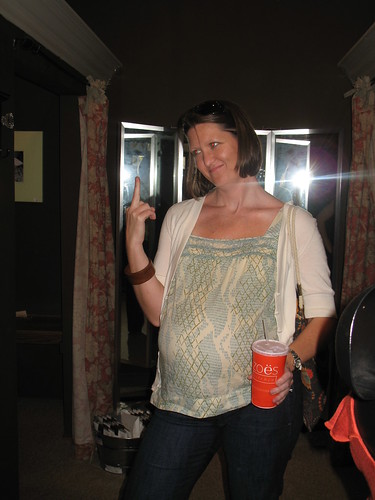 Or maybe this is a message to her husband Todd of what she will say to him if he ever accidentally knocks her up.

Either way, a pregnant Aly ain’t a happy Aly. 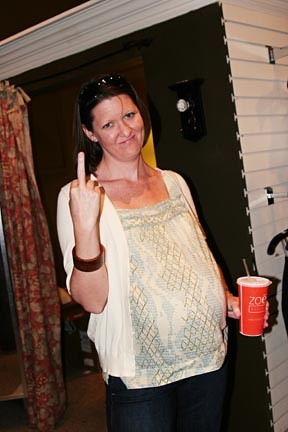 The real pregnant girl was VERY happy, though. Especially when she was practicing her baby-wearing with DOAS. Hotslings have never looked hotter, right? 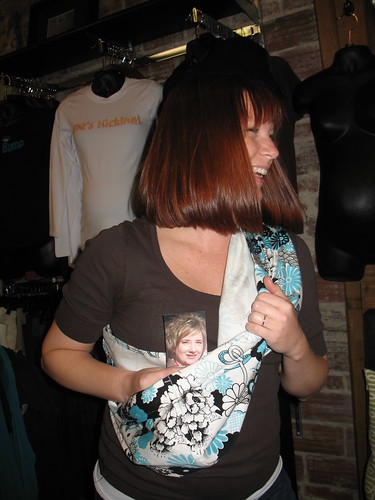 After we left the maternity store, we headed to Birmingham’s most recognized attraction. Vulcan is our local Roman god of fire and forge. 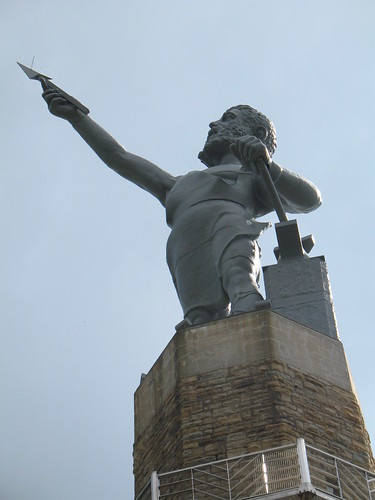 On the way to Vulcan Natalie got a phone call from her sister telling her that she was pregnant!!!! How cool is that? Congrats Nicolle! Anna will have someone besides her porcelain piggy bank to push around play with now! Yay! 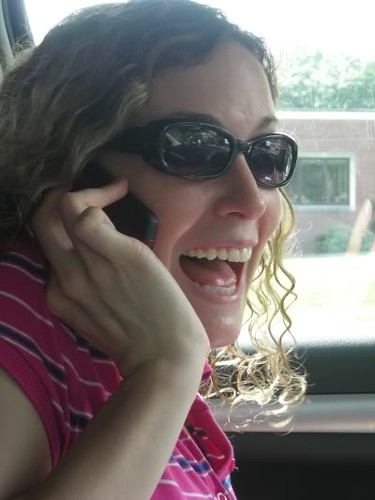 After we arrived at Vulcan we found out that it cost money to ride to the top, so we just wandered around the park. Here is your history fact of the day from www.visitvulcan.com:

Vulcan, Birmingham, Alabama’s colossal statue is the world’s largest cast iron statue and considered one of the most memorable works of civic art in the United States. Designed by Italian artist Giuseppe Moretti and cast from local iron in 1904, it has overlooked the urban landscape of Alabama’s largest city since the 1930s. 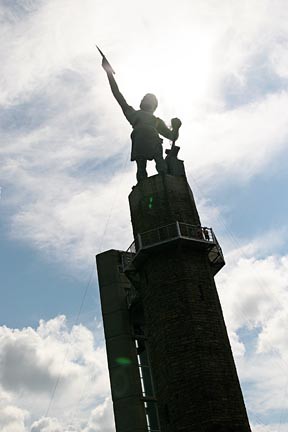 I just like him because he’s so bootylicious behind that loincloth. 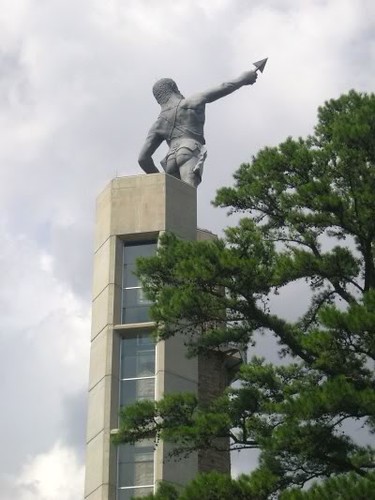 He also has a semi-decent view of the city, if all those pesky trees weren’t in the way. 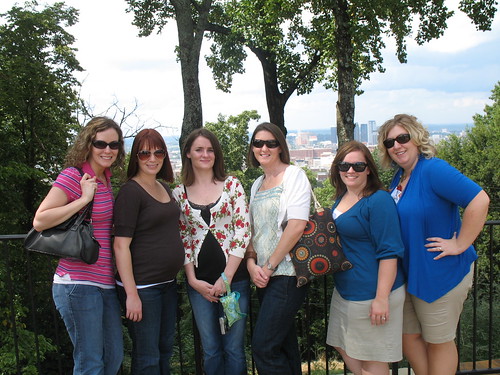 There we go, that’s better… 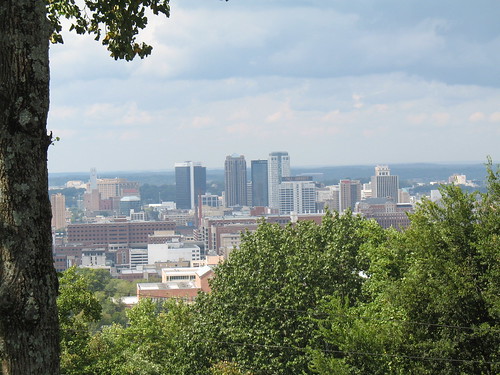 As we were leaving Vulcan Park Aly and Natalie decided to relive their youth and roll down the hills. 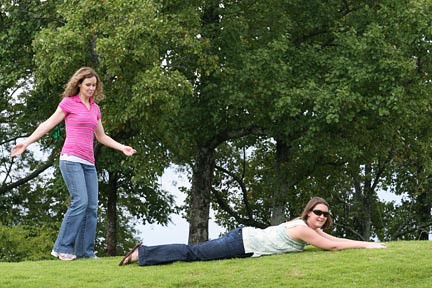 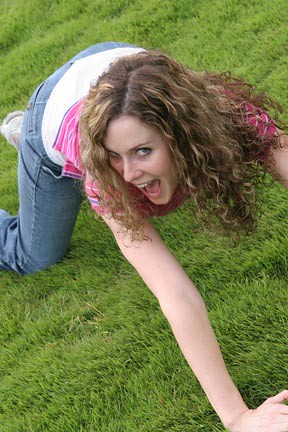 Here, I have video of it:

After that, we headed down to Pepper Place to peruse all the supah expensive interior stores.

We ransacked Atmosphere Essentials but the nice lady who worked there didn’t care. Neither did her dog. 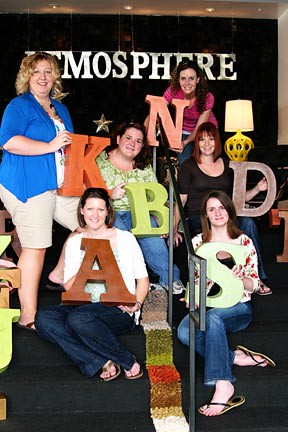 So we took a few more pics with her cool letters. 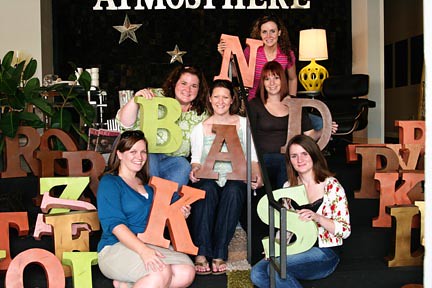 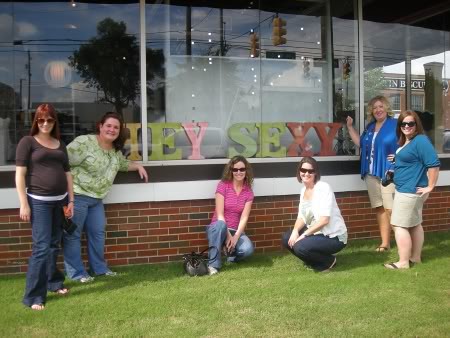 After that we headed back to the airport to pick up the rest of the crew. Allison arrived first. 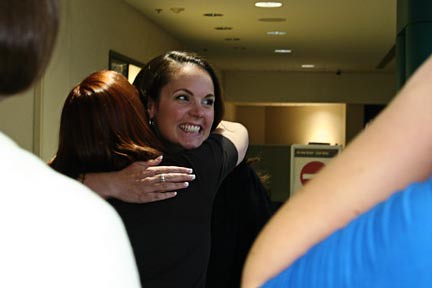 And then the one we had all been waiting for. I never in a million years thought I would actually meet this girl, the most private of us all. I’ve always known her as Merry, or merrygirl on the nest, so I will just call her that. Her real name is unimportant.

For a minute I thought she might hide in the airport bathroom for the entire GTG, but finally she came down the terminal. 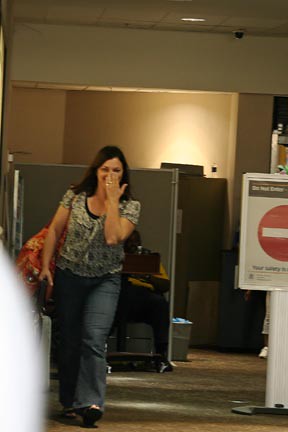 And here she is, live and in person and stunningly beautiful! 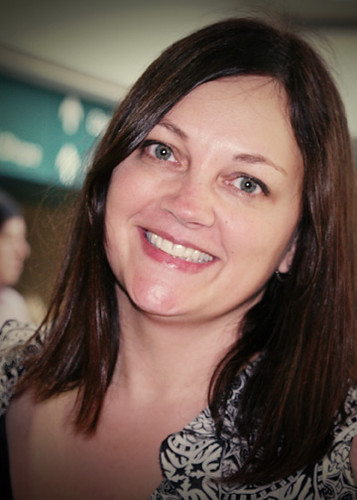 Words cannot describe how happy I was to finally meet this girl. She is the most kind hearted, lovely lady you will ever have the pleasure of knowing. And I’m SO glad she came to Birmingham!!!

After we all finished squealing like little school girls over finally meeting Merry, Emily arrived minutes later to complete the group. 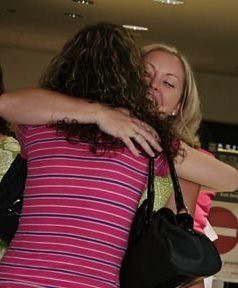 Ten of my best girls had finally arrived. I was ecstatic!

Warning: The entries about this weekend are going to be long ones, and very picture laden, so for the sake of downloading time I am going to break it up into several entries.

I hope you all have high speed internet.

Note: These photos are a conglomeration of mine, Kelly’s, Emily, Steph’s and Allison’s pictures taken from the weekend. I have no idea anymore whose are whose, so let me give a blanket “Thank you!” to the other girls for letting me steal their pics! 😀

« PS
BhamGTG II: Shower the People you Love with Love »

« PS • BhamGTG II: Shower the People you Love with Love »