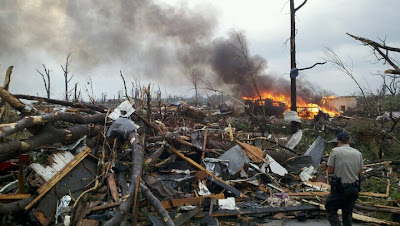 Tornadoes ripped across the South yesterday leaving inconceivable damage and destruction in their paths. My state of Alabama was hit particularly hard. I am thanking God today that my family and so many of my friends were protected from any of the storm damage. From the early morning hours until after dark last night our tornado sirens kept going off repeatedly to warn us of another one coming. Let me say that James Spann is THE best meteorologist, period. I love that man. We sat in our basement and watched in real time on the ABC 3340 skycams as two separate tornadoes ravaged both Cullman, Alabama AND Tuscaloosa, Alabama. You can click those links to see what we were watching as it was happening.

Thankfully we were unscathed. Other people were not.

But my heart is heavy as the sun is setting on another day for those people who might still be trapped in their homes or businesses under piles of debris. I feel that same sense of urgency that I felt when Hurricane Katrina hit the Gulf Coast and for DAYS afterward nobody in the rest of the world seemed to mind very much. When I turned on Good Morning America this morning and saw a reporter buying “Middleton Mini” cupcakes in London in preparation for the royal wedding I wanted to throw something at my tv screen.

There aren’t really words for how devastating this severe weather event was for parts of this state.

Generational? Once in a lifetime? Catastrophic? Mind-blowing? Unbelievable.

We are used to tornadoes in the south. They happen pretty frequently. But this was not just ONE tornado hitting ONE town and leveling a few of homes and businesses in a contained area.

Yesterday multiple tornadoes leveled multiple cities in multiple states, but especially in Alabama. It’s the worst severe weather outbreak in decades. A total of 18 counties in Alabama were affected by this storm system. The tracks of this storm are visible from a satellite 22,500 miles above the equator. I hope to never see anything like it again in my lifetime. Or Garrett’s lifetime and beyond.

Cities all across the state are completely devastated to nothing but rubble in so many areas. The death toll right now is hovering somewhere around the 200 mark for Alabama alone. My cousin called me this morning to say she was going to help her mother who is a county coroner tag bodies in DeKalb County. When she left Rainsville this afternoon she called me to talk about it and said “33”. And that was all she had to say. I knew what she meant. From there she was heading to Tuscaloosa to help out this afternoon. Tuscaloosa is getting the most coverage but the destruction is much more widespread than just that one city. The small towns that have taken direct hits are the ones who need help the most because they don’t have the resources like bigger cities (especially ones that are located near other big cities) have to offer. The storms did not discriminate, and at times back to back tornadoes pounded the same cities over and over with a one-two sucker punch.

At the peak last night over 400,000 people were without power in Alabama. Water intake valves were destroyed so the water supply is becoming limited and contaminated in certain areas. City infrastructures have been obliterated. Hospitals are full of critical injuries. Schools have suffered major damage and will have to be rebuilt. Telephone lines and cell phone towers are down so rescue workers cannot communicate with one another. Gasoline pumps have been destroyed so people are hoarding gas in some areas, causing the emergency vehicles to not be able to refuel. Natural gas pipelines were damaged and leaking so there are concerns over what might result if an explosion happened.

I could go on and on. Thank God the nuclear power plant backup generators at Brown’s Ferry didn’t fail or take a direct hit.

But the fact is– it’s bad. It’s really really bad for parts of my state right now.

This is a photo of the closet where J’s coworker’s father and sister rode out the tornado as it passed over their home. Imagine being in your place of safety and opening your eyes to see daylight all around you. Then you realize the only walls of your house left standing are the ones that are right around you. Place of safety indeed. 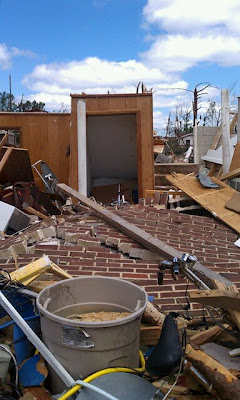 I realize that if you aren’t personally affected or know people who are affected by a tragedy then it doesn’t seem like such a big deal. I’d like to ask my readers and all of you kindhearted bloggers out there to take a minute and look through some photos of what is happening, or watch a video of the tornadoes as they tore through to get an idea of the magnitude of the damage.

This video is particularly disturbing to watch.

Please spread the word about this tragedy that the southern states are facing right now. Please help us raise some awareness about this and try to find a way to help if you are able.

Here’s a simple way you can help right now: Text “REDCROSS” to 90999 to make a $10 donation to the American Red Cross if you want to help those affected by the storm that hit Alabama.

Or just simply stop and say a prayer for all the people who have lost their loved ones, their homes, their pets, their places of work, their cars…etc. And while you’re there it wouldn’t hurt to say a prayer of thanks for all of the blessings in your life right now.

If you want more in-depth information, there are lots of other websites who have done a better job than I ever could.

Here are a few you can visit for more ways to help:

Thanks so much guys. It would mean a lot to me and other Alabama bloggers if you could send some thoughts and prayers and aid our way right now. People all across the Birmingham area and beyond are sitting on go waiting on the search and rescue missions to come to an end so that we can go in and help with the cleanup and rebuilding process. Tractor trailer loads of help are just a few miles away once it is safe for volunteers to go inside the hardest hit areas. Hands On Birmingham reported on their facebook page that they have over 3,400 local people who have volunteered today to help with the cleanup.

I love Alabamians. We are strong. We are united. We are benevolent and blessed in many ways. We are southern and our hospitality will extend far into the communities who need us the most. There is no doubt about that. We will get through this.

« Link up at the 4th installment of the Garden Party!
Ask and Ye Shall Receive »

« Link up at the 4th installment of the Garden Party! • Ask and Ye Shall Receive »