Guess who else is jumping on the rustic Christmas decor bandwagon? Bring on the burlap, baby! I tried to pull out all the old red and green stuff this year. I truly did. I stripped my mantel barenekkid and started adding red things to it, but the more I added, the uglier it got, so I took it all down and put my blue stuff back up along with a few other pieces to really weather it out. So here is where I landed– somewhere between Pottery Barn and Country Living with a twist of Vermont. 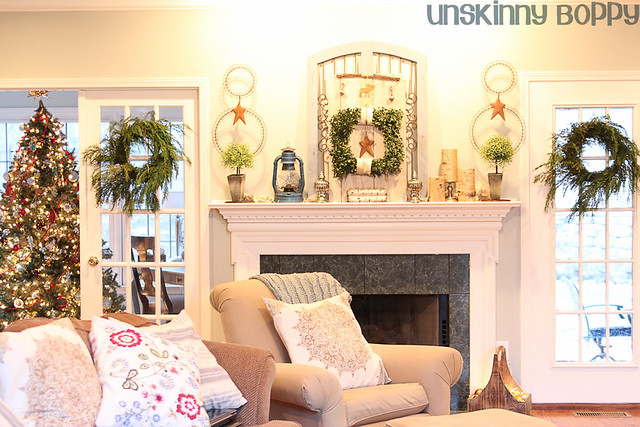 I don’t know why that picture above has such a yellow cast to it that I can’t seem to photochop out. Here is a better shot of the actual wall color (but I like the fact that my Christmas tree is showing in the pic above so I’m using it anyway!) Wouldn’t you know the shot with the best composition has the worst exposure. Eh well.

I’m glad that I put away the red this year, because this mantel makes me extremely happy. It makes me wish we would get three feet of snow and Christmas carolers a-knocking on the door. But considering where I live, I doubt either of those will ever happen. 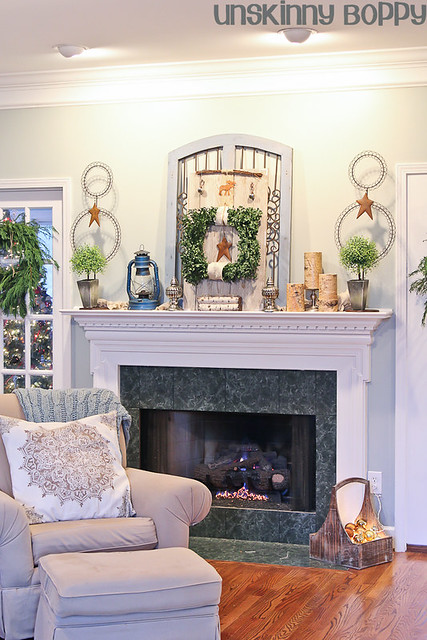 Lemme break down this mantel decor for you really quick: 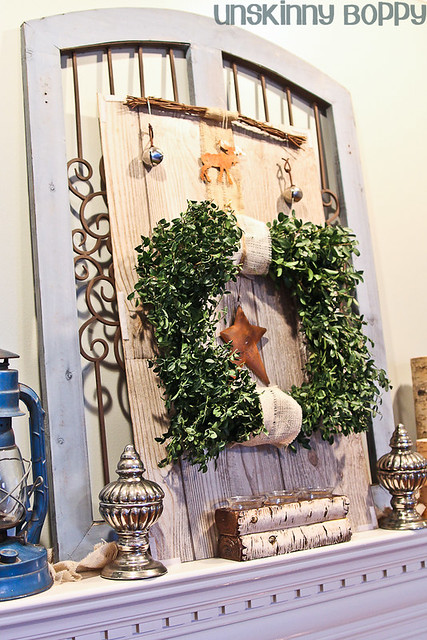 In the middle is the light blue wood and wrought iron piece that I got from Hobby Lobby last year. I used a piece of grey wood paneling leftover from our old lake cabin remodeling project as another layer to hang the boxwood wreath. I never thought this grey paneling would come in handy again, but here it is. Sometimes it pays to be a hoarder. Actually it was being used as a backerboard for one of J’s window shadowboxes so it still has some velcro stuck on it around the edges. I’m not too concerned about it. Even though it’s as fake as can be, in this small of a dose I think it gives the illusion of being a few old pieces of barnwood. 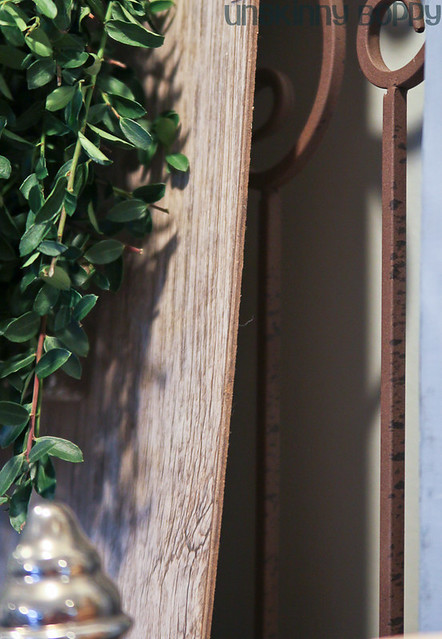 Layered over that is a DIY Boxwood wreath made from the square thing that holds the garbage bags in the outdoor trash can. No joke!

I just followed the same pattern as all my other DIY evergreen wreaths and wired bundles of boxwoods around it like this: 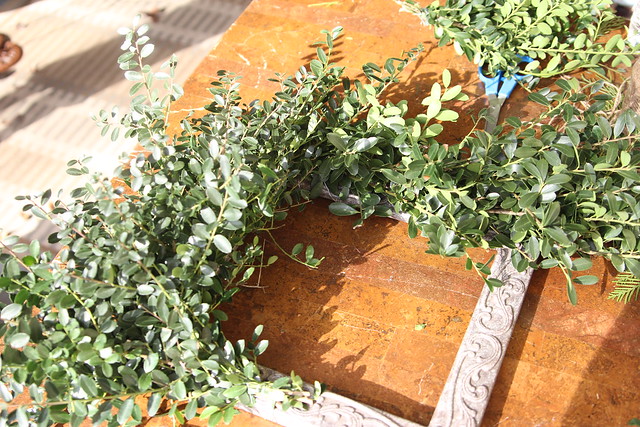 And once it was all together I gave it a big haircut to give it more of a square shape then added two pieces of burlap and a star hanging in the middle. Very very simple. To dress it up a little I hung a Blair Witch Project type bundle of sticks adorned with a copper reindeer ornament and two jingle bells from last year’s Polar Express ride. 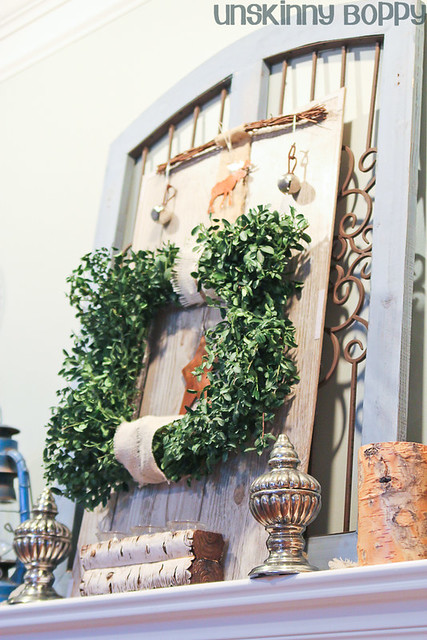 In front of it all I stacked two fake birch bark candle holders with tealights inside. ` 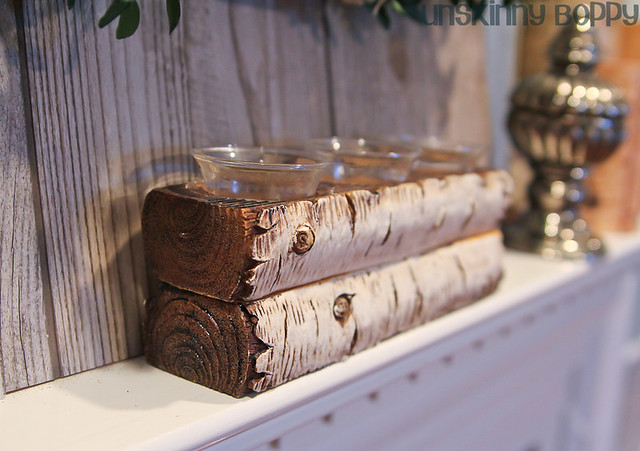 And on either side are my two pretty little silver compliment jars bought from Rhoda’s Biltmore Inspiration’s Party. I love these!

On the right are more fake birch bark candles recycled from last year’s mantel. Then I found these two double circle thingies (official term) that reminded me of french wire snowmen. 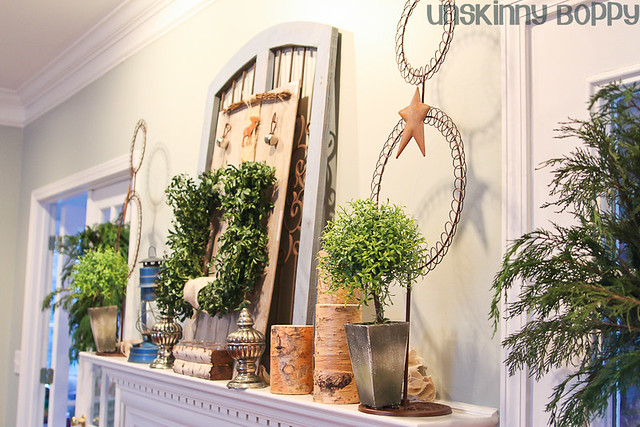 I realize snowmen have three circles, so I guess these are more like decapitated snowmen thingies. Or, one legged stick figures? Anyway, I liked their shape, so I stuck them up there to round things out. I’m thinking I’ll put my Christmas cards into the wire part when they start rolling in. Underneath are two fake boxwood topiaries that usually live in my dining room. Mixing fake plants with real plants is one of the simplest ways to trick people into believing you used all real stuff. Hopefully. 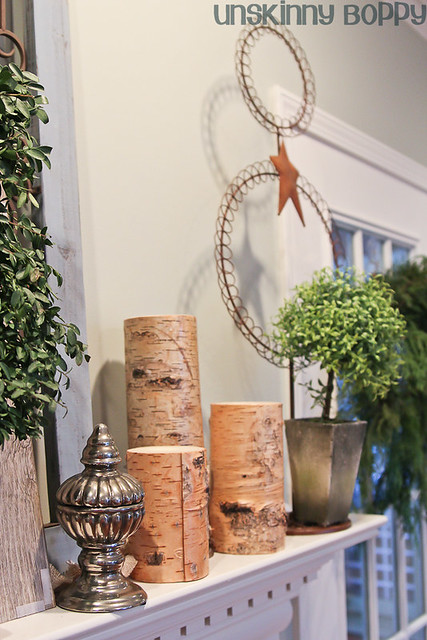 On the left is the Alabama Estate Sale blue lantern with the dirt knocked off of it. It’s such a pretty blue once I cleaned it up! 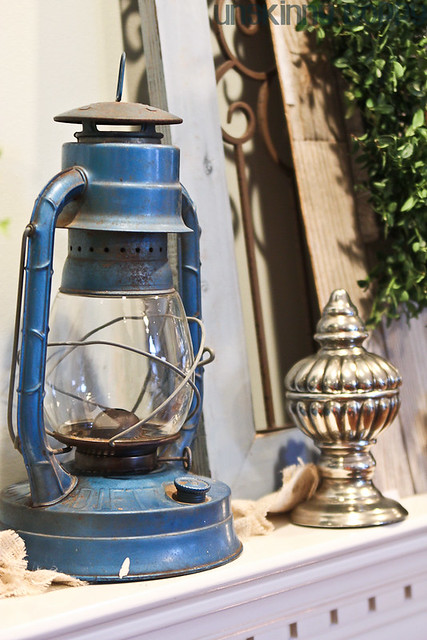 So there you go. That’s pretty much it. Oh, and underneath it all I stuck the DIY Ruffled burlap garland that I made for my fall mantel. 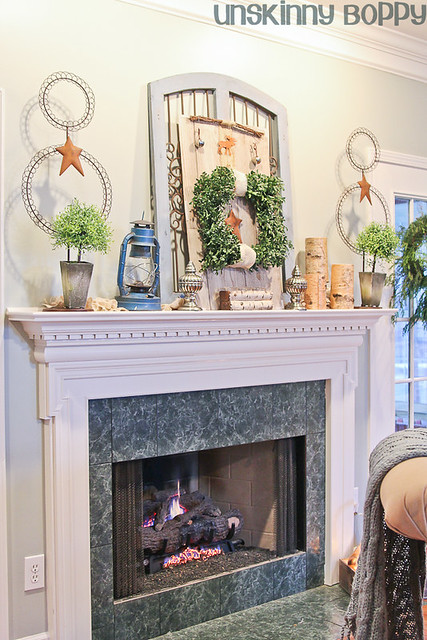 I hung the two Leland cypress wreaths I made over the weekend on the two doors on either side of the fireplace. For a second I thought about decorating them with something, but then I decided I liked them just as they are. Hang loose, Leland. 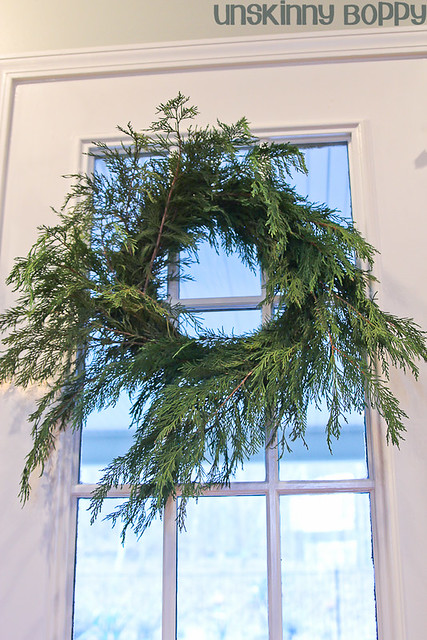 The other one looks nice with my tree in the background. 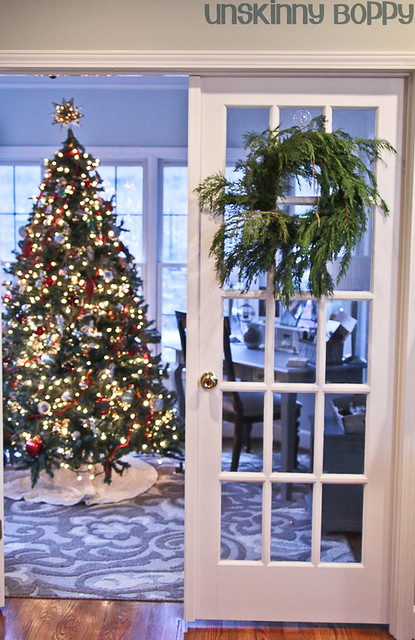 And I dumped some gold glittery ornaments in a basket along with some white lights for a little extra glow on the hearth. 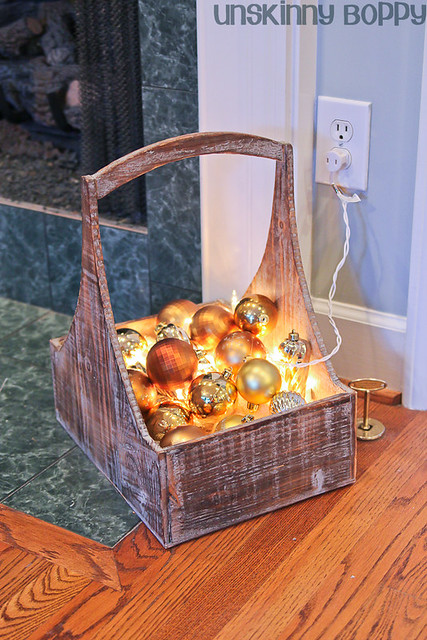 And there you have it. My 2011 Christmas mantel all finished. Can’t wait to see all the other pretty mantels out there on the link parties this year. Merry Christmas y’all!

« Show your Glow: A Christmas Tree Link Party
Help me help you! »

« Show your Glow: A Christmas Tree Link Party • Help me help you! »