Last week I hopped around the internet from Rhoda at Southern Hospitality’s blog over to a new (to me) blog called Design Indulgence by Sherry Hart. I fell in love with her style, and after I pinned that picture of her beautiful living room she went straight on the Google Reader. I loved that she had written a “Now and Then” type post that showed her old design tastes versus her new updated style. It would be really interesting to see how one person’s design styles evolve throughout their lifetime.

The interior decor at our old house was very burgundy and had lots of chotchkis scattered everywhere in the beginning. I scaled it way back when we put it on the market, and now I am trying hard to edit myself and so I don’t go back to the “every surface covered with crap” look. But at the same time, I don’t want the new house to feel bare. It’s a balance that is still a work in progress for me. I’ll get there eventually.

I’d like to do my own version of Sherry Hart’s Then and Now, so here are some pictures of the old foyer: 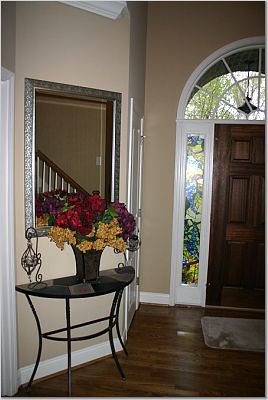 The paint color at the old house was Sherwin Williams Latte. 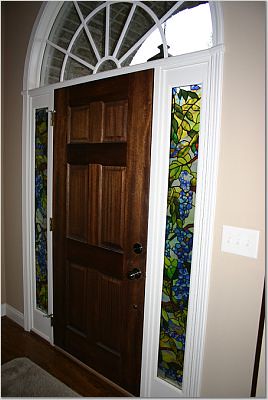 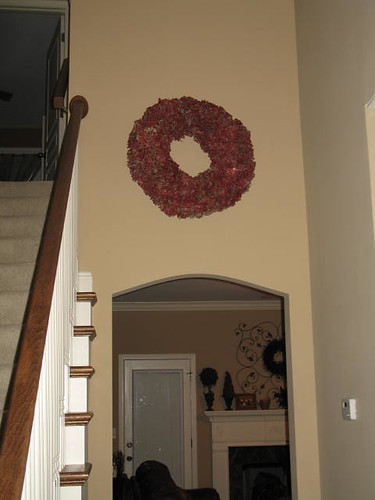 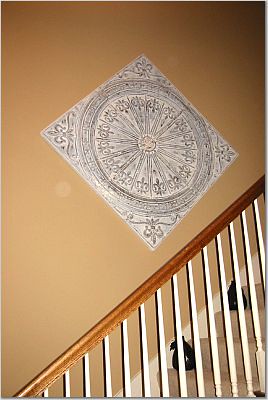 And finally, the infamous Naughty Ledge! 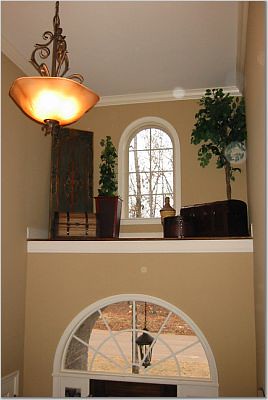 The foyer at this house is VERY similar to our old house, but better in so many ways. The biggest advantage is the staircase running perpendicular to the front door instead of meeting it head on. I like that people aren’t greeted by a set of steps when they come in the front door. I also like that the powder room door doesn’t open right up into the foyer so everyone who uses the facilities at the house doesn’t have to worry who might be listening in during a party. This foyer is also wide open to the living room so it doesn’t close off the space like it did at the old house. Much better. 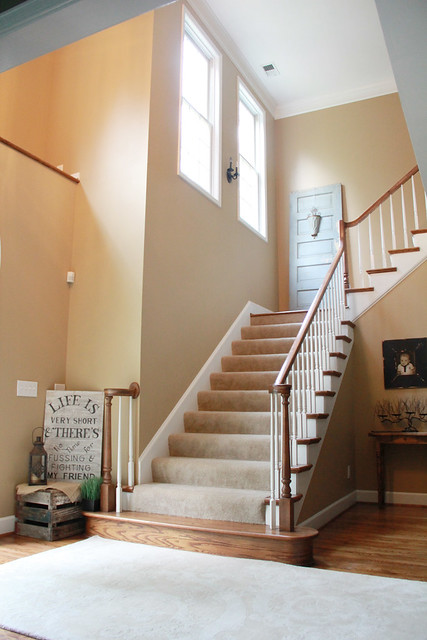 I love having side light plantation blinds instead of the grapevine patterned faux stained glass film covering that we had before. The two things about the new house that I would change? The dark beige paint color and the ugly steel front door. I really miss my pretty mahogany front door. It’s on the to-do list, but in all honestly I’m not too concerned about it since most all of our guests arrive through the back door anyway. Not that many people actually come in our front door. Really the only people who have seen it are the HVAC guys, the guy who installed the storm door, the termite inspector, the pizza delivery man and two nice ladies in full pantyhose and heels who hiked up my driveway and staircase to try to convert me to become a Jehovah’s Witness. I felt so bad for them I actually listened to their entire spiel. 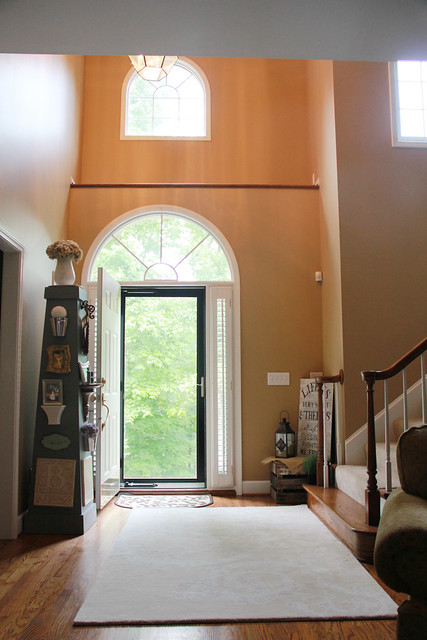 I love this 5×8 Cosa Bella cream and beige rug that I bought during The Great Rug Hunt of 2010. It’s got this slightly contrasting filigree pattern that is really unique and beautiful. And the quality is a lot better than the cheap rugs I bought for the dining room. I can’t decide if I like it better in the sunroom or the foyer so I switch it back and forth. It’s heavy! 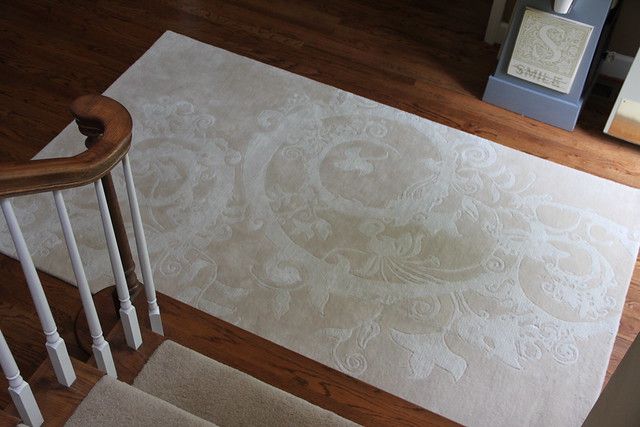 I like that I switched out the burgundy fake flowers and slate table for the wooden kidney shaped side table. Much better. I do still have the fake flowers, but they are tucked away in a little niche where they aren’t the first thing you see when you walk through the door. You can actually see them peeking out the right side of this photo! 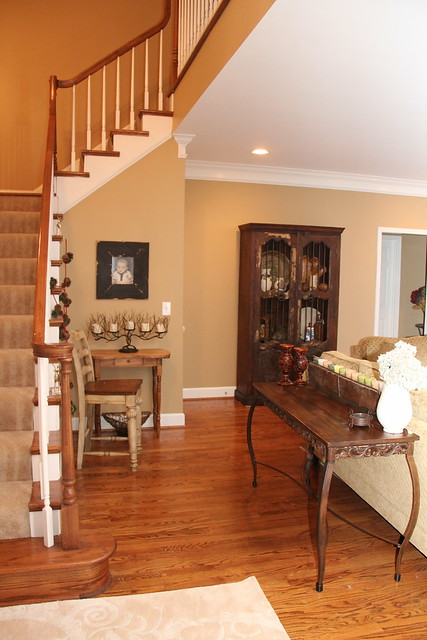 It’s a two story foyer, with a ledge over the front door just like our old house. I haven’t decorated up there at all, mainly because I promised my husband after he climbed up the 14 foot ladder to decorate our old house naughty ledge that he would never have to do it again. I aim to keep that promise, so for now it’s bare up there. And I’m kind of ok with that. I need something somewhere, but until I decide what that might be it will just stay nekkid. 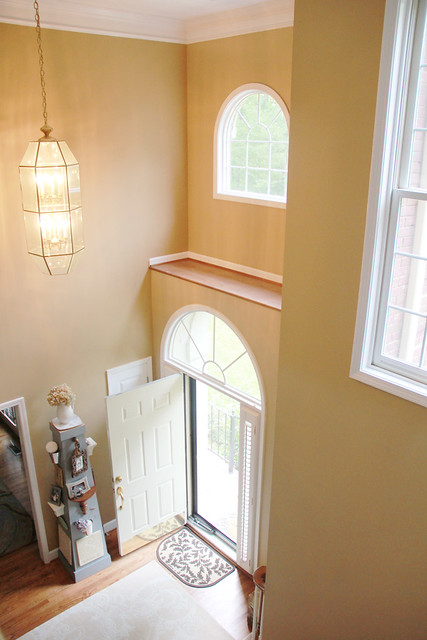 If you’ve been around here very long then you know I love architectural pieces as wall decoration almost as much as I love my pantsless toddler. 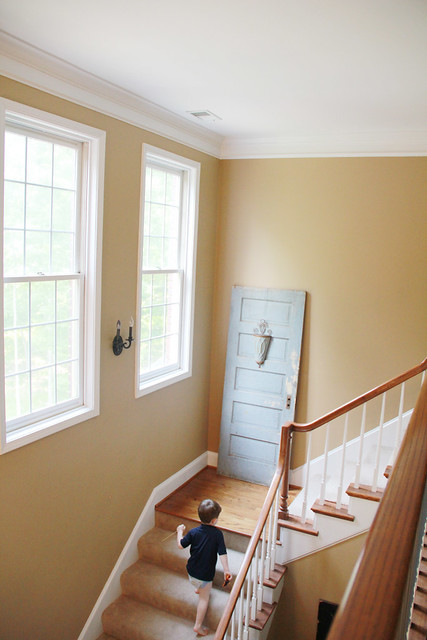 At the landing where the staircase turns I got J to attach the beautiful door that he surprised me with from Southern Accents in Cullman a few months ago. He used zip ties attached to hooks in the studs so it’s not in danger of falling and crushing somebody who walks up the steps. 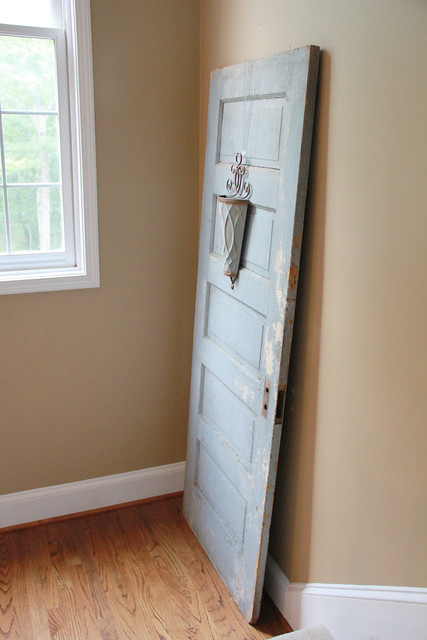 I saw these doors on their facebook page, and I was DYING to have one. But, unfortunately, they sold out before I was able to drive up there and get one. Cullman is about an hour and a half from my house. As it turns out, my incredibly thoughtful husband drove up to Cullman the day after they were posted on facebook and bought one just for me, in the exact color that I wanted. 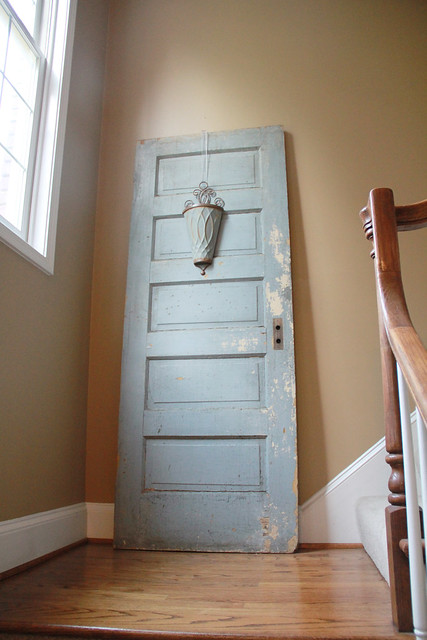 He brought it home and had it sitting in the sunroom waiting on me to arrive. I wigged out a little bit when I saw it! I was so excited to see one of these sold-out unique treasures sitting in our home. He kept it a secret, and even sacrificed an off day at work to go up and buy this for me. How sweet was that? I am a lucky lucky woman. Thank you so much, babe! 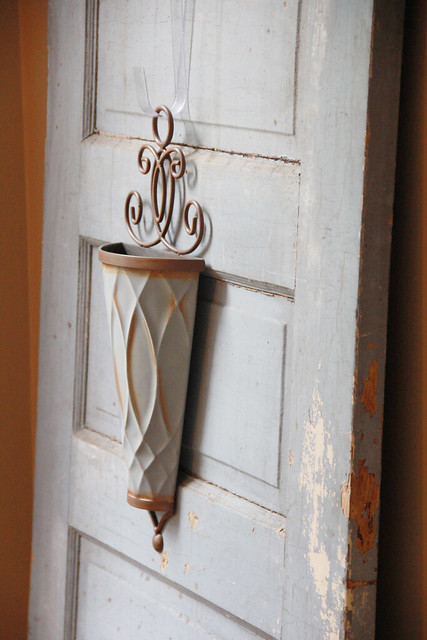 I was going to decorate it with photo frames similar to the door-turned-picture-hanger that I am using in my office. But after I hung this simple blue Willow House Morningside door bucket on it, I’m really digging the simplicity of it. I’m sure at some point in the future I’ll change that, but for now I’m going to use the K.I.S.S. method. Besides, I have the cluttered photo collage on a column at the bottom of the stairs that is already covered in pictures. 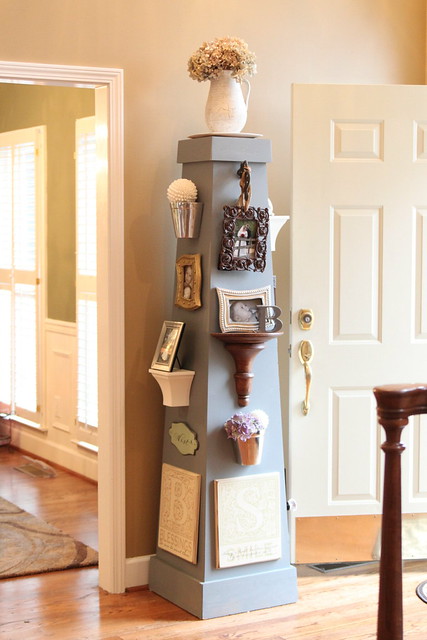 All in all, I’m really happy with the new foyer. Here are the things I want to eventually change:

Finally, here is the latest edition to the foyer. 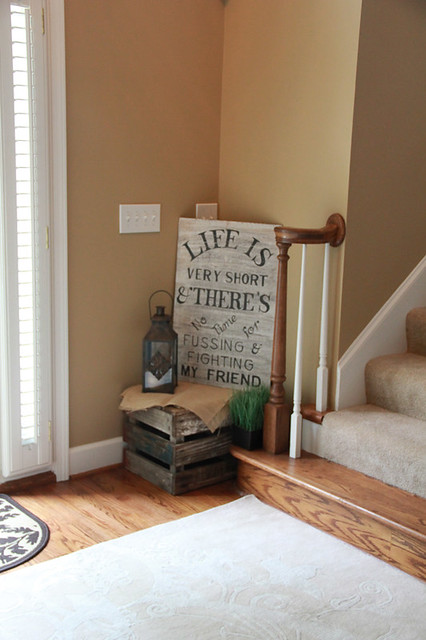 Today I was having an impromptu photo shoot by the glass door since the light is best there. I was using this crate that I bought a few weeks ago flipped upside down to shoot some pictures. I realized that I really liked the way it looked by the staircase, so I decided to leave it there with a few other things on top. I got this weathered sign with some Beatles lyrics painted on it.

In the past few months this has truly become my motto for life, so it’s great to have it posted right beside my front door. 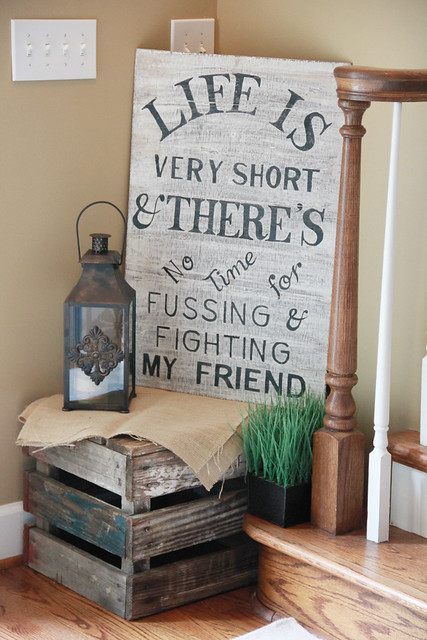 If more people lived by the “life is very short so there’s no time for fussing and fighting my friend” motto I have a feeling the world might be a better place.

I know my foyer and my life is much grander because of it.